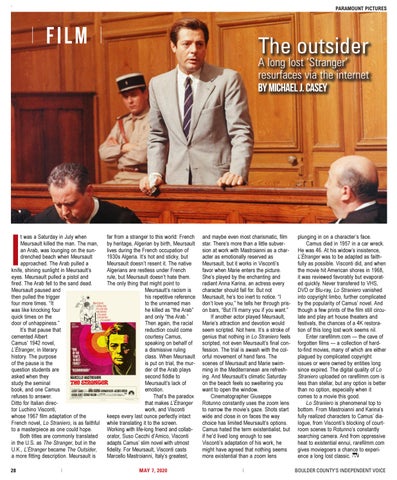 A long lost ‘Stranger’ resurfaces via the internet by Michael J. Casey

t was a Saturday in July when Meursault killed the man. The man, an Arab, was lounging on the sundrenched beach when Meursault approached. The Arab pulled a knife, shining sunlight in Meursault’s eyes. Meursault pulled a pistol and fired. The Arab fell to the sand dead. Meursault paused and then pulled the trigger four more times. “It was like knocking four quick times on the door of unhappiness.” It’s that pause that cemented Albert Camus’ 1942 novel, L’Étranger, in literary history. The purpose of the pause is the question students are asked when they study the seminal book, and one Camus refuses to answer. Ditto for Italian director Luchino Visconti, whose 1967 film adaptation of the French novel, Lo Straniero, is as faithful to a masterpiece as one could hope. Both titles are commonly translated in the U.S. as The Stranger, but in the U.K., L’Étranger became The Outsider, a more fitting description. Meursault is 28

far from a stranger to this world: French by heritage, Algerian by birth, Meursault lives during the French occupation of 1930s Algeria. It’s hot and sticky, but Meursault doesn’t resent it. The native Algerians are restless under French rule, but Meursault doesn’t hate them. The only thing that might point to Meursault’s racism is his repetitive reference to the unnamed man he killed as “the Arab” and only “the Arab.” Then again, the racial reduction could come courtesy Camus, speaking on behalf of a dismissive ruling class. When Meursault is put on trial, the murder of the Arab plays second fiddle to Meursault’s lack of emotion. That’s the paradox that makes L’Étranger work, and Visconti keeps every last ounce perfectly intact while translating it to the screen. Working with life-long friend and collaborator, Suso Cecchi d’Amico, Visconti adapts Camus’ slim novel with utmost fidelity. For Meursault, Visconti casts Marcello Mastroianni, Italy’s greatest, MAY 7, 2020

and maybe even most charismatic, film star. There’s more than a little subversion at work with Mastroianni as a character as emotionally reserved as Meursault, but it works in Visconti’s favor when Marie enters the picture. She’s played by the enchanting and radiant Anna Karina, an actress every character should fall for. But not Meursault, he’s too inert to notice. “I don’t love you,” he tells her through prison bars, “But I’ll marry you if you want.” If another actor played Meursault, Marie’s attraction and devotion would seem scripted. Not here. It’s a stroke of genius that nothing in Lo Straniero feels scripted, not even Meursault’s final confession. The trial is awash with the colorful movement of hand fans. The scenes of Meursault and Marie swimming in the Mediterranean are refreshing. And Meursault’s climatic Saturday on the beach feels so sweltering you want to open the window. Cinematographer Giuseppe Rotunno constantly uses the zoom lens to narrow the movie’s gaze. Shots start wide and close in on faces the way choice has limited Meursault’s options. Camus hated the term existentialist, but if he’d lived long enough to see Visconti’s adaptation of his work, he might have agreed that nothing seems more existential than a zoom lens I

plunging in on a character’s face. Camus died in 1957 in a car wreck. He was 46. At his widow’s insistence, L’Étranger was to be adapted as faithfully as possible. Visconti did, and when the movie hit American shores in 1968, it was reviewed favorably but evaporated quickly. Never transfered to VHS, DVD or Blu-ray, Lo Straniero vanished into copyright limbo, further complicated by the popularity of Camus’ novel. And though a few prints of the film still circulate and play art house theaters and festivals, the chances of a 4K restoration of this long lost work seems nil. Enter rarefilmm.com — the cave of forgotten films — a collection of hardto-find movies, many of which are either plagued by complicated copyright issues or were owned by entities long since expired. The digital quality of Lo Straniero uploaded on rarefilmm.com is less than stellar, but any option is better than no option, especially when it comes to a movie this good. Lo Straniero is phenomenal top to bottom. From Mastroianni and Karina’s fully realized characters to Camus’ dialogue, from Visconti’s blocking of courtroom scenes to Rotunno’s constantly searching camera. And from oppressive heat to existential ennui, rarefilmm.com gives moviegoers a chance to experience a long lost classic. BOULDER COUNTY’S INDEPENDENT VOICE

Special needs students lacking physical school environment, letters, opinions, what to do when there's nothing to do, Savage Love, Real Astr...

Special needs students lacking physical school environment, letters, opinions, what to do when there's nothing to do, Savage Love, Real Astr...