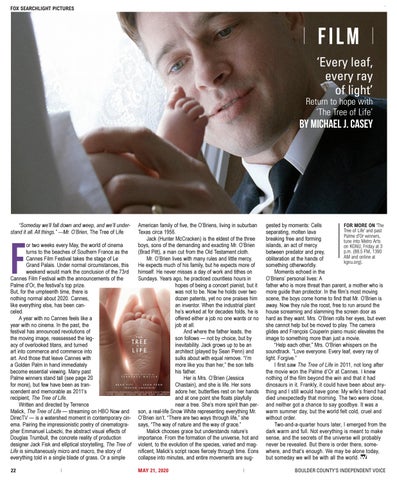 ‘Every leaf, every ray of light’

Return to hope with ‘The Tree of Life’

“Someday we’ll fall down and weep, and we’ll understand it all. All things.” —Mr. O’Brien, The Tree of Life

or two weeks every May, the world of cinema turns to the beaches of Southern France as the Cannes Film Festival takes the stage of Le Grand Palais. Under normal circumstances, this weekend would mark the conclusion of the 73rd Cannes Film Festival with the announcements of the Palme d’Or, the festival’s top prize. But, for the umpteenth time, there is nothing normal about 2020. Cannes, like everything else, has been canceled. A year with no Cannes feels like a year with no cinema. In the past, the festival has announced revolutions of the moving image, reassessed the legacy of overlooked titans, and turned art into commerce and commerce into art. And those that leave Cannes with a Golden Palm in hand immediately become essential viewing. Many past Palme winners stand tall (see page 20 for more), but few have been as transcendent and memorable as 2011’s recipient, The Tree of Life. Written and directed by Terrence Malick, The Tree of Life — streaming on HBO Now and DirecTV — is a watershed moment in contemporary cinema. Pairing the impressionistic poetry of cinematographer Emmanuel Lubezki, the abstract visual effects of Douglas Trumbull, the concrete reality of production designer Jack Fisk and elliptical storytelling, The Tree of Life is simultaneously micro and macro, the story of everything told in a single blade of grass. Or a simple 22

American family of five, the O’Briens, living in suburban Texas circa 1956. Jack (Hunter McCracken) is the eldest of the three boys, sons of the demanding and exacting Mr. O’Brien (Brad Pitt), a man cut from the Old Testament cloth. Mr. O’Brien lives with many rules and little mercy. He expects much of his family, but he expects more of himself. He never misses a day of work and tithes on Sundays. Years ago, he practiced countless hours in hopes of being a concert pianist, but it was not to be. Now he holds over two dozen patents, yet no one praises him an inventor. When the industrial plant he’s worked at for decades folds, he is offered either a job no one wants or no job at all. And where the father leads, the son follows — not by choice, but by inevitability. Jack grows up to be an architect (played by Sean Penn) and sulks about with equal remove. “I’m more like you than her,” the son tells his father. Her is Mrs. O’Brien (Jessica Chastain), and she is life. Her sons adore her, butterflies rest on her hands and at one point she floats playfully near a tree. She’s more spirit than person, a real-life Snow White representing everything Mr. O’Brien isn’t. “There are two ways through life,” she says, “The way of nature and the way of grace.” Malick chooses grace but understands nature’s importance. From the formation of the universe, hot and violent, to the evolution of the species, varied and magnificent, Malick’s script races fiercely through time. Eons collapse into minutes, and entire movements are sugMAY 21, 2020

FOR MORE ON ‘The gested by moments: Cells Tree of Life’ and past separating, molten lava Palme d’Or winners, breaking free and forming tune into Metro Arts islands, an act of mercy on KGNU, Friday at 3 p.m. (88.5 FM, 1390 between predator and prey, AM and online at obliteration at the hands of kgnu.org). something otherworldly. Moments echoed in the O’Briens’ personal lives: A father who is more threat than parent, a mother who is more guide than protector. In the film’s most moving scene, the boys come home to find that Mr. O’Brien is away. Now they rule the roost, free to run around the house screaming and slamming the screen door as hard as they want. Mrs. O’Brien rolls her eyes, but even she cannot help but be moved to play. The camera glides and François Couperin piano music elevates the image to something more than just a movie. “Help each other,” Mrs. O’Brien whispers on the soundtrack. “Love everyone. Every leaf, every ray of light. Forgive.” I first saw The Tree of Life in 2011, not long after the movie won the Palme d’Or at Cannes. I knew nothing of the film beyond the win and that it had dinosaurs in it. Frankly, it could have been about anything and I still would have gone: My wife’s friend had died unexpectedly that morning. The two were close, and neither got a chance to say goodbye. It was a warm summer day, but the world felt cold, cruel and without order. Two-and-a-quarter hours later, I emerged from the dark warm and full. Not everything is meant to make sense, and the secrets of the universe will probably never be revealed. But there is order there, somewhere, and that’s enough. We may be alone today, but someday we will be with all the world. BOULDER COUNTY’S INDEPENDENT VOICE