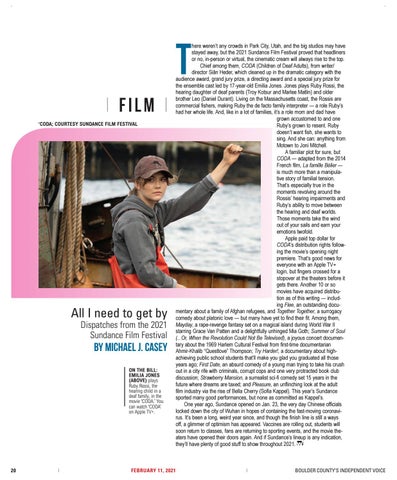 All I need to get by

Dispatches from the 2021 Sundance Film Festival

by Michael J. Casey ON THE BILL: EMILIA JONES (ABOVE) plays Ruby Rossi, the hearing child in a deaf family, in the movie ‘CODA.’ You can watch ‘CODA’ on Apple TV+.

here weren’t any crowds in Park City, Utah, and the big studios may have stayed away, but the 2021 Sundance Film Festival proved that headliners or no, in-person or virtual, the cinematic cream will always rise to the top. Chief among them, CODA (Children of Deaf Adults), from writer/ director Siân Heder, which cleaned up in the dramatic category with the audience award, grand jury prize, a directing award and a special jury prize for the ensemble cast led by 17-year-old Emilia Jones. Jones plays Ruby Rossi, the hearing daughter of deaf parents (Troy Kotsur and Marlee Matlin) and older brother Leo (Daniel Durant). Living on the Massachusetts coast, the Rossis are commercial fishers, making Ruby the de facto family interpreter — a role Ruby’s had her whole life. And, like in a lot of families, it’s a role mom and dad have grown accustomed to and one Ruby’s grown to resent. Ruby doesn’t want fish, she wants to sing. And she can: anything from Motown to Joni Mitchell. A familiar plot for sure, but CODA — adapted from the 2014 French film, La famille Bélier — is much more than a manipulative story of familial tension. That’s especially true in the moments revolving around the Rossis’ hearing impairments and Ruby’s ability to move between the hearing and deaf worlds. Those moments take the wind out of your sails and earn your emotions twofold. Apple paid top dollar for CODA’s distribution rights following the movie’s opening night premiere. That’s good news for everyone with an Apple TV+ login, but fingers crossed for a stopover at the theaters before it gets there. Another 10 or so movies have acquired distribution as of this writing — including Flee, an outstanding documentary about a family of Afghan refugees, and Together Together, a surrogacy comedy about platonic love — but many have yet to find their fit. Among them, Mayday, a rape-revenge fantasy set on a magical island during World War II starring Grace Van Patten and a delightfully unhinged Mia Goth; Summer of Soul (...Or, When the Revolution Could Not Be Televised), a joyous concert documentary about the 1969 Harlem Cultural Festival from first-time documentarian Ahmir-Khalib “Questlove” Thompson; Try Harder!, a documentary about highachieving public school students that’ll make you glad you graduated all those years ago; First Date, an absurd comedy of a young man trying to take his crush out in a city rife with criminals, corrupt cops and one very protracted book club discussion; Strawberry Mansion, a surrealist sci-fi comedy set 15 years in the future where dreams are taxed; and Pleasure, an unflinching look at the adult film industry via the rise of Bella Cherry (Sofia Kappel). This year’s Sundance sported many good performances, but none as committed as Kappel’s. One year ago, Sundance opened on Jan. 23, the very day Chinese officials locked down the city of Wuhan in hopes of containing the fast-moving coronavirus. It’s been a long, weird year since, and though the finish line is still a ways off, a glimmer of optimism has appeared. Vaccines are rolling out, students will soon return to classes, fans are returning to sporting events, and the movie theaters have opened their doors again. And if Sundance’s lineup is any indication, they’ll have plenty of good stuff to show throughout 2021.