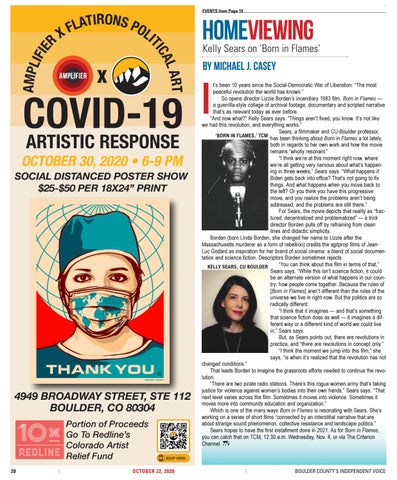 Kelly Sears on ‘Born in Flames’

t’s been 10 years since the Social-Democratic War of Liberation: “The most peaceful revolution the world has known.” So opens director Lizzie Borden’s incendiary 1983 film, Born in Flames — a guerrilla-style collage of archival footage, documentary and scripted narrative that’s as relevant today as ever before. “And now what?” Kelly Sears says. “Things aren’t fixed, you know. It’s not like we had this revolution, and everything works.” Sears, a filmmaker and CU-Boulder professor, ‘BORN IN FLAMES,’ TCM has been thinking about Born in Flames a lot lately, both in regards to her own work and how the movie remains “wholly resonant.” “I think we’re at this moment right now, where we’re all getting very nervous about what’s happening in three weeks,” Sears says. “What happens if Biden gets back into office? That’s not going to fix things. And what happens when you move back to the left? Or you think you have this progressive move, and you realize the problems aren’t being addressed, and the problems are still there.” For Sears, the movie depicts that reality as “fractured, decentralized and problematized” — a trick director Borden pulls off by refraining from clean lines and didactic simplicity. Borden (born Linda Borden, she changed her name to Lizzie after the Massachusetts murderer as a form of rebellion) credits the agitprop films of JeanLuc Godard as inspiration for her brand of social cinema: a blend of social documentation and science fiction. Descriptors Borden sometimes rejects. “You can think about this film in terms of that,” KELLY SEARS, CU BOULDER Sears says. “While this isn’t science fiction, it could be an alternate version of what happens in our country: how people come together. Because the rules of [Born in Flames] aren’t different than the rules of the universe we live in right now. But the politics are so radically different. “I think that it imagines — and that’s something that science fiction does as well — it imagines a different way or a different kind of world we could live in,” Sears says. But, as Sears points out, there are revolutions in practice, and “there are revolutions in concept only.” “I think the moment we jump into this film,” she says, “is when it’s realized that the revolution has not changed conditions.” That leads Borden to imagine the grassroots efforts needed to continue the revolution. “There are two pirate radio stations. There’s this rogue women army that’s taking justice for violence against women’s bodies into their own hands,” Sears says. “That next level varies across the film. Sometimes it moves into violence. Sometimes it moves more into community education and organization.” Which is one of the many ways Born in Flames is resonating with Sears. She’s working on a series of short films “connected by an interstitial narrative that are about strange sound phenomenon, collective resistance and landscape politics.” Sears hopes to have the first installment done in 2021. As for Born in Flames, you can catch that on TCM, 12:30 a.m. Wednesday, Nov. 4, or via The Criterion Channel.