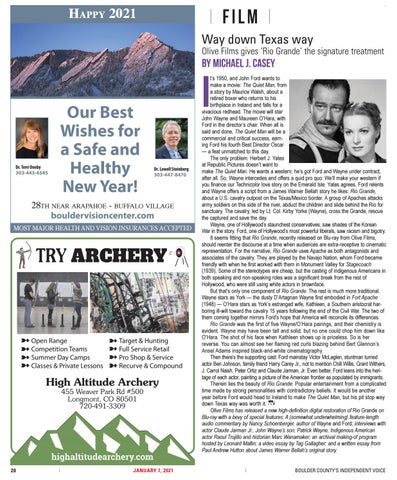 Our Best Wishes for a Safe and Healthy New Year!

t’s 1950, and John Ford wants to make a movie: The Quiet Man, from a story by Maurice Walsh, about a retired boxer who returns to his birthplace in Ireland and falls for a vivacious redhead. The movie will star John Wayne and Maureen O’Hara, with Ford in the director’s chair. When all is said and done, The Quiet Man will be a commercial and critical success, earning Ford his fourth Best Director Oscar — a feat unmatched to this day. The only problem: Herbert J. Yates at Republic Pictures doesn’t want to make The Quiet Man. He wants a western; he’s got Ford and Wayne under contract, after all. So, Wayne intercedes and offers a quid pro quo: We’ll make your western if you finance our Technicolor love story on the Emerald Isle. Yates agrees, Ford relents and Wayne offers a script from a James Warner Bellah story he likes: Rio Grande, about a U.S. cavalry outpost on the Texas/Mexico border. A group of Apaches attacks army soldiers on this side of the river, abduct the children and slide behind the Rio for sanctuary. The cavalry, led by Lt. Col. Kirby Yorke (Wayne), cross the Grande, rescue the captured and save the day. Wayne, one of Hollywood’s staunchest conservatives, saw shades of the Korean War in the story. Ford, one of Hollywood’s most powerful liberals, saw racism and bigotry. It seems fitting that Rio Grande, recently released on Blu-ray from Olive Films, should reenter the discourse at a time when audiences are extra-receptive to cinematic representation. For the narrative, Rio Grande uses Apache as both antagonists and associates of the cavalry. They are played by the Navajo Nation, whom Ford became friendly with when he first worked with them in Monument Valley for Stagecoach (1939). Some of the stereotypes are cheap, but the casting of indigenous Americans in both speaking and non-speaking roles was a significant break from the rest of Hollywood, who were still using white actors in brownface. But that’s only one component of Rio Grande. The rest is much more traditional. Wayne stars as York — the dusty D’Artagnan Wayne first embodied in Fort Apache (1948) — O’Hara stars as York’s estranged wife, Kathleen, a Southern aristocrat harboring ill-will toward the cavalry 15 years following the end of the Civil War. The two of them coming together mirrors Ford’s hope that America will reconcile its differences. Rio Grande was the first of five Wayne/O’Hara pairings, and their chemistry is evident. Wayne may have been tall and solid, but no one could chop him down like O’Hara. The shot of his face when Kathleen shows up is priceless. So is her reverse. You can almost see her flaming red curls blazing behind Bert Glennon’s Ansel Adams inspired black-and-white cinematography. Then there’s the supporting cast: Ford mainstay Victor McLaglen, stuntman turned actor Ben Johnson, family friend Harry Carey Jr., not to mention Chill Willis, Grant Withers, J. Carrol Naish, Peter Ortiz and Claude Jarman, Jr. Even better, Ford leans into the heritage of each actor, painting a picture of the American frontier as populated by immigrants. Therein lies the beauty of Rio Grande: Popular entertainment from a complicated time made by strong personalities with contradictory beliefs. It would be another year before Ford would head to Ireland to make The Quiet Man, but his pit stop way down Texas way was worth it. Olive Films has released a new high-definition digital restoration of Rio Grande on Blu-ray with a bevy of special features: A (somewhat underwhelming) feature-length audio commentary by Nancy Schoenberger, author of Wayne and Ford; interviews with actor Claude Jarman Jr., John Wayne’s son, Patrick Wayne, Indigenous American actor Raoul Trujillo and historian Marc Wanamaker; an archival making-of program hosted by Leonard Maltin; a video essay by Tag Gallagher; and a written essay from Paul Andrew Hutton about James Warner Bellah’s original story. I