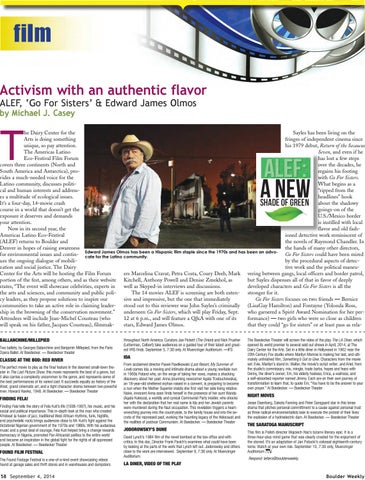 Activism with an authentic flavor

Sayles has been living on the he Dairy Center for the fringes of independent cinema since Arts is doing something his 1979 debut, Return of the Secaucus unique, so pay attention. The Americas Latino Seven, and even if he Eco-Festival Film Forum has lost a few steps covers three continents (North and over the decades, he South America and Antarctica), proregains his footing vides a much-needed voice for the with Go For Sisters. Latino community, discusses politiWhat begins as a cal and human interests and address“ripped from the es a multitude of ecological issues. headlines” hook It’s a four-day, 14-movie crash about the shadowy course in a world that doesn’t get the goings-on of the exposure it deserves and demands U.S./Mexico border your attention. is instilled with local flavor and old fashNow in its second year, the ioned detective work reminiscent of Americas Latino Eco-Festival (ALEF) returns to Boulder and the novels of Raymond Chandler. In Denver in hopes of raising awareness the hands of many other directors, Edward James Olmos has been a Hispanic film staple since the 1970s and has been an advofor environmental issues and contin- cate for the Latino community. Go For Sisters could have been mired ues the ongoing dialogue of mobiliby the procedural aspects of deteczation and social justice. The Dairy tive work and the political maneuCenter for the Arts will be hosting the Film Forum ers Marcelina Cravat, Petra Costa, Coury Deeb, Mark vering between gangs, local officers and border patrol, portion of the fest, among others, and as their website Kitchell, Anthony Powell and Denise Zmekhol, as but Sayles dispenses all of that in favor of deeply states, “The event will showcase celebrities, experts in well as Skyped-in interviews and discussions. developed characters and Go For Sisters is all the the arts and sciences, and community and public poliThe 14 movies ALEF is screening are both exten- stronger for it. cy leaders, as they propose solutions to inspire our sive and impressive, but the one that immediately Go For Sisters focuses on two friends — Bernice communities to take an active role in claiming leader- stood out to this reviewer was John Sayles’s criminally (LisaGay Hamilton) and Fontayne (Yolonda Ross, ship in the browning of the conservation movement.” underseen Go For Sisters, which will play Friday, Sept. who garnered a Spirit Award Nomination for her perAttendees will include Jean-Michel Cousteau (who 12 at 6 p.m., and will feature a Q&amp;A with one of its formance) — two girls who were so close as children will speak on his father, Jacques Cousteau), filmmakstars, Edward James Olmos. that they could “go for sisters” or at least pass as rela-

CLASSIC AT THE BOD: RED RIVER

The perfect movie to play as the final feature in the doomed small-town theater in The Last Picture Show, this movie represents the best of a genre, but it also carries a complexity uncommon to the genre, and represents some of the best performances of its varied cast. It succeeds equally as history of the West, grand cinematic art, and a tight character drama between two powerful men. Howard Hawks, 1948. At Boedecker. — Boedecker Theater

Finding Fela tells the story of Fela Kuti’s life (1938-1997), his music, and his social and political importance. This in-depth look at the man who created Afrobeat (a fusion of jazz, traditional West African rhythms, funk, highlife, and psychedelic rock) brings audiences close to Mr. Kuti’s fight against the dictatorial Nigerian government of the 1970s and 1980s. With his audacious music and a great deal of courage, Fela Kuti helped bring a change towards democracy in Nigeria, promoted Pan Africanist politics to the entire world and became an inspiration in the global fight for the rights of all oppressed people. At Boedecker. — Boedecker Theater

throughout North America. Curators Joe Pickett (The Onion) and Nick Prueher (Letterman, Colbert) take audiences on a guided tour of their latest and greatest VHS finds. September 5, 7:30 only. At Muenzinger Auditorium. —IFS

IDA From acclaimed director Pawel Pawlikowski (Last Resort, My Summer of Love) comes Ida, a moving and intimate drama about a young novitiate nun in 1960s Poland who, on the verge of taking her vows, makes a shocking discovery about her past. Anna (stunning newcomer Agata Trzebuchowska), an 18-year-old sheltered orphan raised in a convent, is preparing to become a nun when the Mother Superior insists she first visit her sole living relative. Naive, innocent Anna soon finds herself in the presence of her aunt Wanda (Agata Kulesza), a worldly and cynical Communist Party insider, who shocks her with the declaration that her real name is Ida and her Jewish parents were murdered during the Nazi occupation. This revelation triggers a heartwrenching journey into the countryside, to the family house and into the secrets of the repressed past, evoking the haunting legacy of the Holocaust and the realities of postwar Communism. At Boedecker. — Boedecker Theater

JODOROWSKY’S DUNE David Lynch’s 1984 film of the novel bombed at the box office and with critics. In this doc, Director Frank Pavich’s examines what could have been by looking at the parts of the work that Lynch left out. Jodorowsky and others close to the work are interviewed. September 9, 7:30 only. At Muenzinger Auditorium.

LA DINER, VIDEO OF THE PLAY

The Boedecker Theater will screen the video of the play The LA Diner, which opened its world premier to several sold out shows in April, 2014, at The Dairy Center for the Arts. Set in a little diner in Hollywood in 1962 near the 20th Century Fox studio where Marilyn Monroe is making her last, and ultimately unfinished film, Something’s Got to Give. Characters from the movie set: Evie, Marilyn’s stand in; Walter, the movie’s script writer; and Ariel, from the studio’s commissary, mix, mingle, trade barbs, hopes and fears with Denny, the diner’s owner; Em, his elderly hostess; Erica, a waitress; and a self-absorbed reporter named Jimmy. Each are on their own journey of transformation to learn that, to quote Em, “You have to be the answer to your own prayer.” At Boedecker. — Boedecker Theater

NIGHT MOVES Jesse Eisenberg, Dakota Fanning and Peter Sarsgaard star in this tense drama that pitches personal committment to a cause against personal trust as three radical environmentalists look to execute the protest of their lives: the explosion of a hydroelectric dam. At Boedecker. — Boedecker Theater

THE SARATOGA MANUSCRIPT This film is Polish director Wojciech Has’s bizarre literary epic. It is a three-hour-plus mind game that was clearly created for the enjoyment of the stoned. It’s an adaptation of Jan Potocki’s colossal eighteenth-century tome. Watch at your own risk. September 10, 7:30 only, Muenzinger Auditorium Respond: letters@boulderweekly.