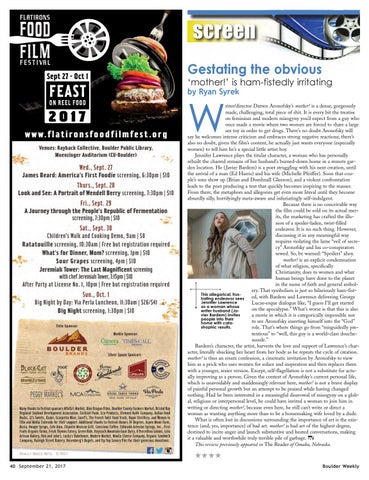 riter/director Darren Aronofsky’s mother! is a dense, gorgeously made, challenging, total piece of shit. It is every bit the treatise on feminism and modern misogyny you’d expect from a guy who once made a movie where two women are forced to share a large sex toy in order to get drugs. There’s no doubt Aronofsky will say he welcomes intense criticism and embraces strong negative reactions; there’s also no doubt, given the film’s content, he actually just wants everyone (especially women) to tell him he’s a special little artist boy. Jennifer Lawrence plays the titular character, a woman who has personally rebuilt the charred remains of her husband’s burned-down home in a remote garden location. He ( Javier Bardem) is a poet struggling with his next creation, until the arrival of a man (Ed Harris) and his wife (Michelle Pfeiffer). Soon that couple’s sons show up (Brian and Domhnall Gleeson), and a violent confrontation leads to the poet producing a text that quickly becomes inspiring to the masses. From there, the metaphors and allegories get even more literal until they become absurdly silly, horrifyingly meta-aware and infuriatingly self-indulgent. Because there is no conceivable way the film could be sold on its actual merits, the marketing has crafted the illusion of a spoiler-laden, twist-filled endeavor. It is no such thing. However, discussing it in any meaningful way requires violating the lame “veil of secrecy” Aronofsky and his co-conspirators sewed. So, be warned: “Spoilers” ahoy. mother! is an explicit condemnation of what religion, specifically Christianity, does to women and what human beings have done to the planet in the name of faith and general assholery. That symbolism is just so hilariously ham-fistThis allegorical, frused, with Bardem and Lawrence delivering George trating endeavor sees Jennifer Lawrence Lucas-esque dialogue like, “I guess I’ll get started as a woman whose on the apocalypse.” What’s worse is that this is also writer husband (Javier Bardem) invites a movie in which it is categorically impossible not people into their to see Aronofsky inserting himself into the “God” home with catastrophic results. role. That’s where things go from “misguidedly pretentious” to “well, this guy is a world-class douchenozzle.” Bardem’s character, the artist, harvests the love and support of Lawrence’s character, literally shucking her heart from her body as he repeats the cycle of creation. mother! is thus an ersatz confession, a cinematic invitation by Aronofsky to view him as a prick who uses women for solace and inspiration and then replaces them with a younger, sexier version. Except, self-flagellation is not a substitute for actually improving as a person. Given the context of Aronofsky’s current personal life, which is unavoidably and maddeningly relevant here, mother! is not a brave display of painful personal growth but an attempt to be praised while having changed nothing. Had he been interested in a meaningful disavowal of misogyny on a global, religious or interpersonal level, he could have invited a woman to join him in writing or directing mother!, because even here, he still can’t write or direct a woman as wanting anything more than to be a homemaking wife loved by a dude. What is often lost in discussions surrounding the importance of art is the existence (and, yes, importance) of bad art. mother! is bad art of the highest degree, destined to incite anger and launch substantive and heated conversations, making it a valuable and worthwhile truly terrible pile of garbage. This review previously appeared in The Reader of Omaha, Nebraska.