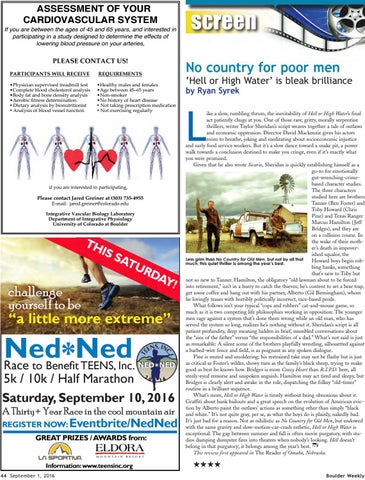 ASSESSMENT OF YOUR CARDIOVASCULAR SYSTEM

If you are between the ages of 45 and 65 years, and interested in participating in a study designed to determine the effects of lowering blood pressure on your arteries,

challenge yourself to be “a little more extreme”

screen No country for poor men

‘Hell or High Water’ is bleak brilliance by Ryan Syrek

ike a slow, rumbling thrum, the inevitability of Hell or High Water’s final act patiently chugs at you. One of those rare, gritty, morally serpentine thrillers, writer Taylor Sheridan’s script weaves together a tale of outlaws and economic oppression. Director David Mackenzie gives his actors room to breathe, joking and meditating about socioeconomic injustice and surly food service workers. But it’s a slow dance toward a snake pit, a power walk towards a conclusion destined to make you cringe, even if it’s exactly what you were promised. Given that he also wrote Sicario, Sheridan is quickly establishing himself as a go-to for emotionally gut-wrenching-crimebased character studies. The three characters studied here are brothers Tanner (Ben Foster) and Toby Howard (Chris Pine) and Texas Ranger Marcus Hamilton ( Jeff Bridges), and they are on a collision course. In the wake of their mother’s death in impoverished squalor, the Less grim than No Country for Old Men, but not by all that Howard boys begin robmuch, this quiet thriller is among the year’s best. bing banks, something that’s new to Toby but not so new to Tanner. Hamilton, the obligatory “old lawman about to be forced into retirement,” isn’t in a hurry to catch the thieves; he’s content to set a bear trap, get some coffee and hang out with his partner, Alberto (Gil Birmingham), whom he lovingly teases with horribly politically incorrect, race-based prods. What follows isn’t your typical “cops and robbers” cat-and-mouse game, so much as it is two competing life philosophies working in opposition: The younger men rage against a system that’s done them wrong while an old man, who has served the system so long, realizes he’s nothing without it. Sheridan’s script is all patient profundity, deep meaning hidden in brief, mumbled conversations about the “sins of the father” versus “the responsibilities of a dad.” What’s not said is just as remarkable: A silent scene of the brothers playfully wrestling, silhouetted against a barbed-wire fence and field, is as poignant as any spoken dialogue. Pine is muted and smoldering; his restrained take may not be flashy but is just as critical as Foster’s wilder, showy turn as the family’s black sheep, trying to make good as best he knows how. Bridges is more Crazy Heart than R.I.P.D. here, all steely-eyed remorse and unspoken anguish. Hamilton may act tired and sleepy, but Bridges is clearly alert and awake in the role, dispatching the folksy “old-timer” routine in a brilliant sequence. What’s more, Hell or High Water is timely without being obnoxious about it. Graffiti about bank bailouts and a great speech on the evolution of American eviction by Alberto paint the outlaws’ actions as something other than simply “black and white.” It’s not quite gray, per se, as what the boys do is plainly, nakedly bad. It’s just bad for a reason. Not as nihilistic as No Country for Old Men, but endowed with the same gravity and slow-motion-car-crash esthetic, Hell or High Water is exceptional. The gap between summer and fall is often movie purgatory, with studios dumping dumpster fires into theaters when nobody’s looking. Hell doesn’t belong in that purgatory; it belongs among the year’s best. This review first appeared in The Reader of Omaha, Nebraska.