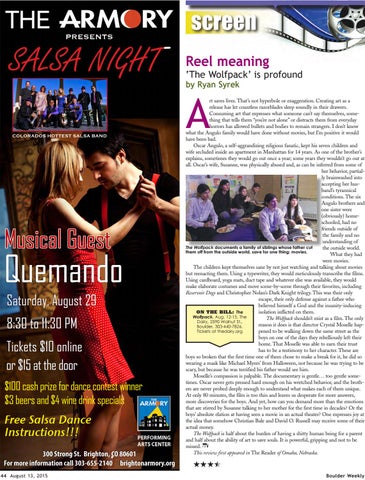 ‘The Wolfpack’ is profound  by Ryan Syrek

rt saves lives. That’s not hyperbole or exaggeration. Creating art as a release has let countless razorblades sleep soundly in their drawers. Consuming art that expresses what someone can’t say themselves, something that tells them “you’re not alone” or distracts them from everyday horrors has allowed bullets and bodies to remain strangers. I don’t know what the Angulo family would have done without movies, but I’m positive it would have been bad. Oscar Angulo, a self-aggrandizing religious fanatic, kept his seven children and wife secluded inside an apartment in Manhattan for 14 years. As one of the brother’s explains, sometimes they would go out once a year; some years they wouldn’t go out at all. Oscar’s wife, Susanne, was physically abused and, as can be inferred from some of her behavior, partially brainwashed into accepting her husband’s tyrannical conditions. The six Angulo brothers and one sister were (obviously) homeschooled, had no friends outside of the family and no understanding of The Wolfpack documents a family of siblings whose father cut the outside world. them off from the outside world, save for one thing: movies. What they had were movies. The children kept themselves sane by not just watching and talking about movies but reenacting them. Using a typewriter, they would meticulously transcribe the films. Using cardboard, yoga mats, duct tape and whatever else was available, they would make elaborate costumes and move scene-by-scene through their favorites, including Reservoir Dogs and Christopher Nolan’s Dark Knight trilogy. This was their only escape, their only defense against a father who believed himself a God and the insanity-inducing isolation inflicted on them. ON THE BILL: The Wolfpack. Aug. 12-15. The The Wolfpack shouldn’t exist as a film. The only Dairy, 2590 Walnut St., reason it does is that director Crystal Moselle hapBoulder, 303-440-7826. pened to be walking down the same street as the Tickets at thedairy.org boys on one of the days they rebelliously left their home. That Moselle was able to earn their trust has to be a testimony to her character. These are boys so broken that the first time one of them chose to make a break for it, he did so wearing a mask like Michael Myers’ from Halloween, not because he was trying to be scary, but because he was terrified his father would see him. Moselle’s compassion is palpable. The documentary is gentle… too gentle sometimes. Oscar never gets pressed hard enough on his wretched behavior, and the brothers are never probed deeply enough to understand what makes each of them unique. At only 80 minutes, the film is too thin and leaves us desperate for more answers, more discoveries for the boys. And yet, how can you demand more than the emotions that are stirred by Susanne talking to her mother for the first time in decades? Or the boys’ absolute elation at having seen a movie in an actual theater? One expresses joy at the idea that somehow Christian Bale and David O. Russell may receive some of their actual money. The Wolfpack is half about the burden of having a shitty human being for a parent and half about the ability of art to save souls. It is powerful, gripping and not to be missed. This review first appeared in The Reader of Omaha, Nebraska.