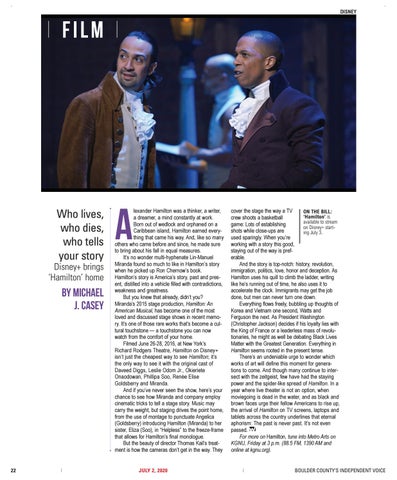 Who lives, who dies, who tells your story

lexander Hamilton was a thinker, a writer, a dreamer, a mind constantly at work. Born out of wedlock and orphaned on a Caribbean island, Hamilton earned everything that came his way. And, like so many others who came before and since, he made sure to bring about his fall in equal measures. It’s no wonder multi-hyphenate Lin-Manuel Miranda found so much to like in Hamilton’s story when he picked up Ron Chernow’s book. Hamilton’s story is America’s story, past and present, distilled into a vehicle filled with contradictions, weakness and greatness. But you knew that already, didn’t you? Miranda’s 2015 stage production, Hamilton: An American Musical, has become one of the most loved and discussed stage shows in recent memory. It’s one of those rare works that’s become a cultural touchstone — a touchstone you can now watch from the comfort of your home. Filmed June 26-28, 2016, at New York’s Richard Rodgers Theatre, Hamilton on Disney+ isn’t just the cheapest way to see Hamilton; it’s the only way to see it with the original cast of Daveed Diggs, Leslie Odom Jr., Okieriete Onaodowan, Phillipa Soo, Renée Elise Goldsberry and Miranda. And if you’ve never seen the show, here’s your chance to see how Miranda and company employ cinematic tricks to tell a stage story. Music may carry the weight, but staging drives the point home, from the use of montage to punctuate Angelica (Goldsberry) introducing Hamilton (Miranda) to her sister, Eliza (Soo), in “Helpless” to the freeze-frame that allows for Hamilton’s final monologue. But the beauty of director Thomas Kail’s treatment is how the cameras don’t get in the way. They JULY 2, 2020

cover the stage the way a TV ON THE BILL: ‘Hamilton’ is crew shoots a basketball available to stream game: Lots of establishing on Disney+ startshots while close-ups are ing July 3. used sparingly. When you’re working with a story this good, staying out of the way is preferable. And the story is top-notch: history, revolution, immigration, politics, love, honor and deception. As Hamilton uses his quill to climb the ladder, writing like he’s running out of time, he also uses it to accelerate the clock. Immigrants may get the job done, but men can never turn one down. Everything flows freely, bubbling up thoughts of Korea and Vietnam one second, Watts and Ferguson the next. As President Washington (Christopher Jackson) decides if his loyalty lies with the King of France or a leaderless mass of revolutionaries, he might as well be debating Black Lives Matter with the Greatest Generation. Everything in Hamilton seems rooted in the present tense. There’s an undeniable urge to wonder which works of art will define this moment for generations to come. And though many continue to intersect with the zeitgeist, few have had the staying power and the spider-like spread of Hamilton. In a year where live theater is not an option, when moviegoing is dead in the water, and as black and brown faces urge their fellow Americans to rise up, the arrival of Hamilton on TV screens, laptops and tablets across the country underlines that eternal aphorism: The past is never past. It’s not even passed. For more on Hamilton, tune into Metro Arts on KGNU, Friday at 3 p.m. (88.5 FM, 1390 AM and online at kgnu.org). I