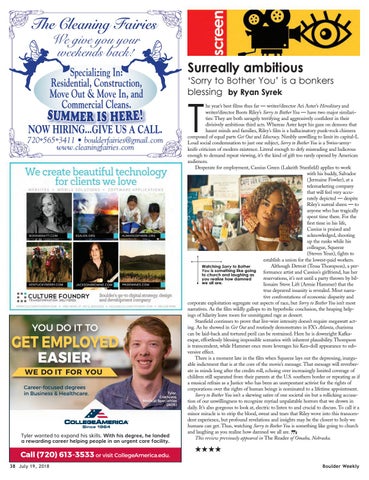 Specializing In: Residential, Construction, Move Out & Move In, and Commercial Cleans.

NOW HIRING...GIVE US A CALL.

YOU DO IT TO

Tyler wanted to expand his skills. With his degree, he landed a rewarding career helping people in an urgent care facility.

‘Sorry to Bother You’ is a bonkers blessing by Ryan Syrek

he year’s best films thus far — writer/director Ari Aster’s Hereditary and writer/director Boots Riley’s Sorry to Bother You — have two major similarities: They are both savagely terrifying and aggressively confident in their divisively ambitious third acts. Whereas Aster kept his gaze on demons that haunt minds and families, Riley’s film is a hallucinatory punk-rock chimera composed of equal parts Get Out and Idiocracy. Nimbly unwilling to limit its capital-L Loud social condemnation to just one subject, Sorry to Bother You is a Swiss-armyknife criticism of modern existence. Literal enough to defy misreading and ludicrous enough to demand repeat viewing, it’s the kind of gift too rarely opened by American audiences. Desperate for employment, Cassius Green (Lakeith Stanfield) applies to work with his buddy, Salvador ( Jermaine Fowler), at a telemarketing company that will feel very accurately depicted — despite Riley’s surreal sheen — to anyone who has tragically spent time there. For the first time in his life, Cassius is praised and acknowledged, shooting up the ranks while his colleague, Squeeze (Steven Yeun), fights to establish a union for the lowest-paid workers. Although Detroit (Tessa Thompson), a perWatching Sorry to Bother You is something like going formance artist and Cassius’s girlfriend, has her to church and laughing as reservations, it’s not until a party thrown by bilyou realize how damned we all are. lionaire Steve Lift (Armie Hammer) that the true depraved insanity is revealed. Most narrative confrontations of economic disparity and corporate exploitation segregate out aspects of race, but Sorry to Bother You isn’t most narratives. As the film wildly gallops to its hyperbolic conclusion, the heaping helpings of hilarity leave room for unmitigated rage as dessert. Stanfield continues to prove that live-wire intensity doesn’t require megawatt acting. As he showed in Get Out and routinely demonstrates in FX’s Atlanta, charisma can be laid-back and tortured peril can be restrained. Here he is downright Kafkaesque, effortlessly blessing impossible scenarios with inherent plausibility. Thompson is transcendent, while Hammer once more leverages his Ken-doll appearance to subversive effect. There is a moment late in the film when Squeeze lays out the depressing, inarguable indictment that is at the core of the movie’s message. That message will reverberate in minds long after the credits roll, echoing over increasingly limited coverage of children still separated from their parents at the U.S. southern border or repeating as if a musical refrain as a Justice who has been an unrepentant activist for the rights of corporations over the rights of human beings is nominated to a lifetime appointment. Sorry to Bother You isn’t a skewing satire of one societal sin but a rollicking accusation of our unwillingness to recognize myriad unpalatable horrors that we drown in daily. It’s also gorgeous to look at, electric to listen to and crucial to discuss. To call it a minor miracle is to strip the blood, sweat and tears that Riley wove into this transcendent experience, but profound revelations and insights may be the closest to holy we humans can get. Thus, watching Sorry to Bother You is something like going to church and laughing as you realize how damned we all are. This review previously appeared in The Reader of Omaha, Nebraska.