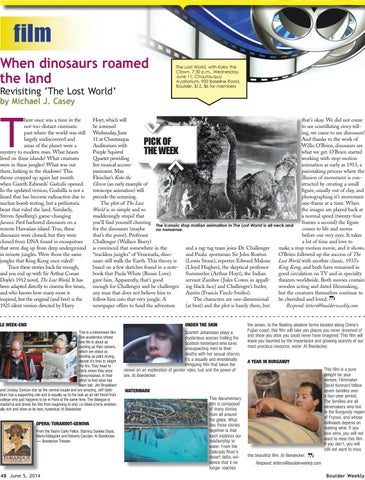 film When dinosaurs roamed the land Revisiting ‘The Lost World’

here once was a time in the not-too-distant cinematic past where the world was still largely undiscovered and areas of the planet were a mystery to modern man. What beasts lived on these islands? What creatures were in these jungles? What was out there, lurking in the shadows? This theme cropped up again last month when Gareth Edwards’ Godzilla opened. In the updated version, Godzilla is not a lizard that has become radioactive due to nuclear bomb testing, but a prehistoric beast that ruled the land. Similarly, Steven Spielberg’s game-changing Jurassic Park harbored dinosaurs on a remote Hawaiian island. True, these dinosaurs were cloned, but they were cloned from DNA found in mosquitoes that were dug up from deep underground in remote jungles. Were those the same jungles that King Kong once ruled? Trace these stories back far enough, and you end up with Sir Arthur Conan Doyle’s 1912 novel, The Lost World. It has been adapted directly to cinema five times, and who knows how many more it inspired, but the original (and best) is the 1925 silent version directed by Harry

Hoyt, which will that’s okay. We did not come be screened to see scintillating story tellWednesday, June ing, we came to see dinosaurs! 11 at Chautauqua And thanks to the work of Auditorium with Willis O’Brien, dinosaurs are Purple Squirrel what we get. O’Brien started Quartet providing working with stop-motion live musical accomanimation as early as 1913, a paniment. Max painstaking process where the Fleischer’s Koko the illusion of movement is conClown (an early example of structed by creating a small rotoscope animation) will figure, usually out of clay, and precede the screening. photographing it’s movement The plot of The Lost one-frame at a time. When World is so simple and so the images are played back at maddeningly stupid that a normal speed (twenty-four you’ll find yourself cheering frames a second) the figure The iconoic stop motion animation in The Lost World is all neck and for the dinosaurs (maybe comes to life and moves no nonsense. that’s the point). Professor before our very eyes. It takes Challenger (Wallace Beery) a lot of time and love to is convinced that somewhere in the and a rag-tag team joins Dr. Challenger make a stop-motion movie, and it shows. “trackless jungles” of Venezuela, dinoand Paula: sportsman Sir John Roxton O’Brien followed up the success of The saurs still walk the Earth. This theory is (Lewis Stone), reporter Edward Malone Lost World with another classic, 1933’s based on a few sketches found in a note- (Lloyd Hughes), the skeptical professor King Kong, and both have remained in book that Paula White (Bessie Love) Summerlee (Arthur Hoyt), the Indian good circulation on TV and in specialty gave him. Apparently, that’s good servant Zambor ( Jules Cowes in appalltheaters worldwide. Both movies contain enough for Challenger and he challenges ing black face) and Challenger’s butler, wooden acting and dated filmmaking, any man that does not believe him to Austin (Francis Finch-Smiles). but the creatures themselves continue to follow him into that very jungle. A The characters are one-dimensional be cherished and loved. newspaper offers to fund the adventure (at best) and the plot is barely there, but Respond: letters@boulderweekly.com

PICK OF THE WEEK

This is a bittersweet film. Two academics whose love life is about as exciting as their careers, which are about as exciting as paint drying, decide it’s time to relight the fire. They head to Paris where they once honeymooned, in their effort to find what has been lost. Jim Broadbent and Lindsay Duncan star as the central couple and are amazing. Jeff Goldblum has a supporting role and is equally up to the task as an old friend from college who just happens to be in Paris at the same time. The dialogue is masterful and drives the film from beginning to end. Le Week-End is emotionally rich and when at its best, hysterical. At Boedecker. ­

Scarlett Johansson plays a mysterious woman trolling the Scottish hinterland who lures unsuspecting men to their deaths with her sexual charms. It’s a visually and emotionally intriguing film that takes the viewer on an exploration of gender roles, lust and the power of sex. At Boedecker.

the ocean, to the floating abalone farms located along China’s Fujian coast, this film will take you places you never dreamed of and show you sites you could never have imagined. This film will leave you haunted by the importance and growing scarcity of our most precious resource, water. At Boedecker. A YEAR IN BURGANDY This film is a pure delight for your senses. Filmmaker David Kennard follow seven families over a four-year period. The families are all winemakers who live in the Burgundy region of France, and whose livlihoods depend on making wine. If you love wine, you will not want to miss this film. If you don’t, you will still not want to miss

WATERMARK This documentary film is composed of many stories from all around the globe. What ties these stories together is that each explores our relationship to water. From the Colorado River’s desert delta, evidence that it no longer reaches