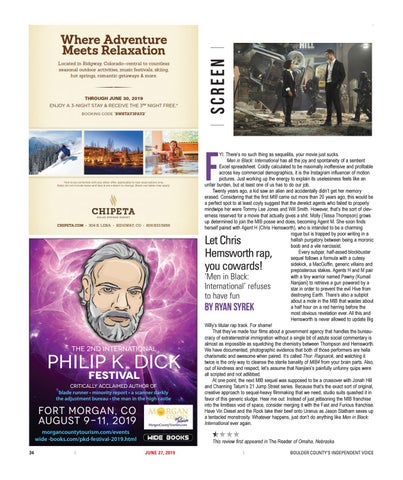 YI: There’s no such thing as sequelitis, your movie just sucks. Men in Black: International has all the joy and spontaneity of a sentient Excel spreadsheet. Coldly calculated to be maximally inoffensive and profitable across key commercial demographics, it is the Instagram influencer of motion pictures. Just working up the energy to explain its uselessness feels like an unfair burden, but at least one of us has to do our job. Twenty years ago, a kid saw an alien and accidentally didn’t get her memory erased. Considering that the first MIB came out more than 20 years ago, this would be a perfect spot to at least coyly suggest that the derelict agents who failed to properly mindwipe her were Tommy Lee Jones and Will Smith. However, that’s the sort of cleverness reserved for a movie that actually gives a shit. Molly (Tessa Thompson) grows up determined to join the MIB posse and does, becoming Agent M. She soon finds herself paired with Agent H (Chris Hemsworth), who is intended to be a charming rogue but is trapped by poor writing in a hellish purgatory between being a moronic boob and a vile narcissist. Every subpar, half-assed blockbuster sequel follows a formula with a cutesy sidekick, a MacGuffin, generic villains and preposterous stakes. Agents H and M pair with a tiny warrior named Pawny (Kumail Nanjiani) to retrieve a gun powered by a star in order to prevent the evil Hive from destroying Earth. There’s also a subplot about a mole in the MIB that wastes about a half hour on a red herring before the most obvious revelation ever. All this and Hemsworth is never allowed to update Big Willy’s titular rap track. For shame! That they’ve made four films about a government agency that handles the bureaucracy of extraterrestrial immigration without a single bit of astute social commentary is almost as impossible as squelching the chemistry between Thompson and Hemsworth. We have documented, photographic evidence that both of those performers are hella charismatic and awesome when paired. It’s called Thor: Ragnarok, and watching it twice is the only way to cleanse the sterile banality of MIB4 from your brain parts. Also, out of kindness and respect, let’s assume that Nanjiani’s painfully unfunny quips were all scripted and not adlibbed. At one point, the next MIB sequel was supposed to be a crossover with Jonah Hill and Channing Tatum’s 21 Jump Street series. Because that’s the exact sort of original, creative approach to sequel-heavy filmmaking that we need, studio suits quashed it in favor of this generic sludge. Hear me out: Instead of just jettisoning the MIB franchise into the limitless void of space, consider merging it with the Fast and Furious franchise. Have Vin Diesel and the Rock take their beef onto Uranus as Jason Statham sexes up a tentacled monstrosity. Whatever happens, just don’t do anything like Men in Black: International ever again.

This review first appeared in The Reader of Omaha, Nebraska. JUNE 27, 2019