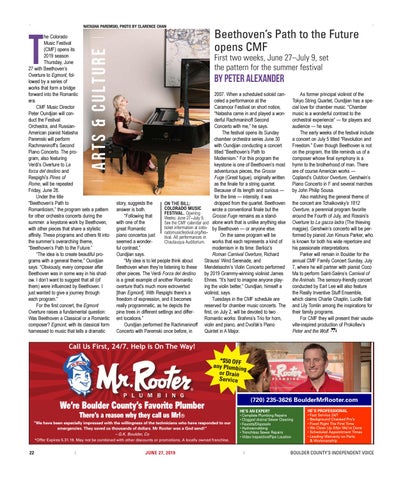 he Colorado Music Festival (CMF) opens its 2019 season Thursday, June 27 with Beethoven’s Overture to Egmont, followed by a series of works that form a bridge forward into the Romantic era. CMF Music Director Peter Oundjian will conduct the Festival Orchestra, and RussianAmerican pianist Natasha Paremski will perform Rachmaninoff’s Second Piano Concerto. The program, also featuring Verdi’s Overture to La forza del destino and Respighi’s Pines of Rome, will be repeated Friday, June 28. Under the title “Beethoven’s Path to Romanticism,” the program sets a pattern for other orchestra concerts during the summer: a keystone work by Beethoven, with other pieces that share a stylistic affinity. These programs and others fit into the summer’s overarching theme, “Beethoven’s Path to the Future.” “The idea is to create beautiful programs with a general theme,” Oundjian says. “Obviously, every composer after Beethoven was in some way in his shadow. I don’t want to suggest that all (of them) were influenced by Beethoven. I just wanted to give a journey through each program.” For the first concert, the Egmont Overture raises a fundamental question: Was Beethoven a Classical or a Romantic composer? Egmont, with its classical form harnessed to music that tells a dramatic

by Peter Alexander 2007. When a scheduled soloist canceled a performance at the Caramoor Festival on short notice, “Natasha came in and played a wonderful Rachmaninoff Second Concerto with me,” he says. The festival opens its Sunday chamber orchestra series June 30 with Oundjian conducting a concert titled “Beethoven’s Path to Modernism.” For this program the keystone is one of Beethoven’s most adventurous pieces, the Grosse Fuge (Great fugue), originally written as the finale for a string quartet. Because of its length and curious — for the time — intensity, it was story, suggests the dropped from the quartet. Beethoven ON THE BILL: COLORADO MUSIC answer is both. wrote a conventional finale but the FESTIVAL. Opening “Following that Grosse Fuge remains as a standWeeks: June 27–July 9. with one of the See the CMF calendar and alone work that is unlike anything else ticket information at colo- by Beethoven — or anyone else. great Romantic radomusicfestival.org/fespiano concertos just On the same program will be tival. All performances in seemed a wonderChautauqua Auditorium. works that each represents a kind of ful contrast,” modernism in its time: Berlioz’s Oundjian says. Roman Carnival Overture, Richard “My idea is to let people think about Strauss’ Wind Serenade, and Beethoven when they’re listening to these Mendelssohn’s Violin Concerto performed other pieces. The Verdi Forza del destino by 2019 Grammy-winning violinist James is a great example of another Romantic Ehnes. “It’s hard to imagine anyone playoverture that’s much more extroverted ing the violin better,” Oundjian, himself a [than Egmont]. With Respighi there’s a violinist, says. freedom of expression, and it becomes Tuesdays in the CMF schedule are really programmatic, as he depicts the reserved for chamber music concerts. The pine trees in different settings and differfirst, on July 2, will be devoted to two ent locations.” Romantic works: Brahms’s Trio for horn, Oundjian performed the Rachmaninoff violin and piano, and Dvořák’s Piano Quintet in A Major. Concerto with Paremski once before, in

As former principal violinist of the Tokyo String Quartet, Oundjian has a special love for chamber music. “Chamber music is a wonderful contrast to the orchestral experience” — for players and audience — he says. The early weeks of the festival include a concert on July 5 titled “Revolution and Freedom.” Even though Beethoven is not on the program, the title reminds us of a composer whose final symphony is a hymn to the brotherhood of man. There are of course American works — Copland’s Outdoor Overture, Gershwin’s Piano Concerto in F and several marches by John Philip Sousa. Also matching the general theme of the concert are Tchaikovsky’s 1812 Overture, a perennial program favorite around the Fourth of July, and Rossini’s Overture to La gazza ladra (The thieving magpie). Gershwin’s concerto will be performed by pianist Jon Kimura Parker, who is known for both his wide repertoire and his passionate interpretations. Parker will remain in Boulder for the annual CMF Family Concert Sunday, July 7, where he will partner with pianist Coco Ma to perform Saint-Saëns’s Carnival of the Animals. The sensory-friendly concert conducted by Earl Lee will also feature the Really Inventive Stuff Ensemble, which claims Charlie Chaplin, Lucille Ball and Lily Tomlin among the inspirations for their family programs. For CMF they will present their vaudeville-inspired production of Prokofiev’s Peter and the Wolf.

We’re Boulder County’s Favorite Plumber There’s a reason why they call us Mr!®

“We have been especially impressed with the willingness of the technicians who have responded to our emergencies. They saved us thousands of dollars. Mr Rooter was a God send!” – G.K. Boulder, Co *Offer Expires 5.31.19. May not be combined with other discounts or promotions. A locally owned franchise.