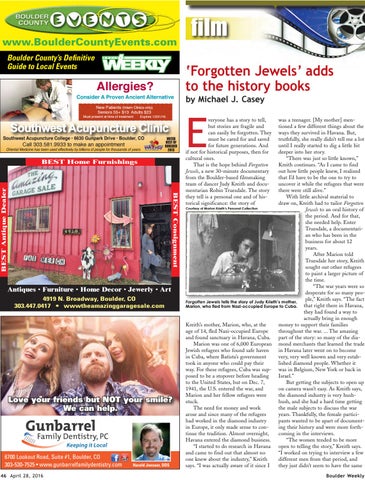 Must present at time of treatment

Oriental Medicine has been used effectively by billions of people for thousands of years.

Love your friends but NOT your smile? We can help.

veryone has a story to tell, but stories are fragile and can easily be forgotten. They must be cared for and saved for future generations. And if not for historical purposes, then for cultural ones. That is the hope behind Forgotten Jewels, a new 30-minute documentary from the Boulder-based filmmaking team of dancer Judy Kreith and documentarian Robin Truesdale. The story they tell is a personal one and of historical significance: the story of

was a teenager. [My mother] mentioned a few different things about the ways they survived in Havana. But, truthfully, she really didn’t tell me a lot until I really started to dig a little bit deeper into her story. “There was just so little known,” Kreith continues. “As I came to find out how little people knew, I realized that I’d have to be the one to try to uncover it while the refugees that were there were still alive.” With little archival material to draw on, Kreith had to tailor Forgotten Courtesy of Marion Krieth’s Personal Collection Jewels to an oral history of the period. And for that, she needed help. Enter Truesdale, a documentarian who has been in the business for about 12 years. After Marion told Truesdale her story, Kreith sought out other refugees to paint a larger picture of the time. “The war years were so desperate for so many people,” Kreith says. “The fact Forgotten Jewels tells the story of Judy Krieth’s mother, Marion, who fled from Nazi-occupied Europe to Cuba. that right there in Havana, they had found a way to actually bring in enough Kreith’s mother, Marion, who, at the money to support their families age of 14, fled Nazi-occupied Europe throughout the war. ... The amazing and found sanctuary in Havana, Cuba. part of the story: so many of the diaMarion was one of 6,000 European mond merchants that learned the trade Jewish refugees who found safe haven in Havana later went on to become in Cuba, where Batista’s government very, very well known and very estabtook in anyone who could pay their lished diamond people. Whether it way. For these refugees, Cuba was sup- was in Belgium, New York or back in posed to be a stopover before heading Israel.” to the United States, but on Dec. 7, But getting the subjects to open up 1941, the U.S. entered the war, and on camera wasn’t easy. As Kreith says, Marion and her fellow refugees were the diamond industry is very hushstuck. hush, and she had a hard time getting The need for money and work the male subjects to discuss the war arose and since many of the refugees years. Thankfully, the female particihad worked in the diamond industry pants wanted to be apart of documentin Europe, it only made sense to coning their history and were more forthtinue the tradition. Almost overnight, coming in the interviews. Havana entered the diamond business. “The women tended to be more “I started to do research in Havana open to telling the story,” Kreith says. and came to find out that almost no “I worked on trying to interview a few one knew about the industry,” Kreith different men from that period, and says. “I was actually aware of it since I they just didn’t seem to have the same Boulder Weekly