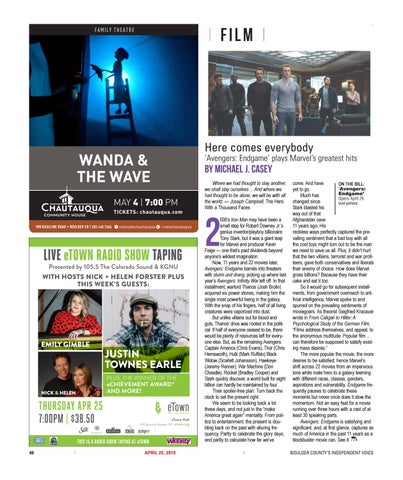 WITH HOSTS NICK + HELEN FORSTER PLUS THIS WEEK’S GUESTS:

JUSTIN TOWNES EARLE PLUS, THE WINNER OF THE

008’s Iron Man may have been a small step for Robert Downey Jr.’s genius inventor/playboy billionaire Tony Stark, but it was a giant leap for Marvel and producer Kevin Feige — one that’s paid dividends beyond anyone’s wildest imagination. Now, 11 years and 22 movies later, Avengers: Endgame barrels into theaters with sturm und drang, picking up where last year’s Avengers: Infinity War left off. In that installment, warlord Thanos (Josh Brolin) acquired six power stones, making him the single most powerful being in the galaxy. With the snap of his fingers, half of all living creatures were vaporized into dust. But unlike villains out for blood and guts, Thanos’ drive was rooted in the political: If half of everyone ceased to be, there would be plenty of resources left for everyone else. But, as the remaining Avengers: Captain America (Chris Evans), Thor (Chris Hemsworth), Hulk (Mark Ruffalo) Black Widow (Scarlett Johansson), Hawkeye (Jeremy Renner), War Machine (Don Cheadle), Rocket (Bradley Cooper) and Stark quickly discover, a world built for eight billion can hardly be maintained by four. Their spoiler-free plan: Turn back the clock to set the present right. We seem to be looking back a lot these days, and not just in the “make America great again” mentality. From politics to entertainment, the present is doubling back on the past with alluring frequency. Partly to celebrate the glory days, and partly to calculate how far we’ve I

come. And have ON THE BILL: ‘Avengers: yet to go. Endgame’ Much has Opens April 26 changed since everywhere. Stark blasted his way out of that Afghanistan cave 11 years ago. His reckless ways perfectly captured the prevailing sentiment that a bad boy with all the cool toys might turn out to be the man we need to save us all. Plus, it didn’t hurt that the two villains, terrorist and war profiteers, gave both conservatives and liberals their enemy of choice. How does Marvel gross billions? Because they have their cake and eat it too. So it would go for subsequent installments, from government overreach to artificial intelligence, Marvel spoke to and spurred on the prevailing sentiments of moviegoers. As theorist Siegfried Kracauer wrote in From Caligari to Hitler: A Psychological Study of the German Film, “Films address themselves, and appeal, to the anonymous multitude. Popular film ... can therefore be supposed to satisfy existing mass desires.” The more popular the movie, the more desires to be satisfied; hence Marvel’s shift across 22 movies from an impervious lone white male hero to a galaxy teeming with different races, classes, genders, aspirations and vulnerability. Endgame frequently pauses to celebrate these moments but never once does it slow the momentum. Not an easy feat for a movie running over three hours with a cast of at least 30 speaking parts. Avengers: Endgame is satisfying and significant, and, at first glance, captures as much of America in the past 11 years as a blockbuster movie can. See it. BOULDER COUNTY’S INDEPENDENT VOICE