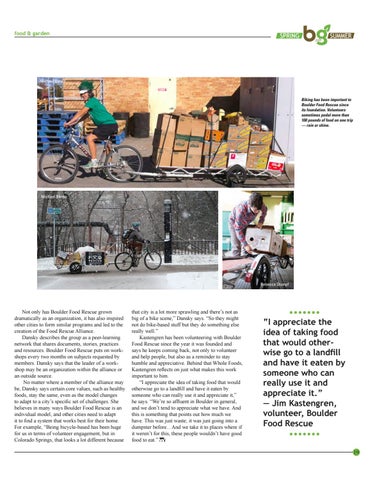 Biking has been important to Boulder Food Rescue since its foundation. Volunteers sometimes pedal more than 100 pounds of food on one trip — rain or shine.

Not only has Boulder Food Rescue grown dramatically as an organization, it has also inspired other cities to form similar programs and led to the creation of the Food Rescue Alliance. Dansky describes the group as a peer-learning network that shares documents, stories, practices and resources. Boulder Food Rescue puts on workshops every two months on subjects requested by members. Dansky says that the leader of a workshop may be an organization within the alliance or an outside source. No matter where a member of the alliance may be, Dansky says certain core values, such as healthy foods, stay the same, even as the model changes to adapt to a city’s specific set of challenges. She believes in many ways Boulder Food Rescue is an individual model, and other cities need to adapt it to find a system that works best for their home. For example, “Being bicycle-based has been huge for us in terms of volunteer engagement, but in Colorado Springs, that looks a lot different because

that city is a lot more sprawling and there’s not as big of a bike scene,” Dansky says. “So they might not do bike-based stuff but they do something else really well.” Kastengren has been volunteering with Boulder Food Rescue since the year it was founded and says he keeps coming back, not only to volunteer and help people, but also as a reminder to stay humble and appreciative. Behind that Whole Foods, Kastengren reflects on just what makes this work important to him. “I appreciate the idea of taking food that would otherwise go to a landfill and have it eaten by someone who can really use it and appreciate it,” he says. “We’re so affluent in Boulder in general, and we don’t tend to appreciate what we have. And this is something that points out how much we have. This was just waste; it was just going into a dumpster before... And we take it to places where if it weren’t for this, these people wouldn’t have good food to eat.”

••••••• “I appreciate the idea of taking food that would otherwise go to a landfill and have it eaten by someone who can really use it and appreciate it.” — Jim Kastengren, volunteer, Boulder Food Rescue ••••••• 19