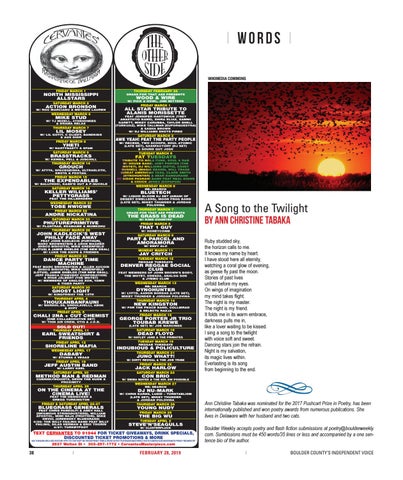 Grass For that ass preseNts

all star triBute to alaNis Morissette

Grass For that ass preseNts

the Grass is dead Friday March 8

Max 15 Msg/Mo. Msg & data rates May apply text stop to opt out for our privacy terMs & service go to http://cervantesMasterpiece.ticketfly.coM/files/2014/03/cervantes-privacy-docuMent.pdf

Ruby studded sky, the horizon calls to me. It knows my name by heart. I have stood here all eternity, watching a coral glow of evening, as geese fly past the moon. Stories of past lives unfold before my eyes. On wings of imagination my mind takes flight. The night is my master. The night is my friend. It folds me in its warm embrace, darkness pulls me in, like a lover waiting to be kissed. I sing a song to the twilight with voice soft and sweet. Dancing stars join the refrain. Night is my salvation, its magic lives within. Everlasting is its song from beginning to the end.

A Song to the Twilight

Ann Christine Tabaka was nominated for the 2017 Pushcart Prize in Poetry, has been internationally published and won poetry awards from numerous publications. She lives in Delaware with her husband and two cats. Boulder Weekly accepts poetry and flash fiction submissions at poetry@boulderweekly. com. Sumbissions must be 450 words/35 lines or less and accompanied by a one sentence bio of the author. I