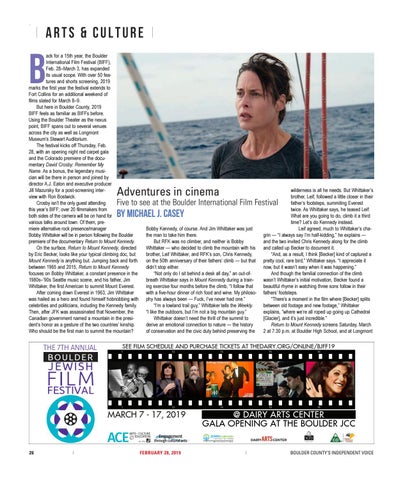 ack for a 15th year, the Boulder International Film Festival (BIFF), Feb. 28–March 3, has expanded its usual scope. With over 50 features and shorts screening, 2019 marks the first year the festival extends to Fort Collins for an additional weekend of films slated for March 8–9. But here in Boulder County, 2019 BIFF feels as familiar as BIFFs before. Using the Boulder Theater as the nexus point, BIFF spans out to several venues across the city as well as Longmont Museum’s Stewart Auditorium. The festival kicks off Thursday, Feb. 28, with an opening night red carpet gala and the Colorado premiere of the documentary David Crosby: Remember My Name. As a bonus, the legendary musician will be there in person and joined by director A.J. Eaton and executive producer Jill Mazursky for a post-screening interview with Ron Bostwick. Crosby isn’t the only guest attending this year’s BIFF; over 20 filmmakers from both sides of the camera will be on hand for various talks around town. Of them, premiere alternative rock presence/manager Bobby Whittaker will be in person following the Boulder premiere of the documentary Return to Mount Kennedy. On the surface, Return to Mount Kennedy, directed by Eric Becker, looks like your typical climbing doc, but Mount Kennedy is anything but. Jumping back and forth between 1965 and 2015, Return to Mount Kennedy focuses on Bobby Whittaker, a constant presence in the 1980s–’90s Seattle music scene, and his father, Jim Whittaker, the first American to summit Mount Everest. After coming down Everest in 1963, Jim Whittaker was hailed as a hero and found himself hobnobbing with celebrities and politicians, including the Kennedy family. Then, after JFK was assassinated that November, the Canadian government named a mountain in the president’s honor as a gesture of the two countries’ kinship. Who should be the first man to summit the mountain?

wilderness is all he needs. But Whittaker’s brother, Leif, followed a little closer in their father’s footsteps, summiting Everest twice. As Whittaker says, he teased Leif: What are you going to do, climb it a third time? Let’s do Kennedy instead. Leif agreed, much to Whittaker’s chagrin — “I always say I’m half-kidding,” he explains — and the two invited Chris Kennedy along for the climb and called up Becker to document it. “And, as a result, I think [Becker] kind of captured a pretty cool, rare bird,” Whittaker says. “I appreciate it now, but it wasn’t easy when it was happening.” And though the familial connection of the climb wasn’t Whittaker’s initial motivation, Becker found a beautiful rhyme in watching three sons follow in their fathers’ footsteps. “There’s a moment in the film where [Becker] splits between old footage and new footage,” Whittaker explains, “where we’re all roped up going up Cathedral [Glacier], and it’s just incredible.” Return to Mount Kennedy screens Saturday, March 2 at 7:30 p.m. at Boulder High School, and at Longmont

Five to see at the Boulder International Film Festival

Bobby Kennedy, of course. And Jim Whittaker was just the man to take him there. But RFK was no climber, and neither is Bobby Whittaker — who decided to climb the mountain with his brother, Leif Whittaker, and RFK’s son, Chris Kennedy, on the 50th anniversary of their fathers’ climb — but that didn’t stop either. “Not only do I sit behind a desk all day,” an out-ofbreath Whittaker says in Mount Kennedy during a training exercise four months before the climb, “I follow that with a five-hour dinner of rich food and wine. My philosophy has always been — Fuck, I’ve never had one.” “I’m a lowland trail guy,” Whittaker tells the Weekly. “I like the outdoors, but I’m not a big mountain guy.” Whittaker doesn’t need the thrill of the summit to derive an emotional connection to nature — the history of conservation and the civic duty behind preserving the