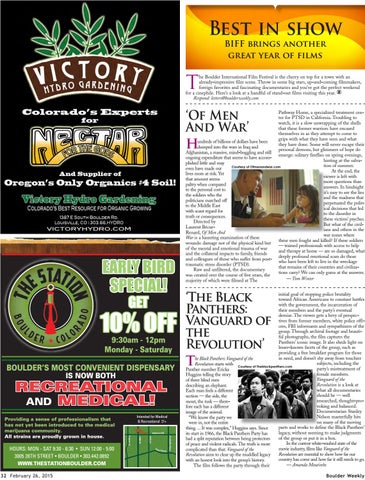 Best in show BIFF brings another great year of films

he Boulder International Film Festival is the cherry on top for a town with an already-impressive film scene. Throw in some big stars, up-and-coming filmmakers, foreign favorites and fascinating documentaries and you’ve got the perfect weekend for a cinephile. Here’s a look at a handful of stand-out films visiting this year. Respond: letters@boulderweekly.com

BOULDER’S MOST CONVENIENT DISPENSARY IS NOW BOTH

RECREATIONAL AND MEDICAL! Providing a sense of professionalism that has not yet been introduced to the medical marijuana community. All strains are proudly grown in house.

Pathway Home, a specialized treatment center for PTSD in California. Troubling to watch, it is a slow unwrapping of the shells that these former warriors have encased themselves in as they attempt to come to grips with what they have seen and what undreds of billions of dollars have been they have done. Some will never escape their dumped into the wars in Iraq and personal demons, but glimmers of hope do Afghanistan, a massive, mind-boggling and still emerge: solitary fireflies on spring evenings, ongoing expenditure that seems to have accomhinting at the salvaplished little and may tion of summer. Courtesy of Ofmenandwar.com even have made our At the end, the lives more at risk. Yet viewer is left with that amount seems more questions than paltry when compared answers. In hindsight to the personal cost to it’s easy to see the lies the soldiers who the and the madness that politicians marched off perpetuated the politto the Middle East ical decisions that led with scant regard for to the disorder in truth or consequences. these victims’ psyches. Directed by But what of the civilLaurent Bécueians and others in the Renard, Of Men And war zones where War is a haunting examination of these these men fought and killed? If these soldiers wounds: damage not of the physical kind but — trained professionals with access to help of the mental and emotional trauma of war and therapy at home — are so damaged, what and the collateral impacts to family, friends deeply profound emotional scars do those and colleagues of those who suffer from postwho have been left to live in the wreckage traumatic stress disorder (PTSD). that remains of their countries and civilizaRaw and unfiltered, the documentary tions carry? We can only guess at the answers. was created over the course of five years, the — Tom Winter majority of which were filmed at The

‘The Black Panthers: Vanguard of the Revolution’ T

initial goal of stopping police brutality toward African Americans to constant battles with the government, the incarceration of their members and the party’s eventual demise. The viewer gets a bevy of perspectives from former members, white police officers, FBI informants and sympathizers of the group. Through archival footage and beautiful photographs, the film captures the Panthers’ iconic image. It also sheds light on lesser-known facets of the group, such as providing a free breakfast program for those in need, and doesn’t shy away from touchier he Black Panthers: Vanguard of the subjects, including the Revolution starts with Courtesy of Theblackpanthers.com party’s mistreatment of Panther member Ericka female members. Huggins telling the story Vanguard of the of three blind men Revolution is a look at describing an elephant. what all documentaries Each man feels a different should be — well section — the side, the researched, thought-prosnout, the tusk — therevoking and balanced. fore each has a different Documentarian Stanley image of the animal. Nelson masterfully hits “We know the party we on many of the moving were in, not the entire parts and works to define the Black Panthers’ thing. ... It was complex,” Huggins says. Since legacy, without seeming to make judgments its start in 1966, the Black Panthers Party has of the group or put it in a box. had a split reputation between being protectors In the current white-washed state of the of peace and violent radicals. The truth is more movie industry, films like Vanguard of the complicated than that. Vanguard of the Revolution are essential to show how far our Revolution aims to clear up the muddled legacy country has come and how far it still needs to go. with an honest look into the group’s history. — Amanda Moutinho The film follows the party through their Boulder Weekly