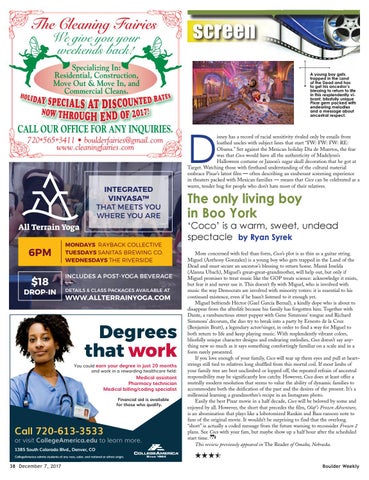 Specializing In: Residential, Construction, Move Out &amp; Move In, and Commercial Cleans.

INTEGRATED VINYASA™ THAT MEETS YOU WHERE YOU ARE

You could earn your degree in just 20 months and work in a rewarding healthcare field:

A young boy gets trapped in the Land of the Dead and has to get his ancestor’s blessing to return to life in this resplendently vibrant, blissfully unique Pixar gem packed with endearing melodies and a message about ancestral respect.

isney has a record of racial sensitivity rivaled only by emails from loathed uncles with subject lines that start “FW: FW: FW: RE: Obama.” Set against the Mexican holiday Día de Muertos, the fear was that Coco would have all the authenticity of Madelynn’s Halloween costume or Jaxson’s sugar skull decoration that he got at Target. Watching those with firsthand understanding of the cultural material embrace Pixar’s latest film — often describing an exuberant screening experience in theaters packed with Mexican families — means that Coco can be celebrated as a warm, tender hug for people who don’t hate most of their relatives.

The only living boy in Boo York

‘Coco’ is a warm, sweet, undead spectacle by Ryan Syrek More concerned with feel than form, Coco’s plot is as thin as a guitar string. Miguel (Anthony Gonzalez) is a young boy who gets trapped in the Land of the Dead and must secure an ancestor’s blessing to return home. Mamá Imelda (Alanna Ubach), Miguel’s great-great-grandmother, will help out, but only if Miguel promises to treat music like the GOP treats science: acknowledge it exists, but fear it and never use it. This doesn’t fly with Miguel, who is involved with music the way Democrats are involved with minority voters: it is essential to his continued existence, even if he hasn’t listened to it enough yet. Miguel befriends Héctor (Gael García Bernal), a kindly dope who is about to disappear from the afterlife because his family has forgotten him. Together with Dante, a rambunctious street pupper with Gene Simmons’ tongue and Richard Simmons’ decorum, the duo try to break into a party by Ernesto de la Cruz (Benjamin Bratt), a legendary actor/singer, in order to find a way for Miguel to both return to life and keep playing music. With resplendently vibrant colors, blissfully unique character designs and endearing melodies, Coco doesn’t say anything new so much as it says something comfortingly familiar on a scale and in a form rarely presented. If you love enough of your family, Coco will tear up them eyes and pull at heartstrings still tied to relatives long shuffled from this mortal coil. If most limbs of your family tree are best unclimbed or lopped off, the repeated refrain of ancestral responsibility may be significantly less catchy. However, Coco does at least offer a mutedly modern resolution that seems to value the ability of dynamic families to accommodate both the deification of the past and the desires of the present. It’s a millennial learning a grandmother’s recipe in an Instagram photo. Easily the best Pixar movie in a half decade, Coco will be beloved by some and enjoyed by all. However, the short that precedes the film, Olaf ’s Frozen Adventure, is an abomination that plays like a lobotomized Rankin and Bass ransom note to fans of the original movie. It wouldn’t be surprising to find that the overlong “short” is actually a coded message from the future warning to reconsider Frozen 2 plans. See Coco with your fam, but maybe show up a half hour after the scheduled start time. This review previously appeared in The Reader of Omaha, Nebraska.

CollegeAmerica admits students of any race, color, and national or ethnic origin.