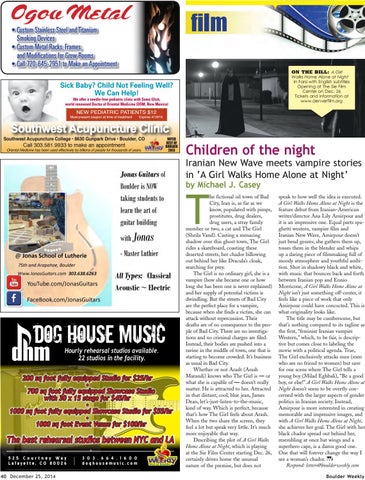 ON THE BILL: A Girl Walks Home Alone at Night In Farsi with English subtitles Opening at The Sie Film Center on Dec. 26 Tickets and information at www.denverfilm.org

Must present coupon at time of treatment

Oriental Medicine has been used effectively by billions of people for thousands of years.

in ‘A Girl Walks Home Alone at Night’

r Rocker Camp for KidsRock Out With A Friend

The best rehearsal studios between NYC and LA , 08

speak to how well the idea is executed. A Girl Walks Home Alone at Night is the feature debut from Iranian-American writer/director Ana Lily Amirpour and it is an impressive one. Equal parts spaghetti western, vampire film and Iranian New Wave, Amirpour doesn’t just bend genres; she gathers them up, tosses them in the blender and whips up a daring piece of filmmaking full of moody atmosphere and youthful ambition. Shot in shadowy black and white, with music that bounces back and forth between Iranian pop and Ennio Morricone, A Girl Walks Home Alone at Night isn’t just something off-center, it feels like a piece of work that only Amirpour could have concocted. This is what originality looks like. The title may be cumbersome, but that’s nothing compared to its tagline as the first, “feminist Iranian vampire Western,” which, to be fair, is descriptive but comes close to labeling the movie with a political agenda. True, The Girl exclusively attacks men (men who are no friend to women) but save for one scene where The Girl tells a young boy (Milad Eghbali), “Be a good boy, or else!” A Girl Walks Home Alone at Night doesn’t seem to be overtly concerned with the larger aspects of gender politics in Iranian society. Instead, Amirpour is more interested in creating memorable and impressive images, and with A Girl Walks Home Alone at Night, she achieves her goal. The Girl with her black chador spread out behind her, resembling at once bat wings and a superhero cape, is a damn good one. One that will forever change the way I see a woman’s chador. Respond: letters@boulderweekly.com Boulder Weekly