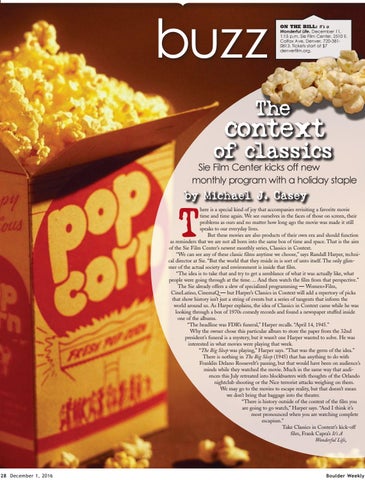 here is a special kind of joy that accompanies revisiting a favorite movie time and time again. We see ourselves in the faces of those on screen, their problems as ours and no matter how long ago the movie was made it still speaks to our everyday lives. But these movies are also products of their own era and should function as reminders that we are not all born into the same box of time and space. That is the aim of the Sie Film Center’s newest monthly series, Classics in Context. “We can see any of these classic films anytime we choose,” says Randall Harper, technical director at Sie. “But the world that they reside in is sort of unto itself. The only glimmer of the actual society and environment is inside that film. “The idea is to take that and try to get a semblance of what it was actually like, what people were going through at the time. ... And then watch the film from that perspective.” The Sie already offers a slew of specialized programming — Women+Film, CineLatino, CinemaQ — but Harper’s Classics in Context will add a repertory of picks that show history isn’t just a string of events but a series of tangents that inform the world around us. As Harper explains, the idea of Classics in Context came while he was looking through a box of 1970s comedy records and found a newspaper stuffed inside one of the albums. “The headline was FDR’s funeral,” Harper recalls. “April 14, 1945.” Why the owner chose this particular album to store the paper from the 32nd president’s funeral is a mystery, but it wasn’t one Harper wanted to solve. He was interested in what movies were playing that week. “The Big Sleep was playing,” Harper says. “That was the germ of the idea.” There is nothing in The Big Sleep (1945) that has anything to do with Franklin Delano Roosevelt’s passing, but that would have been on audience’s minds while they watched the movie. Much in the same way that audiences this July retreated into blockbusters with thoughts of the Orlando nightclub shooting or the Nice terrorist attacks weighing on them. We may go to the movies to escape reality, but that doesn’t mean we don’t bring that baggage into the theater. “There is history outside of the context of the film you are going to go watch,” Harper says. “And I think it’s most pronounced when you are watching complete escapism.” Take Classics in Context’s kick-off film, Frank Capra’s It’s A Wonderful Life,