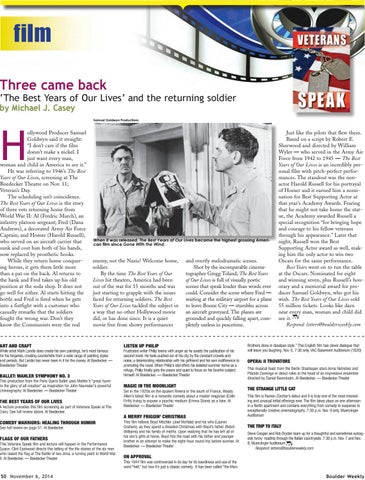 ‘The Best Years of Our Lives’ and the returning soldier

ollywood Producer Samuel Goldwyn said it straight: “I don’t care if the film doesn’t make a nickel. I just want every man, woman and child in America to see it.” He was referring to 1946’s The Best Years of Our Lives, screening at The Boedecker Theatre on Nov. 11; Veteran’s Day. The scheduling isn’t coincidence. The Best Years of Our Lives is the story of three vets returning home from World War II: Al (Fredric March), an infantry platoon sergeant; Fred (Dana Andrews), a decorated Army Air Force Captain; and Homer (Harold Russell), who served on an aircraft carrier that sunk and cost him both of his hands, now replaced by prosthetic hooks. While they return home conquering heroes, it gets them little more than a pat on the back. Al returns to the bank and Fred takes up his old position at the soda shop. It does not go well for either. Al starts hitting the bottle and Fred is fired when he gets into a fistfight with a customer who casually remarks that the soldiers fought the wrong war. Don’t they know the Communists were the real

When it was released, The Best Years of Our Lives became the highest grossing American film since Gone With the Wind.

enemy, not the Nazis? Welcome home, soldier. By the time The Best Years of Our Lives hit theaters, America had been out of the war for 15 months and was just starting to grapple with the issues faced for returning soldiers. The Best Years of Our Lives tackled the subject in a way that no other Hollywood movie did, or has done since. It is a quiet movie free from showy performances

While artist Mark Landis does create his own paintings, he’s most famous for his forgeries, creating counterfeits from a wide range of painting styles and periods. But Landis has never been in it for the money. At Boedecker. — Boedecker Theater

This production from the Paris Opera Ballet uses Mahler’s “great hymn to the glory of all creation” as inspiration for John Neumeier’s powerful choreography. At Boedecker. — Boedecker Theater

THE BEST YEARS OF OUR LIVES

A lecture precedes this film screening as part of Veterans Speak at The Dairy. See full review above. At Boedecker.

FLAGS OF OUR FATHERS

This Veterans Speak film and lecture will happen in the Performance Space. Clint Eastwood directs this telling of the life stories of the six men who raised the flag at The Battle of Iwo Jima, a turning point in World War II. At Boedecker. — Boedecker Theater

and overtly melodramatic scenes. Shot by the incomparable cinematographer Gregg Toland, The Best Years of Our Lives is full of visually poetic scenes that speak louder than words ever could. Consider the scene where Fred — waiting at the military airport for a plane to leave Boone City — stumbles across an aircraft graveyard. The planes are grounded and quickly falling apart, completely useless in peacetime.

Frustrated writer Philip teems with anger as he awaits the publication of his second novel. He feels pushed out of his city by the constant crowds and noise, a deteriorating relationship with his girlfriend and his own indifference to promoting the novel. When Philip’s idol offers his isolated summer home as a refuge, Philip finally gets the peace and quiet to focus on his favorite subject: himself. At Boedecker. — Boedecker Theater

MAGIC IN THE MOONLIGHT

Set in the 1920s on the opulent Riviera in the south of France, Woody Allen’s latest film is a romantic comedy about a master magician (Colin Firth) trying to expose a psychic medium (Emma Stone) as a fake. At Boedecker. — Boedecker Theater

This film follows Boyd Mitchler (Joel McHale) and his wife (Lauren Graham), as they spend a dreaded Christmas with Boyd’s father (Robin Williams) and his family of misfits. Upon realizing that he has left all of his son’s gifts at home, Boyd hits the road with his father and younger brother in an attempt to make the eight-­hour round trip before sunrise. At Boedecker. — Boedecker Theater

Just like the pilots that flew them. Based on a script by Robert E. Sherwood and directed by William Wyler — who served in the Army Air Force from 1942 to 1945 — The Best Years of Our Lives is an incredibly personal film with pitch-perfect performances. The standout was the nonactor Harold Russell for his portrayal of Homer and it earned him a nomination for Best Supporting Actor at that year’s Academy Awards. Fearing that he might not take home the statue, the Academy awarded Russell a special recognition “for bringing hope and courage to his fellow veterans through his appearance.” Later that night, Russell won the Best Supporting Actor award as well, making him the only actor to win two Oscars for the same performance. Best Years went on to run the table at the Oscars. Nominated for eight and winning seven, plus Russell’s honorary and a memorial award for producer Samuel Goldwyn, who got his wish. The Best Years of Our Lives sold 55 million tickets. Looks like darn near every man, woman and child did see it. Respond: letters@boulderweekly.com

Brothers done in deadpan style.” This English film has clever dialogue that will leave you laughing. Nov. 6, 7:30 only, VAC Basement Auditorium (1B20)

OPERA: II TROVATORE This musical feast from the Berlin Staatsoper stars Anna Netrebko and Plácido Domingo in debut roles at the head of an impressive ensemble directed by Daniel Barenboim. At Boedecker. — Boedecker Theater

THE STRANGE LITTLE CAT This film is Ramon Zürcher’s debut and it is truly one of the most interesting and unusual initial offerings ever. The film takes place on one afternoon in a Berlin apartment and contains everything from comedy to suspense to exceptionally creative cinematography. 7:30 p.m. Nov. 9 only, Muenzinger Auditorium

THE TRIP TO ITALY Steve Coogan and Rob Brydon team up for a thoughtful and sometimes outragesly funny roadtrip through the Italian countryside. 7:30 p.m. Nov. 7 and Nov. 8, Muenzinger Auditorium Respond: letters@boulderweekly.com

This 1944 film was controversial in its day for its bawdiness and use of the word “hell,” but now it’s just a classic comedy. It has been called “the Marx