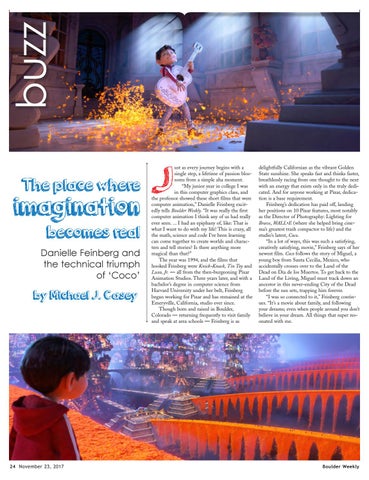 buzz The place where

Danielle Feinberg and the technical triumph of ‘Coco’

ust as every journey begins with a single step, a lifetime of passion blossoms from a simple aha moment. “My junior year in college I was in this computer graphics class, and the professor showed these short films that were computer animation,” Danielle Feinberg excitedly tells Boulder Weekly. “It was really the first computer animation I think any of us had really ever seen. ... I had an epiphany of, like: That is what I want to do with my life! This is crazy, all the math, science and code I’ve been learning can come together to create worlds and characters and tell stories? Is there anything more magical than that?” The year was 1994, and the films that hooked Feinberg were Knick-Knack, Tin Toy and Luxo, Jr. — all from the then-burgeoning Pixar Animation Studios. Three years later, and with a bachelor’s degree in computer science from Harvard University under her belt, Feinberg began working for Pixar and has remained at the Emeryville, California, studio ever since. Though born and raised in Boulder, Colorado — returning frequently to visit family and speak at area schools — Feinberg is as

delightfully Californian as the vibrant Golden State sunshine. She speaks fast and thinks faster, breathlessly racing from one thought to the next with an energy that exists only in the truly dedicated. And for anyone working at Pixar, dedication is a base requirement. Feinberg’s dedication has paid off, landing her positions on 10 Pixar features, most notably as the Director of Photography: Lighting for Brave, WALL•E (where she helped bring cinema’s greatest trash compactor to life) and the studio’s latest, Coco. “In a lot of ways, this was such a satisfying, creatively satisfying, movie,” Feinberg says of her newest film. Coco follows the story of Miguel, a young boy from Santa Cecilia, Mexico, who accidentally crosses over to the Land of the Dead on Día de los Muertos. To get back to the Land of the Living, Miguel must track down an ancestor in this never-ending City of the Dead before the sun sets, trapping him forever. “I was so connected to it,” Feinberg continues. “It’s a movie about family, and following your dreams; even when people around you don’t believe in your dream. All things that super resonated with me.