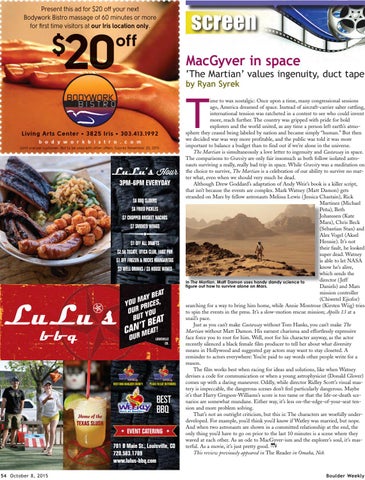 ime to wax nostalgic: Once upon a time, many congressional sessions ago, America dreamed of space. Instead of aircraft-carrier saber rattling, international tension was ratcheted in a contest to see who could invent more, reach further. The country was gripped with pride for bold explorers and the world united, as any time a person left earth’s atmosphere they ceased being labeled by nation and became simply “human.” But then we decided war was way more profitable, and the public was told it was more important to balance a budget than to find out if we’re alone in the universe. The Martian is simultaneously a love letter to ingenuity and Castaway in space. The comparisons to Gravity are only fair insomuch as both follow isolated astronauts surviving a really, really bad trip in space. While Gravity was a meditation on the choice to survive, The Martian is a celebration of our ability to survive no matter what, even when we should very much be dead. Although Drew Goddard’s adaptation of Andy Weir’s book is a killer script, that isn’t because the events are complex. Mark Watney (Matt Damon) gets stranded on Mars by fellow astronauts Melissa Lewis ( Jessica Chastain), Rick Martinez (Michael Peña), Beth Johanssen (Kate Mara), Chris Beck (Sebastian Stan) and Alex Vogel (Aksel Hennie). It’s not their fault, he looked super dead. Watney is able to let NASA know he’s alive, which sends the director ( Jeff In The Martian, Matt Damon uses handy dandy science to figure out how to survive alone on Mars. Daniels) and Mars mission controller (Chiwetel Ejiofor) searching for a way to bring him home, while Annie Montrose (Kirsten Wiig) tries to spin the events in the press. It’s a slow-motion rescue mission; Apollo 13 at a snail’s pace. Just as you can’t make Castaway without Tom Hanks, you can’t make The Martian without Matt Damon. His earnest charisma and effortlessly expressive face force you to root for him. Well, root for his character anyway, as the actor recently silenced a black female film producer to tell her about what diversity means in Hollywood and suggested gay actors may want to stay closeted. A reminder to actors everywhere: You’re paid to say words other people write for a reason. The film works best when racing for ideas and solutions, like when Watney devises a code for communication or when a young astrophysicist (Donald Glover) comes up with a daring maneuver. Oddly, while director Ridley Scott’s visual mastery is impeccable, the dangerous scenes don’t feel particularly dangerous. Maybe it’s that Harry Gregson-Williams’s score is too tame or that the life-or-death scenarios are somewhat mundane. Either way, it’s less on-the-edge-of-your-seat tension and more problem solving. That’s not an outright criticism, but this is: The characters are woefully underdeveloped. For example, you’d think you’d know if Watley was married, but nope. And when two astronauts are shown in a committed relationship at the end, the only thing you’d have to go on prior to the last 10 minutes is a scene where they waved at each other. As an ode to MacGyver-ism and the explorer’s soul, it’s masterful. As a movie, it’s just pretty good. This review previously appeared in The Reader in Omaha, Neb.