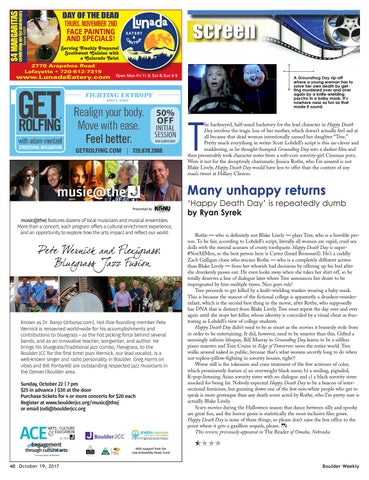 A Groundhog Day rip-off where a young woman has to solve her own death by getting murdered over and over again by a knife-wielding psycho in a baby mask. It’s nowhere near as fun as that made it sound.

he hackneyed, half-assed backstory for the lead character in Happy Death Day involves the tragic loss of her mother, which doesn’t actually feel sad at all because that dead woman intentionally named her daughter “Tree.” Pretty much everything in writer Scott Lobdell’s script is this un-clever and maddening, as he thought-humped Groundhog Day into a slasher film and then presumably took character notes from a soft-core sorority-girl Cinemax porn. Were it not for the deceptively charismatic Jessica Rothe, who I’m assured is not Blake Lively, Happy Death Day would have less to offer than the content of any man’s tweet at Hillary Clinton.

music@theJ features dozens of local musicians and musical ensembles. More than a concert, each program offers a cultural enrichment experience, and an opportunity to explore how the arts impact and reflect our world.

Known as Dr. Banjo (drbanjo.com), Hot Rize founding member Pete Wernick is renowned world-wide for his accomplishments and contributions to bluegrass - as the hot picking force behind several bands, and as an innovative teacher, songwriter, and author. He brings his bluegrass/traditional jazz combo, Flexigrass, to the Boulder JCC for the first time! Joan Wernick, our lead vocalist, is a well-known singer and radio personality in Boulder. Greg Harris on vibes and Bill Pontarelli are outstanding respected jazz musicians in the Denver/Boulder area. Sunday, October 22 | 7 pm $25 in advance | $30 at the door Purchase tickets for 4 or more concerts for $20 each Register at www.boulderjcc.org/music@thej or email Jodi@boulderjcc.org

‘Happy Death Day’ is repeatedly dumb by Ryan Syrek Rothe — who is definitely not Blake Lively — plays Tree, who is a horrible person. To be fair, according to Lobdell’s script, literally all women are vapid, cruel sex dolls with the mental acumen of crusty toothpaste. Happy Death Day is super#NotAllMen, so the best person here is Carter (Israel Broussard). He’s a cuddly Zach Galligan clone who rescues Rothe — who is a completely different actress than Blake Lively — from her whorish bad decisions by offering up his bed after she drunkenly passes out. He even looks away when she takes her shirt off, so he totally deserves a line of dialogue later where Tree announces her desire to be impregnated by him multiple times. Nice guys rule! Tree proceeds to get killed by a knife-wielding wanker wearing a baby mask. This is because the mascot of the fictional college is apparently a drunken-murderinfant, which is the second best thing in the movie, after Rothe, who supposedly has DNA that is distinct from Blake Lively. Tree must repeat the day over and over again until she stops her killer, whose identity is concealed by a visual cheat as frustrating as Lobdell’s view of college students. Happy Death Day didn’t need to be as smart as the movies it brazenly stole from in order to be entertaining. It did, however, need to be smarter than this. Gifted a seemingly infinite lifespan, Bill Murray in Groundhog Day learns to be a selfless piano maestro and Tom Cruise in Edge of Tomorrow saves the entire world. Tree walks around naked in public; because that’s what women secretly long to do when not topless-pillow-fighting in sorority houses, right?! Worse still is the tokenism and crass treatment of the few actresses of color, which prominently feature a) an overweight black nurse; b) a smiling, pigtailed, K-pop-listening Asian sorority sister with no dialogue and c) a black sorority sister mocked for being fat. Nobody expected Happy Death Day to be a beacon of intersectional feminism, but gunning down one of the few non-white people who get to speak is more grotesque than any death scene acted by Rothe, who I’m pretty sure is actually Blake Lively. Scary movies during the Halloween season that dance between silly and spooky are great fun, and the horror genre is statistically the most inclusive film genre. Happy Death Day is none of these things, so please don’t raise the box office to the point where it gets a gazillion sequels, please. This review previously appeared in The Reader of Omaha, Nebraska.

With support from the Lisa Antosofsky Music Fund