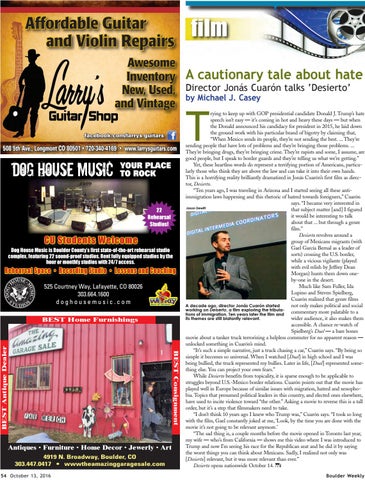 initely one of the most fun camps I went to this summer e, I went to a lot) and I came back for seconds. It taught make music with other musicians and that will be very the future. And I learned how to take a better solo.” -

Rockfacebook.com/larrys-guitars Out With A Friend

YOUR PLACE TO ROCK

rying to keep up with GOP presidential candidate Donald J. Trump’s hate speech isn’t easy — it’s coming in hot and heavy these days — but when the Donald announced his candidacy for president in 2015, he laid down the ground work with his particular brand of bigotry by claiming that, “When Mexico sends its people, they’re not sending the best. ... They’re sending people that have lots of problems and they’re bringing those problems. ... They’re bringing drugs, they’re bringing crime. They’re rapists and some, I assume, are good people, but I speak to border guards and they’re telling us what we’re getting.” Yet, these heartless words do represent a terrifying portion of Americans, particularly those who think they are above the law and can take it into their own hands. This is a horrifying reality brilliantly dramatized in Jonás Cuarón’s first film as director, Desierto. “Ten years ago, I was traveling in Arizona and I started seeing all these antiimmigration laws happening and this rhetoric of hatred towards foreigners,” Cuarón says. “I became very interested in Jason Dewitt that subject matter [and] I figured it would be interesting to talk about that ... but through a genre film.” Desierto revolves around a group of Mexicans migrants (with Gael García Bernal as a leader of sorts) crossing the U.S. border, while a vicious vigilante (played with evil relish by Jeffrey Dean Morgan) hunts them down oneby-one in the desert. Much like Sam Fuller, Ida Lupino and Steven Spielberg, Cuarón realized that genre films not only makes political and social A decade ago, director Jonás Cuarón started working on Deiserto, a film exploring the tribulacommentary more palatable to a tions of immigration. Ten years later the film and wider audience, it also makes them its themes are still blatantly relevant. accessible. A chance re-watch of Spielberg’s Duel — a bare bones movie about a tanker truck terrorizing a helpless commuter for no apparent reason — unlocked something in Cuarón’s mind. “It’s such a simple narrative, just a truck chasing a car,” Cuarón says. “By being so simple it becomes so universal. When I watched [Duel] in high school and I was being bullied, the truck represented my bullies. Later in life, [Duel] represented something else. You can project your own fears.” While Desierto benefits from topicality, it is sparse enough to be applicable to struggles beyond U.S.-Mexico border relations. Cuarón points out that the movie has played well in Europe because of similar issues with migration, hatred and xenophobia. Topics that presumed political leaders in this country, and elected ones elsewhere, have used to incite violence toward “the other.” Asking a movie to reverse this is a tall order, but it’s a step that filmmakers need to take. “I don’t think 10 years ago I knew who Trump was,” Cuarón says. “I took so long with the film, Gael constantly joked at me, ‘Look, by the time you are done with the movie it’s not going to be relevant anymore.’ “The sad thing is, a couple months before the movie opened in Toronto last year, my wife — who’s from California — shows me this video where I was introduced to Trump and now I’m seeing his race for the Republican seat and he did it by saying the worst things you can think about Mexicans. Sadly, I realized not only was [Desierto] relevant, but it was more relevant than ever.” Desierto opens nationwide October 14. Boulder Weekly