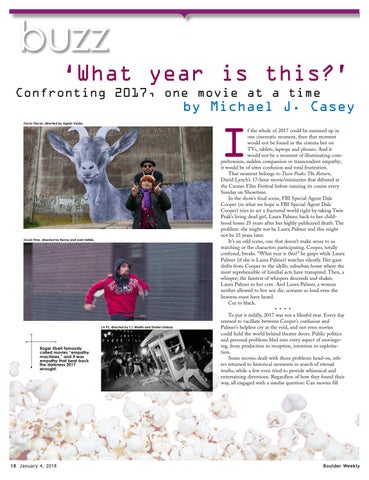 Roger Ebert famously called movies “empathy machines,” and it was empathy that beat back the darkness 2017 wrought.

f the whole of 2017 could be summed up in one cinematic moment, then that moment would not be found in the cinema but on TVs, tablets, laptops and phones. And it would not be a moment of illuminating comprehension, sudden compassion or transcendent empathy; it would be of utter confusion and total frustration. That moment belongs to Twin Peaks: The Return, David Lynch’s 17-hour movie/miniseries that debuted at the Cannes Film Festival before running its course every Sunday on Showtime. In the show’s final scene, FBI Special Agent Dale Cooper (or what we hope is FBI Special Agent Dale Cooper) tries to set a fractured world right by taking Twin Peak’s living dead girl, Laura Palmer, back to her childhood home 25 years after her highly publicized death. The problem: she might not be Laura Palmer and this might not be 25 years later. It’s an odd scene, one that doesn’t make sense to us watching or the characters participating. Cooper, totally confused, breaks. “What year is this?” he gasps while Laura Palmer (if she is Laura Palmer) watches silently. Her gaze drifts from Cooper to the idyllic suburban home where the most reprehensible of familial acts have transpired. Then, a whisper; the faintest of whispers descends and shakes Laura Palmer to her core. And Laura Palmer, a woman neither allowed to live nor die, screams so loud even the heavens must have heard. Cut to black. • • • • To put it mildly, 2017 was not a blissful year. Every day seemed to vacillate between Cooper’s confusion and Palmer’s helpless cry at the void, and not even movies could hold the world behind theater doors. Public politics and personal problems bled into every aspect of moviegoing, from production to reception, intention to exploitation. Some movies dealt with those problems head-on, others returned to historical moments in search of eternal truths, while a few even tried to provide whimsical and entertaining diversions. Regardless of how they found their way, all engaged with a similar question: Can movies fill