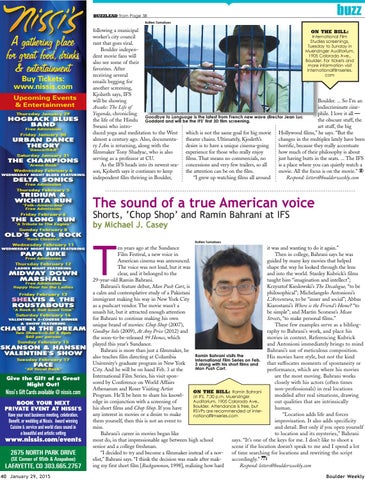 following a municipal ON THE BILL: International Film worker’s city council Studies screenings, rant that goes viral. Tuesday to Sunday in Boulder indepenMuenzinger Auditorium, 1905 Colorado Ave., dent movie fans will Boulder. For tickets and also see some of their more information visit favorites. After internationalfilmseries. com receiving several emails begging for another screening, Kjolseth says, IFS will be showing Boulder. ... So I’m an Awake: The Life of indiscriminate cineYoganda, chronicling phile. I love it all — Goodbye to Language is the latest from French new wave director Jean Luc the life of the Hindu Goddard and will be the IFS’ first 3D film screening. the obscure stuff, the Swami who introart stuff, the big duced yoga and meditation to the West which is not the same goal for big movie Hollywood films,” he says. “But the almost a century ago. Also, documenta- theater chains. Ultimately, Kjosleth’s changes in the multiplex lately have been desire is to have a unique cinema-going ry I Am is returning, along with the horrific, because they really accentuate experience for those who really enjoy filmmaker Tony Shadyac, who is also how much of their philosophy is about films. That means no commercials, no serving as a professor at CU. just having butts in the seats. ... The IFS As the IFS heads into its newest sea- concessions and very few trailers, so all is a place where you can quietly watch a the attention can be on the film. son, Kjolseth says it continues to keep movie. All the focus is on the movie.” “I grew up watching films all around independent film thriving in Boulder, Respond: letters@boulderweekly.com

THE LONG RUN “A Tribute to The Eagles”

MIDWAY DOWN MARSHALL Free Admission Happy Hour for the Ladies

Give the Gift of a Great Night Out!

Nissi’s Gift Cards available @ nissis.com BOOK YOUR NEXT PRIVATE EVENT AT NISSI’S Have your next business meeting, celebration, Benefit, or wedding at Nissis. Award winning Cuisine & service and world class sound in a beautiful and artistic setting

The sound of a true American voice Shorts, ‘Chop Shop’ and Ramin Bahrani at IFS by Michael J. Casey

en years ago at the Sundance it was and wanting to do it again.” Film Festival, a new voice in Then in college, Bahrani says he was American cinema was announced. guided by many key movies that helped The voice was not loud, but it was shape the way he looked through the lens clear, and it belonged to the and into the world. Stanley Kubrick’s films 29-year-old Ramin Bahrani. taught him “imagination and intellect”; Bahrani’s feature debut, Man Push Cart, is Krzysztof Kieslowski’s The Decalogue, “to be a calm and contemplative study of a Pakistani philosophical”; Michelangelo Antonioni’s immigrant making his way in New York City L’Avventura, to be “inner and social”; Abbas as a pushcart vendor. The movie wasn’t a Kiarostami’s Where is the Friend’s Home? “to smash hit, but it attracted enough attention be simple”; and Martin Scorsese’s Mean for Bahrani to continue making his own Streets, “to make personal films.” unique brand of movies: Chop Shop (2007), These few examples serve as a bibliogGoodbye Solo (2009), At Any Price (2012) and raphy to Bahrani’s work, and place his the soon-to-be-released 99 Homes, which movies in context. Referencing Kubrick played this year’s Sundance. and Antonioni immediately brings to mind Bahrani is more than just a filmmaker, he Bahrani’s use of meticulous composition. Ramin Bahrani visits the also teaches film directing at Columbia His movies have style, but not the kind International Film Series on Feb. University’s graduate program in New York that suffocates moments of spontaneity or 3 along with his short films and Man Push Cart. City. And he will be on hand Feb. 3 at the performance, which are where his movies International Film Series, his visit sponare the most moving. Bahrani works sored by Conference on World Affairs closely with his actors (often times Athenaeum and Roser Visiting Artist non-professionals) in real locations ON THE BILL: Ramin Bahrani Program. He’ll be here to share his knowlmodeled after real situations, drawing at IFS. 7:30 p.m. Muenzinger Auditorium, 1905 Colorado Ave., edge in conjunction with a screening of out qualities that are intrinsically Boulder. Attendance is free, but his short films and Chop Shop. If you have human. RSVPs are recommended at interany interest in movies or a desire to make “Location adds life and forces nationalfilmseries.com them yourself, then this is not an event to improvisation. It also adds specificity miss. and detail. But only if you open yourself Bahrani’s career in movies began like to location and its mysteries,” Bahrani most do, in that impressionable age between high school says. “It’s one of the keys for me. I don’t like to shoot a senior and a college freshman. scene if the location doesn’t speak to me and I spend a lot “I decided to try and become a filmmaker instead of a novof time searching for locations and rewriting the script elist,” Bahrani says. “I think the decision was made after makaccordingly.” Respond: letters@boulderweekly.com ing my first short film [Backgammon, 1998], realizing how hard Boulder Weekly