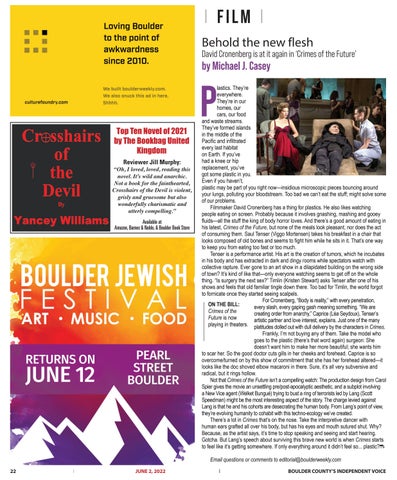 David Cronenberg is at it again in ‘Crimes of the Future’

lastics. They’re everywhere. They’re in our homes, our cars, our food and waste streams. They’ve formed islands in the middle of the Pacific and infiltrated every last habitat on Earth. If you’ve had a knee or hip replacement, you’ve got some plastic in you. Even if you haven’t, plastic may be part of you right now—insidious microscopic pieces bouncing around your lungs, polluting your bloodstream. Too bad we can’t eat the stuff; might solve some of our problems. Filmmaker David Cronenberg has a thing for plastics. He also likes watching people eating on screen. Probably because it involves gnashing, mashing and gooey fluids—all the stuff the king of body horror loves. And there’s a good amount of eating in his latest, Crimes of the Future, but none of the meals look pleasant, nor does the act of consuming them. Saul Tenser (Viggo Mortensen) takes his breakfast in a chair that looks composed of old bones and seems to fight him while he sits in it. That’s one way to keep you from eating too fast or too much. Tenser is a performance artist. His art is the creation of tumors, which he incubates in his body and has extracted in dark and dingy rooms while spectators watch with collective rapture. Ever gone to an art show in a dilapidated building on the wrong side of town? It’s kind of like that—only everyone watching seems to get off on the whole thing. “Is surgery the next sex?” Timlin (Kristen Stewart) asks Tenser after one of his shows and feels that old familiar tingle down there. Too bad for Timlin, the world forgot to fornicate once they started seeing scalpels. For Cronenberg, “Body is reality,” with every penetration, ON THE BILL: every slash, every gaping gash meaning something. “We are Crimes of the creating order from anarchy,” Caprice (Léa Seydoux), Tenser’s Future is now artistic partner and love interest, explains. Just one of the many playing in theaters. platitudes dolled out with dull delivery by the characters in Crimes. Frankly, I’m not buying any of them. Take the model who goes to the plastic (there’s that word again) surgeon: She doesn’t want him to make her more beautiful; she wants him to scar her. So the good doctor cuts gills in her cheeks and forehead. Caprice is so overcome/turned on by this show of commitment that she has her forehead altered—it looks like the doc shoved elbow macaroni in there. Sure, it’s all very subversive and radical, but it rings hollow. Not that Crimes of the Future isn’t a compelling watch: The production design from Carol Spier gives the movie an unsettling pre/post-apocalyptic aesthetic, and a subplot involving a New Vice agent (Welket Bungué) trying to bust a ring of terrorists led by Lang (Scott Speedman) might be the most interesting aspect of the story. The charge levied against Lang is that he and his cohorts are desecrating the human body. From Lang’s point of view, they’re evolving humanity to cohabit with this techno-ecology we’ve created. There’s a lot in Crimes that’s on the nose. Take the interpretive dancer with human ears grafted all over his body, but has his eyes and mouth sutured shut. Why? Because, as the artist says, it’s time to stop speaking and seeing and start hearing. Gotcha. But Lang’s speech about surviving this brave new world is when Crimes starts to feel like it’s getting somewhere. If only everything around it didn’t feel so... plastic? Email questions or comments to editorial@boulderweekly.com 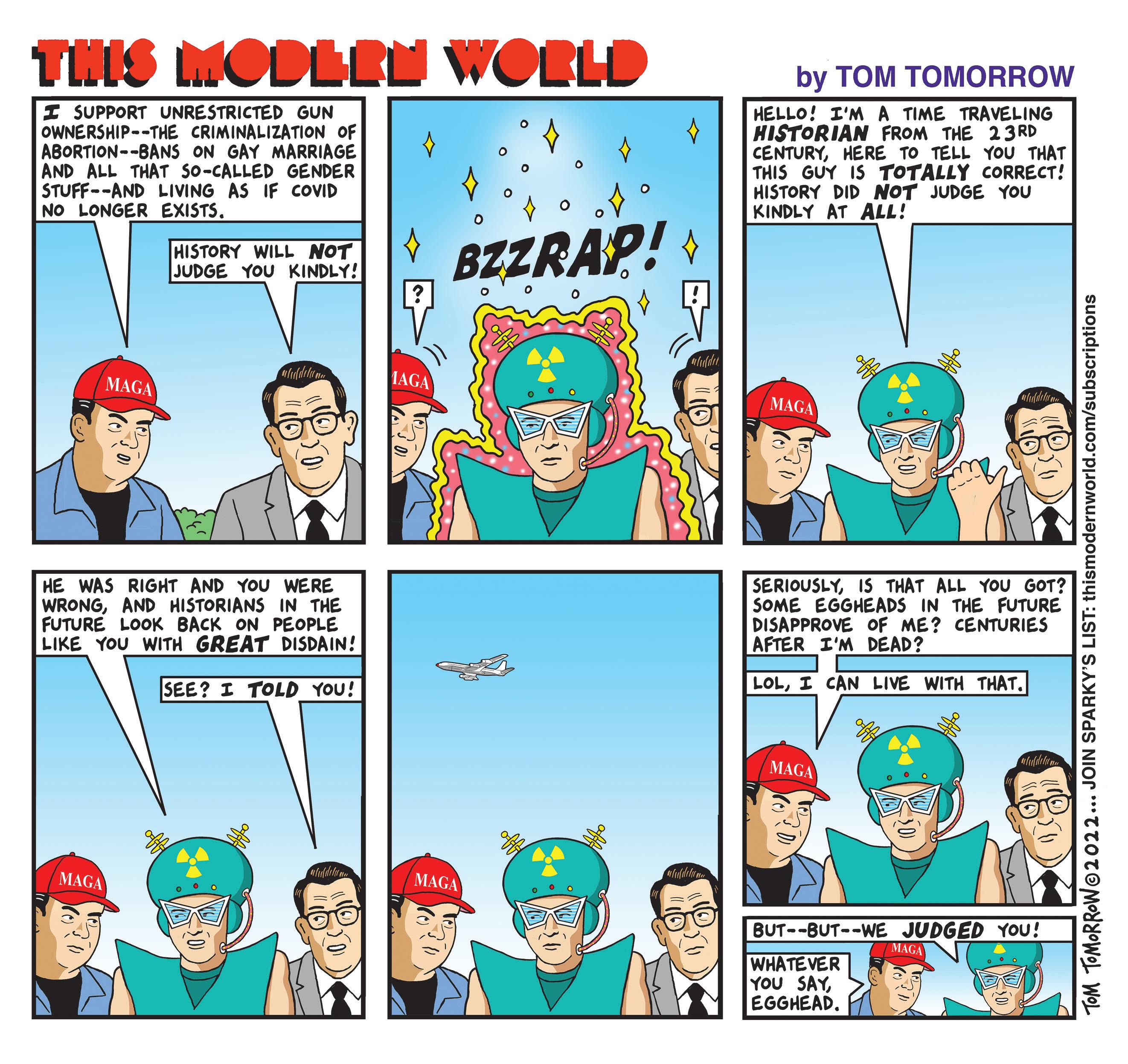 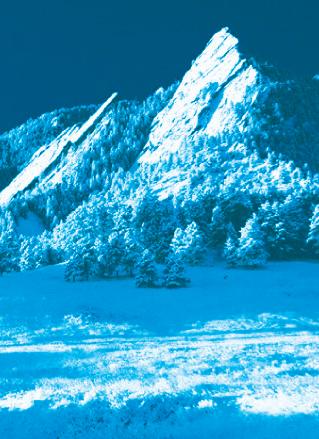 Events: What to do when there’s nothing to do 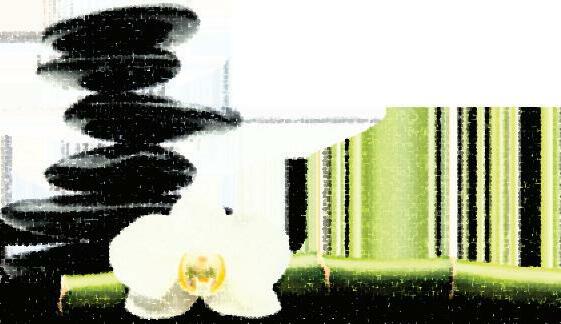 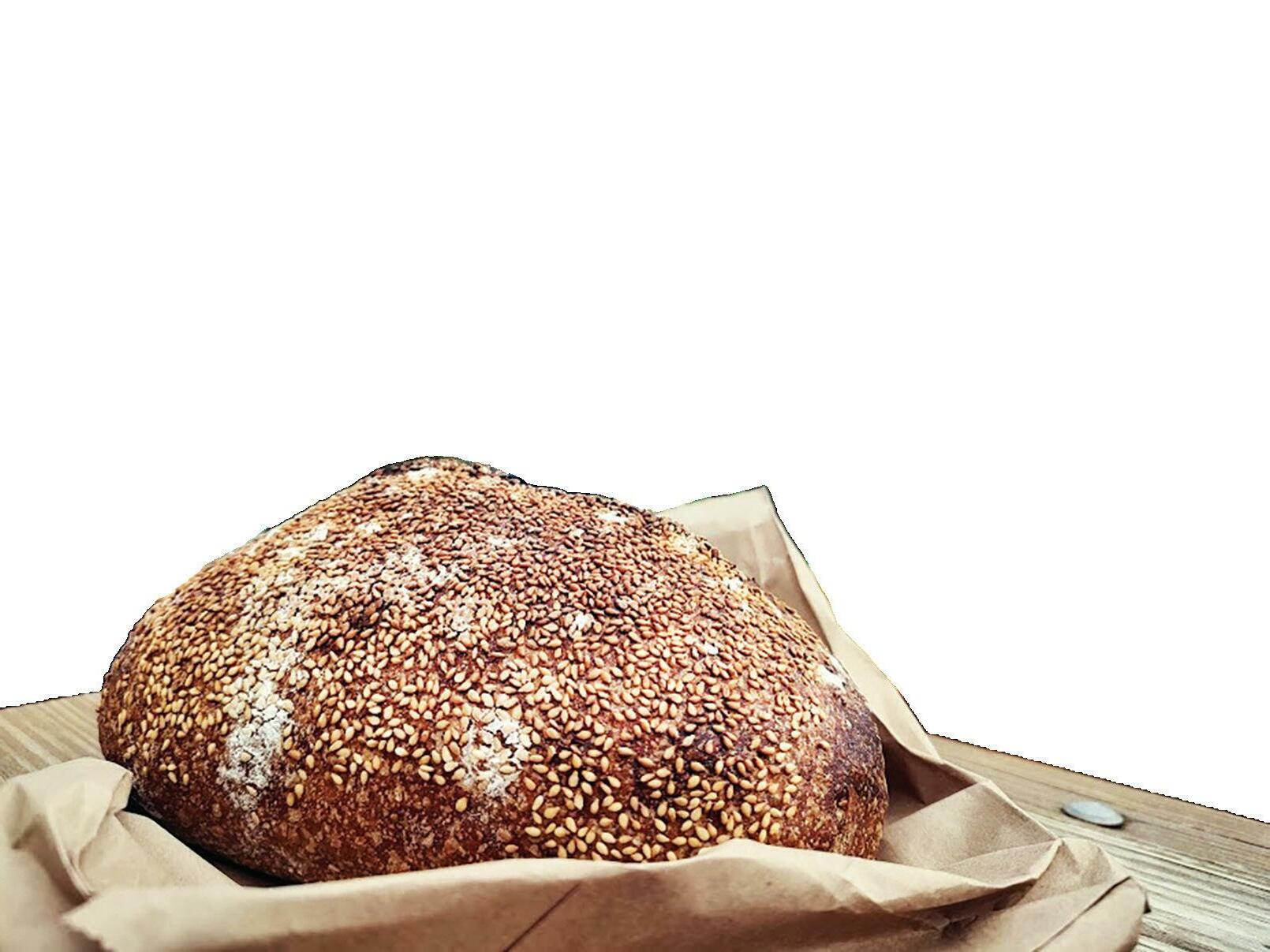 Cuisine: Taste of the Week: A slice of seeded perfection