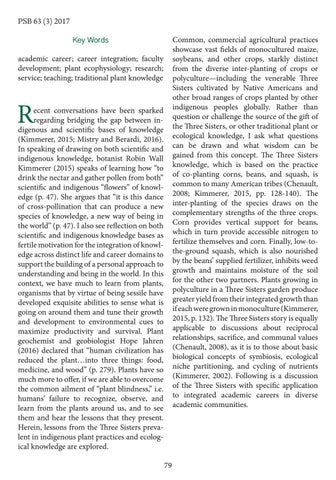 PSB 63 (3) 2017 Common, commercial agricultural practices showcase vast fields of monocultured maize, soybeans, and other crops, starkly distinct from the diverse inter-planting of crops or polyculture—including the venerable Three Sisters cultivated by Native Americans and other broad ranges of crops planted by other indigenous peoples globally. Rather than question or challenge the source of the gift of the Three Sisters, or other traditional plant or ecological knowledge, I ask what questions can be drawn and what wisdom can be gained from this concept. The Three Sisters knowledge, which is based on the practice of co-planting corns, beans, and squash, is common to many American tribes (Chenault, 2008; Kimmerer, 2015, pp. 128-140). The inter-planting of the species draws on the complementary strengths of the three crops. Corn provides vertical support for beans, which in turn provide accessible nitrogen to fertilize themselves and corn. Finally, low-tothe-ground squash, which is also nourished by the beans’ supplied fertilizer, inhibits weed growth and maintains moisture of the soil for the other two partners. Plants growing in polyculture in a Three Sisters garden produce greater yield from their integrated growth than if each were grown in monoculture (Kimmerer, 2015, p. 132). The Three Sisters story is equally applicable to discussions about reciprocal relationships, sacrifice, and communal values (Chenault, 2008), as it is to those about basic biological concepts of symbiosis, ecological niche partitioning, and cycling of nutrients (Kimmerer, 2002). Following is a discussion of the Three Sisters with specific application to integrated academic careers in diverse academic communities.

ecent conversations have been sparked regarding bridging the gap between indigenous and scientific bases of knowledge (Kimmerer, 2015; Mistry and Berardi, 2016). In speaking of drawing on both scientific and indigenous knowledge, botanist Robin Wall Kimmerer (2015) speaks of learning how “to drink the nectar and gather pollen from both” scientific and indigenous “flowers” of knowledge (p. 47). She argues that “it is this dance of cross-pollination that can produce a new species of knowledge, a new way of being in the world” (p. 47). I also see reflection on both scientific and indigenous knowledge bases as fertile motivation for the integration of knowledge across distinct life and career domains to support the building of a personal approach to understanding and being in the world. In this context, we have much to learn from plants, organisms that by virtue of being sessile have developed exquisite abilities to sense what is going on around them and tune their growth and development to environmental cues to maximize productivity and survival. Plant geochemist and geobiologist Hope Jahren (2016) declared that “human civilization has reduced the plant…into three things: food, medicine, and wood” (p. 279). Plants have so much more to offer, if we are able to overcome the common ailment of “plant blindness,” i.e. humans’ failure to recognize, observe, and learn from the plants around us, and to see them and hear the lessons that they present. Herein, lessons from the Three Sisters prevalent in indigenous plant practices and ecological knowledge are explored. 79