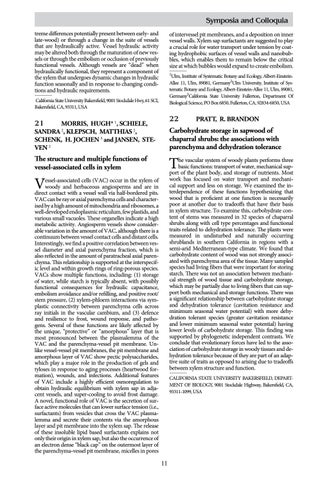 Symposia and Colloquia treme differences potentially present between early- and late-wood) or through a change in the suite of vessels that are hydraulically active. Vessel hydraulic activity may be altered both through the maturation of new vessels or through the embolism or occlusion of previously functional vessels. Although vessels are “dead” when hydraulically functional, they represent a component of the xylem that undergoes dynamic changes in hydraulic function seasonally and in response to changing conditions and hydraulic requirements.

of intervessel pit membranes, and a deposition on inner vessel walls. Xylem sap surfactants are suggested to play a crucial role for water transport under tension by coating hydrophobic surfaces of vessel walls and nanobubbles, which enables them to remain below the critical size at which bubbles would expand to create embolism. 1

Carbohydrate storage in sapwood of chaparral shrubs: the associations with parenchyma and dehydration tolerance

The structure and multiple functions of vessel-associated cells in xylem

he vascular system of woody plants performs three basic functions: transport of water, mechanical support of the plant body, and storage of nutrients. Most work has focused on water transport and mechanical support and less on storage. We examined the interdependence of these functions hypothesizing that wood that is proficient at one function is necessarily poor at another due to tradeoffs that have their basis in xylem structure. To examine this, carbohydrate content of stems was measured in 32 species of chaparral shrubs along with cell type percentages and functional traits related to dehydration tolerance. The plants were measured in undisturbed and naturally occurring shrublands in southern California in regions with a semi-arid Mediterranean-type climate. We found that carbohydrate content of wood was not strongly associated with parenchyma area of the tissue. Many sampled species had living fibers that were important for storing starch. There was not an association between mechanical strength of wood tissue and carbohydrate storage, which may be partially due to living fibers that can support both mechanical and storage functions. There was a significant relationship between carbohydrate storage and dehydration tolerance (cavitation resistance and minimum seasonal water potential) with more dehydration tolerant species (greater cavitation resistance and lower minimum seasonal water potential) having lower levels of carbohydrate storage. This finding was supported by phylogenetic independent contrasts. We conclude that evolutionary forces have led to the association of carbohydrate storage in woody tissues and dehydration tolerance because of they are part of an adaptive suite of traits as opposed to arising due to tradeoffs between xylem structure and function.

essel-associated cells (VAC) occur in the xylem of woody and herbaceous angiosperms and are in direct contact with a vessel wall via half-bordered pits. VAC can be ray or axial parenchyma cells and characterised by a high amount of mitochondria and ribosomes, a well-developed endoplasmic reticulum, few plastids, and various small vacuoles. These organelles indicate a high metabolic activity. Angiosperm vessels show considerable variation in the amount of VAC, although there is a continuum between vessel contact cells and distant cells. Interestingly, we find a positive correlation between vessel diameter and axial parenchyma fraction, which is also reflected in the amount of paratracheal axial parenchyma. This relationship is supported at the interspecific level and within growth rings of ring-porous species. VACs show multiple functions, including: (1) storage of water, while starch is typically absent, with possibly functional consequences for hydraulic capacitance, embolism avoidance and/or refilling, and positive root/ stem pressure, (2) xylem-phloem interactions via symplastic connectivity between parenchyma cells across ray initials in the vascular cambium, and (3) defence and resilience to frost, wound response, and pathogens. Several of these functions are likely affected by the unique, “protective” or “amorphous” layer that is most pronounced between the plasmalemma of the VAC and the parenchyma-vessel pit membrane. Unlike vessel-vessel pit membranes, the pit membrane and amorphous layer of VAC show pectic polysaccharides, which play a major role in the production of gels and tyloses in response to aging processes (heartwood formation), wounds, and infections. Additional features of VAC include a highly efficient osmoregulation to obtain hydraulic equilibrium with xylem sap in adjacent vessels, and super-cooling to avoid frost damage. A novel, functional role of VAC is the secretion of surface active molecules that can lower surface tension (i.e., surfactants) from vesicles that cross the VAC plasmalemma and secrete their contents via the amorphous layer and pit membrane into the xylem sap. The release of these insoluble lipid based surfactants explains not only their origin in xylem sap, but also the occurrence of an electron dense “black cap” on the outermost layer of the parenchyma-vessel pit membrane, micelles in pores

Conference abstracts as submitted for Botany 2016