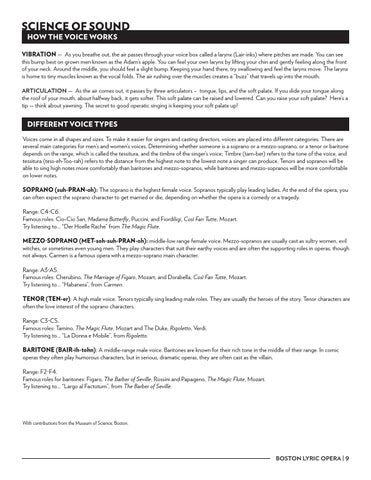 HOW THE VOICE WORKS VIBRATION — As you breathe out, the air passes through your voice box called a larynx (Lair-inks) where pitches are made. You can see this bump best on grown men known as the Adam’s apple. You can feel your own larynx by lifting your chin and gently feeling along the front of your neck. Around the middle, you should feel a slight bump. Keeping your hand there, try swallowing and feel the larynx move. The larynx is home to tiny muscles known as the vocal folds. The air rushing over the muscles creates a “buzz” that travels up into the mouth. ARTICULATION — As the air comes out, it passes by three articulators – tongue, lips, and the soft palate. If you slide your tongue along the roof of your mouth, about halfway back, it gets softer. This soft palate can be raised and lowered. Can you raise your soft palate? Here’s a tip — think about yawning. The secret to good operatic singing is keeping your soft palate up!

DIFFERENT VOICE TYPES Voices come in all shapes and sizes. To make it easier for singers and casting directors, voices are placed into different categories. There are several main categories for men’s and women’s voices. Determining whether someone is a soprano or a mezzo-soprano, or a tenor or baritone depends on the range, which is called the tessitura, and the timbre of the singer’s voice; Timbre (tam-ber) refers to the tone of the voice, and tessitura (tess-eh-Too-rah) refers to the distance from the highest note to the lowest note a singer can produce. Tenors and sopranos will be able to sing high notes more comfortably than baritones and mezzo-sopranos, while baritones and mezzo-sopranos will be more comfortable on lower notes. SOPRANO (suh-PRAN-oh): The soprano is the highest female voice. Sopranos typically play leading ladies. At the end of the opera, you can often expect the soprano character to get married or die, depending on whether the opera is a comedy or a tragedy. Range: C4-C6. Famous roles: Cio-Cio San, Madama Butterfly, Puccini, and Fiordiligi, Così Fan Tutte, Mozart. Try listening to… “Der Hoelle Rache” from The Magic Flute. MEZZO-SOPRANO (MET-soh-suh-PRAN-oh): middle-low range female voice. Mezzo-sopranos are usually cast as sultry women, evil witches, or sometimes even young men. They play characters that suit their earthy voices and are often the supporting roles in operas, though not always. Carmen is a famous opera with a mezzo-soprano main character. Range: A3-A5. Famous roles: Cherubino, The Marriage of Figaro, Mozart, and Dorabella, Così Fan Tutte, Mozart. Try listening to… “Habanera”, from Carmen. TENOR (TEN-er): A high male voice. Tenors typically sing leading male roles. They are usually the heroes of the story. Tenor characters are often the love interest of the soprano characters. Range: C3-C5. Famous roles: Tamino, The Magic Flute, Mozart and The Duke, Rigoletto, Verdi. Try listening to… “La Donna e Mobile”, from Rigoletto. BARITONE (BAIR-ih-tohn): A middle-range male voice. Baritones are known for their rich tone in the middle of their range. In comic operas they often play humorous characters, but in serious, dramatic operas, they are often cast as the villain. Range: F2-F4. Famous roles for baritones: Figaro, The Barber of Seville, Rossini and Papageno, The Magic Flute, Mozart. Try listening to… “Largo al Factotum”, from The Barber of Seville.

With contributions from the Museum of Science, Boston. 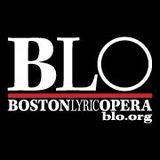