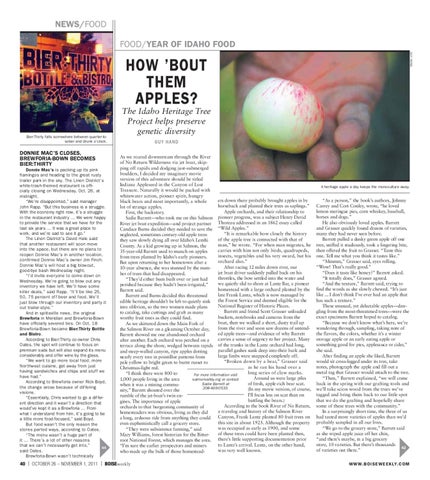 HOW ’BOUT THEM APPLES? Bier:Thirty falls somewhere between quarter-tosober and drunk o’clock.

DONNIE MAC’S CLOSES, BREWFORIA-BOWN BECOMES BIER:THIRTY Donnie Mac’s is packing up its pink ﬂamingos and heading to the great rusty trailer park in the sky. The Linen District’s white-trash-themed restaurant is ofﬁcially closing on Wednesday, Oct. 26, at midnight. “We’re disappointed,” said manager John Rapp. “But this business is a struggle. With the economy right now, it’s a struggle in the restaurant industry … We were happy to provide the service that we have for the last six years … It was a great place to work, and we’re sad to see it go.” The Linen District’s David Hale said that another restaurant will soon move into the space, but there are no plans to reopen Donnie Mac’s in another location, conﬁrmed Donnie Mac’s owner Jim Finch. Donnie Mac’s will host a big blowout, good-bye bash Wednesday night. “I’d invite ever yone to come down on Wednesday. We’re going to blow out any inventor y we have left. We’ll have some killer deals,” said Rapp. “It’ll be like 25, 50, 75 percent off beer and food. We’ll just blow through our inventor y and par ty it out trailer-style.” And in splitsville news, the original Brewforia in Meridian and Brewforia-Bown have ofﬁcially severed ties. On Oct. 18 Brewforia-Bown became Bier:Thirty Bottle and Bistro. According to Bier:Thirty co-owner Chris Oates, the spot will continue to focus on premium suds but will also expand its menu considerably and offer wine by the glass. “We want to go more local food, more Nor thwest cuisine, get away from just having sandwiches and chips and stuff we have had.” According to Brewforia owner Rick Boyd, the change arose because of differing visions. “Essentially, Chris wanted to go a different direction and it wasn’t a direction that would’ve kept it as a Brewforia … From what I understand from him, it’s going to be a little more food-focused,” said Boyd. But food wasn’t the only reason the stores par ted ways, according to Oates. “The menu wasn’t a huge par t of it … There’s a lot of other reasons that we can’t necessarily get into,” 44 said Oates. Brewforia-Bown wasn’t technically

The Idaho Heritage Tree Project helps preserve genetic diversity GUY HAND As we roared downstream through the River of No Return Wilderness via jet boat, skipping off rapids and dodging just-submerged boulders, I decided my imaginary movie version of this adventure should be titled Indiana Appleseed in the Canyon of Lost Treasure. Naturally it would be packed with whitewater action, pioneer spirit, hungry ers down there probably brought apples in by black bears and most importantly, a whole horseback and planted their trees as saplings.” lot of strange apples. Apple orchards, and their relationship to First, the backstory. Sadie Barrett—who took me on this Salmon pioneer progress, was a subject Henry David River jet boat expedition—and project partner Thoreau addressed in an 1862 essay called Candace Burns decided they needed to save the “Wild Apples.” “It is remarkable how closely the history neglected, sometimes century-old apple trees of the apple tree is connected with that of they saw slowly dying all over Idaho’s Lemhi man,” he wrote. “For when man migrates, he County. As a kid growing up in Salmon, the carries with him not only birds, quadrupeds, 35-year-old Barrett used to munch on apples insects, vegetables and his very sward, but his from trees planted by Idaho’s early pioneers. orchard also.” But upon returning to her hometown after a After racing 12 miles down river, our 10-year absence, she was stunned by the numjet boat driver suddenly pulled back on his ber of trees that had disappeared. throttles, the bow settled into the water and “They’d either been built over or just had we quietly slid to shore at Lantz Bar, a pioneer perished because they hadn’t been irrigated,” homestead with a large orchard planted by the Barrett said. late Frank Lantz, which is now managed by Barrett and Burns decided this threatened the Forest Service and deemed eligible for the edible heritage shouldn’t be left to quietly sink National Register of Historic Places. into oblivion, so the two women made plans Barrett and friend Scott Grasser unloaded to catalog, take cuttings and graft as many buckets, notebooks and cameras from the worthy fruit trees as they could ﬁnd. boat, then we walked a short, dusty trail up As we skittered down the Main Fork of from the river and soon saw dozens of untendthe Salmon River on a gleaming October day, ed apple trees—and evidence of why Barrett Barrett showed me one abandoned orchard carries a sense of urgency to her project. Many after another. Each orchard was perched on a terrace along the shore, wedged between rapids of the trunks in the Lantz orchard had long, parallel gashes sunk deep into their bark and and steep-walled canyon, ripe apples dotting large limbs were snapped completely off. nearly every tree in pointillist patterns from “Broken down by a bear,” Grasser said pale yellow to bright green to burnt russet to as he ran his hand over a Christmas-light red. long series of claw marks. “I think there were 800 to For more information visit Around us were large piles 1,000 people living in the area salmonvalley.org or contact Sadie Barrett at of fresh, apple-rich bear scat. when it was a mining commu208-469-0533. (In my movie version, of course, nity,” Barrett shouted over the I’ll focus less on scat than on rumble of the jet-boat’s twin enbattling the bears.) gines. The importance of apple According to the book River of No Return, orchards to that burgeoning community of a travelog and history of the Salmon River homesteaders was obvious, living as they did Canyon, Frank Lantz planted 80 fruit trees on a long, arduous ride from anything they could this site in about 1925. Although the property even euphemistically call a grocery store. was occupied as early as 1900, and some “They were subsistence farming,” said of these trees could have been planted then, Mary Williams, forest historian for the Bitterroot National Forest, which manages the area. there’s little supporting documentation prior to Lantz’s arrival. Lantz, on the other hand, “I’m sure the earlier prospectors and miners was very well known. who made up the bulk of those homestead-

A heritage apple a day keeps the monoculture away.

“As a person,” the book’s authors, Johnny Carrey and Cort Conley, wrote, “he loved lemon meringue pies, corn whiskey, baseball, horses and dogs.” He also obviously loved apples. Barrett and Grasser quickly found dozens of varieties, many they had never seen before. Barrett pulled a dusky green apple off one tree, sniffed it studiously, took a lingering bite, then offered the fruit to Grasser. “Taste this one. Tell me what you think it tastes like.” “Mmmm,” Grasser said, eyes rolling. “Wow! That’s really good.” “Does it taste like honey?” Barrett asked. “It totally does,” Grasser agreed. “And the texture,” Barrett said, trying to ﬁnd the words as she slowly chewed. “It’s just like ... I don’t think I’ve ever had an apple that has such a texture.” These unusual, yet delectable apples—dangling from the most-threatened trees—were the exact specimens Barrett hoped to catalog. “Because we don’t know what’s here, we’re wandering through, sampling, taking note of the ﬂavors, the colors, whether it’s a winter storage apple or an early eating apple or something good for pies, applesauce or cider,” she said. After ﬁnding an apple she liked, Barrett would sit cross-legged under its tree, take notes, photograph the apple and ﬁll out a metal tag that Grasser would attach to the tree. “Then,” Barrett explained, “we will come back in the spring with our grafting tools and we’ll take scion wood from the trees we’ve tagged and bring them back to our little spot that we do the grafting and hopefully share some of these trees with the community.” In a surprisingly short time, the three of us had tasted more varieties of apples than we’d probably sampled in all our lives. “We go to the grocery store,” Barrett said as she wiped apple juice off her chin, “and there’s maybe, in a big grocery store, 10 varieties. But there’s thousands 42 of varieties out there.” WWW. B O I S E WE E KLY. C O M 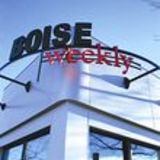