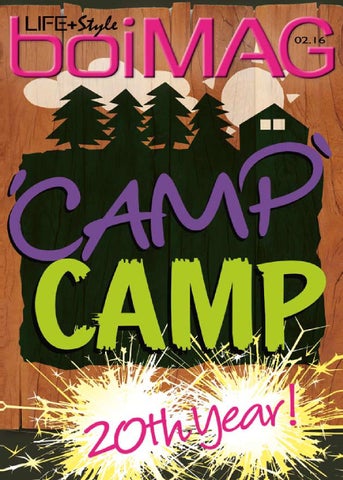 What I Did My Last Summer Vacation Warren Hoffman Last summer, I discovered the best gay vacation ever. No, it wasn’t a gay cruise or a trip to an island resort; it was ‘Camp’ Camp, the LGBT summer camp outside of Portland, Maine that’s celebrating its 20th anniversary this summer. Tired of the online apps filled with headless torsos, I was hungry to meet some real people and make new friends, but could this place about which I had heard nothing but raves live up to its expectations? Yes, and then some. Though anxious walking in as a single person who didn’t know a soul, in just one week I felt like I made 200 new best friends and shared some great laughs and amazing conversations. – continued on following page &gt;

individuals from across the U.S. (and even as far away as Australia) have traveled to this wooded paradise for a week of recreation that, in our technology-filled lives, is a real breath of fresh air. In just one week, I went kayaking, made stained glass, took a cooking class, went on a nature hike, and even conquered Camp’s ropes course, despite my fear of heights. (Yes, relaxing with cute guys sunning themselves on the lakeside dock is an activity, too!) And the fun just continues when the sun goes down. The first night, I found myself square dancing with a cute boy on my arm and a smile on my face at a barn dance with live fiddlers. By week’s end, I had performed in the Talent/No Talent Show, grooved at Tea Dance, and cheered on new friends at karaoke. While the accommodations were just shared cabins with simplecamp-style bunks, everyone enjoyed three fresh, lip- smacking chef-prepared meals every day – and everything was included for one reasonable price.

‘Camp’ Camp is everything you

could ever want in a great vacation, with an extra bonus, the campers themselves. Even if you come by yourself, you won’t meet a more open, welcoming, and friendly group of people. So, put down your phone and come to ‘Camp’ Camp. I’m headed back again myself, and we all can’t wait to meet you! ‘Camp’ Camp 2016 happens August 21-28. Visit www.campcamp.com for complete details. Warren Hoffman has worked in the theater, arts, and Jewish communities for close to 10 years. He is the author of The Great White Way: Race and the Broadway Musical. You can read more about him at www. warrenhoffman.com. boiMAG 13

Long recognized as an annual rite of spring, a celebration of St. Patrick’s Day and the kickoff to the outdoor running season in Chicago, the 37th annual Shamrock Shuffle 8K takes runners on a scenic tour of downtown Chicago, starting and finishing in Grant Park. The race will begin at 8:30 a.m. on Sunday, April 3, and will conclude with live music at the traditional Post-­Race

Party in Grant Park. In advance of the event, the two-­day Shamrock Shuffle 8K Health &amp; Fitness Expo will take place at McCormick Place on Friday, April 1, and Saturday, April 2, featuring more than 80 industry-­related exhibitors. The Health &amp; Fitness Expo is free and open to the public. For more information about the event and how to get involved, go to www.shamrockshuffle.com. - continued on a following page-

The Shamrock Shuffle 8K announced that 2015 champions Stephen Sambu (Tucson, Ariz.) and Alexi Pappas (Eugene, Ore.) will return to the streets of Chicago to kick off the spring running season and race for repeat victories. Joining Sambu and Pappas will be some of the nation’s most talented club runners, who will be competing for prize money in the eighth annual Deloitte Elite Club 8K Competition. “With the Shamrock Shuffle, we strive to create a race that welcomes both Olympic caliber athletes and first-­time runners. The result is one of the best running celebrations in the city!” The eighth annual team competition welcomes men’s and women’s USATF-­member racing teams from across the country, vying for a $20,000 prize purse. “Deloitte is proud to sponsor this great tradition of racing in Chicago,” said Chairman and Chief Executive Officer of Deloitte Tax LLP Carl Allegretti. “The Elite Club 8K Competition shares in our commitment to supporting well-­being, both personally and professionally” said Chairman and Chief Executive Officer of Deloitte Tax LLP Carl Allegretti. Last year, the competition attracted more than 200 athletes and 55 elite running teams from across the country. For the fourth year in a row, runners from the Michigan-­based Hansons-­Brooks Distance Project won both the men’s and women’s elite individual titles.

THE NAKED MAGIC SHOW Sleeves Up, Pants Down!

“The most entertaining show of the year” according to AussieTheatre.com.au. After sold out shows around the globe, Murray &amp; Peter proudly present the world’s naughtiest magic show for one night only, Friday April 29th, at 7:30pm &amp; 10:30pm, Park West, 322 W. Armitage Ave., Chicago, IL. 60614. Get ready for two hot, hilarious magicians (Christopher Wayne and Mike Tyler) starring in this R-Rated spectacle, premiering in America. Seeing is believing! Good magicians don’t need sleeves and great magicians don’t need pants. $50 - $20 reserved seats on-sale Friday February 26th at 10am at the box office, www.Etix.com, or charge-by-phone 800-514-3849. $75 VIP seats including a meet and greet (and pics) with the stars are also available. Exclusive pre-sale starts on Wednesday February 24th at 10am for all Park West subscribers and MPPresent e-list. Please note: Must be 18+ to enter due to Adult content. 22 boiMAG 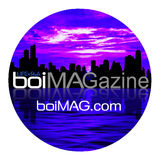