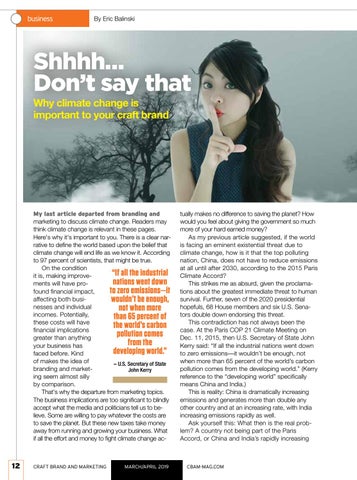 My last article departed from branding and marketing to discuss climate change. Readers may think climate change is relevant in these pages. Here's why it's important to you. There is a clear narrative to define the world based upon the belief that climate change will end life as we know it. According to 97 percent of scientists, that might be true. On the condition “If all the industrial it is, making improvenations went down ments will have proto zero emissions—it found financial impact, affecting both busiwouldn’t be enough, nesses and individual not when more incomes. Potentially, than 65 percent of these costs will have the world’s carbon financial implications pollution comes greater than anything from the your business has developing world.” faced before. Kind of makes the idea of – U.S. Secretary of State branding and marketJohn Kerry ing seem almost silly by comparison. That's why the departure from marketing topics. The business implications are too significant to blindly accept what the media and politicians tell us to believe. Some are willing to pay whatever the costs are to save the planet. But these new taxes take money away from running and growing your business. What if all the effort and money to fight climate change ac-

tually makes no difference to saving the planet? How would you feel about giving the government so much more of your hard earned money? As my previous article suggested, if the world is facing an eminent existential threat due to climate change, how is it that the top polluting nation, China, does not have to reduce emissions at all until after 2030, according to the 2015 Paris Climate Accord? This strikes me as absurd, given the proclamations about the greatest immediate threat to human survival. Further, seven of the 2020 presidential hopefuls, 68 House members and six U.S. Senators double down endorsing this threat. This contradiction has not always been the case. At the Paris COP 21 Climate Meeting on Dec. 11, 2015, then U.S. Secretary of State John Kerry said: “If all the industrial nations went down to zero emissions—it wouldn’t be enough, not when more than 65 percent of the world’s carbon pollution comes from the developing world.” (Kerry reference to the “developing world” specifically means China and India.) This is reality: China is dramatically increasing emissions and generates more than double any other country and at an increasing rate, with India increasing emissions rapidly as well. Ask yourself this: What then is the real problem? A country not being part of the Paris Accord, or China and India’s rapidly increasing