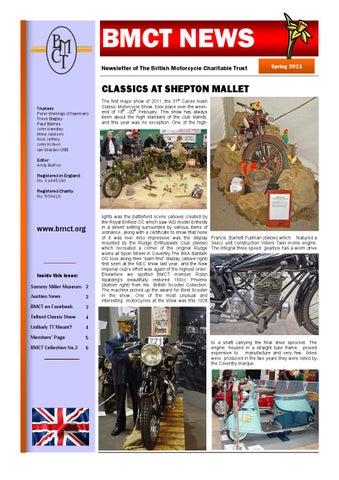 The first major show of 2011, the 31st Carole Nash Classic Motorcycle Show, took place over the weekend of 19th -20th February. This show has always been about the high standard of the club stands, and this year was no exception. One of the high-

lights was the battlefield scene (above) created by the Royal Enfield OC which saw WD model Enfields in a desert setting surrounded by various items of ordnance, along with a certificate to show that none of it was live! Also impressive was the display Francis Barnett Pullman (below) which featured a mounted by the Rudge Enthusiasts Club (below) 344cc unit construction Villiers Twin in-line engine. which recreated a corner of the original Rudge The integral three speed gearbox has a worm drive works at Spon Street in Coventry.The BSA Bantam OC took along their “barn find” display (above right) first seen at the NEC show last year, and the New Imperial club‟s effort was again of the highest order. Elsewhere we spotted BMCT member Robin Spalding‟s beautifully restored 150cc Phoenix (bottom right) from his British Scooter Collection. The machine picked up the award for Best Scooter in the show. One of the most unusual and interesting motorcycles at the show was this 1928

to a shaft carrying the final drive sprocket. The engine, housed in a straight tube frame, proved expensive to manufacture and very few bikes were produced in the two years they were listed by the Coventry marque.

Sammy Miller has been very busy over the winter! The space at the museum which was formerly occupied by the workshop and stores has now been converted into an extension of the museum itself, with a glass door allowing you to see Sammy and Bob beavering away in the new workshop area. The new exhibition area is to be called the Evolving Classics Hall and the official opening is due on Sunday 20th March with Alan Cathcart and Mick Woollett doing the honours. Some of the exhibits in the new display will be classic Hondas, Yamahas and Suzukis, as well as rotary

engined machines from DKW and Norton. On the Italian front there are examples of Benelli, Moto Guzzi, Mondial and Gilera, as well as a Jonghi from France and a Harley Davidson from the USA. Rearranging the museum means that Sammy now has space for some exciting newcomers which will appeal to those with an interest in the huge diversity of British motorcycle engineering. A 1920 Wooler flat twin “Flying Banana” has just emerged from restoration in the workshops, as has Gordon Jackson‟s famous short stroke AJS trials bike. The Ajay (187 BLF) will be heading off to the Scottish Six Days Trial to mark the 50th Anniversary of Gordon‟s win with only one mark

lost, along with Sammy‟s famous Ariel GOV 132, on which he took second place to Gordon all those years ago. The unique prototype ohv in line four cylinder 660cc AJS is nearing completion in Sammy‟s workshop and it is hoped that this will be fired up on the opening day along with the 1927 Sunbeam Model 9 which will also be finished in time. Several other machines will be run up and demonstrated by Alan Cathcart including the BSA MC1 DOHC racer and the racing OHC 1933 AJS 500cc. Sammy also advises us that the tea rooms have had a bit of a makeover during the winter, and there are mouthwatering new menus to enjoy.

A view of the new extension. Look closely and you can see the new workshop through the door in the background.

SAMMY MILLER MUSEUM EVENTS 2011 Sammy has a full programme of events scheduled at the museum for 2011. As always it’s advisable to check the event is still on before setting out! The museum’s number is 01425 620777

AUCTION NEWS Bonhams are to sell a truly unique motorcycle which has spectacularly covered over 1 million kilometres at the hands of one careful owner. It will be auctioned at the International Motorcycle Show in Staffordshire on April 24th 2011 and has

attracted a pre-sale estimate of £35,000 - £40,000. Fondly nicknamed “Vinnylonglegs”, this 1955 Vincent Black Prince is probably one of the most travelled motorcycles in existence, having regularly toured Europe to notch up its staggering 721,703 miles. Northumbrian born Vincent enthusiast Stuart Jenkinson bought his new 998cc Black

Prince from St. Andrew's Motors in Newcastle-upon-Tyne in 1955. Since then he is the only person who has ever ridden it – with the sole exception, presumably, of the original works tester. Of the three Vincents he has owned it is undoubtedly his favourite. For 25

Slovenia, Serbia, Croatia, Bosnia, Albania, Macedonia, Czechoslovakia, Montenegro, France, Italy, Spain, Portugal, Norway, Finland, Sweden, Hungary and Greece. There have been more than 40 Greece tours of over 3,000 miles each, since 1962. On continental roads the machine has the ability to cruise all day at 100mph with a top speed in excess of 120mph.

Further to the item in the last newsletter on the forthcoming auction sale of George Brough‟s personal SS100 Alpine Grand Sport, we can report that the bike failed to make its reserve at the Philips de Pury sale in New York. The bidding stalled at $470,000, well below the estimate of $600,000 - $700,000, but the auctioneers report that there has been significant post-auction interest in the machine.

...this Vincent Black Prince is probably one of the most travelled motorcycles in existence...

WE’RE NOW ON FACEBOOK! Good news! The BMCT no w has its o wn Facebook group page where members can comment, post photos or exchange views on anything to do with British motorcycles. We will be using the page to post photos and let members know about upcoming events. If you already have a Facebook account just put the name of our group in the search box to find us. If you‟re not on Facebook yet, it‟s easy and free to join at www.facebook.com

CLASSIC OFF-ROAD AND RACING SHOW Alan Wright‟s annual Classic Off-Road and Road Racing Show kicked off the 2011 show season at the Telford International Centre in mid February. Guest of honour was former works BSA scrambler Jeff Smith, who won world championships for the Small Heath marque in 1964 and 1965 on their Victor machines. Also in attendance was Sammy Miller, who was showing the recently restored works AJS that Gordon Jackson used to win the Scottish Six Days Trial in 1961 with the loss of only one mark, with Sammy

himself runner-up on his Ariel. The Ajay was due to go off to Scotland shortly after the show to be ridden by Gordon in a parade at this year‟s Scottish celebrating fifty years since his momentous achievement. In the road racing halls there were displays of machinery from clubs like the VMCC‟s British Historic Racing who were publicising their race series which starts off at Mallory Park on Easter Monday, and the Norton Owners Club featured the famous monocoque racer used to such good effect by riders like Peter Williams, who was also in attendance at the show, as was multiple world champion and former Norton teammate Phil Read MBE.

This 650cc flat tracker features a unit construction Triumph engine in a BSA A10 frame. The forks are Husqvarna items. Two legends of motorcycling - Jeff Smith MBE and Sammy Miller MBE. In the foreground is Gordon Jackson’s ISDT AJS

Two examples of the Cheetah, made by Bob Gollner in Hampshire between 1967 and 1969.

AN UNLIKELY TT MOUNT Eric Oliver was, in the years after World War Two, the finest racing sidecar rider in the world. He was World Champion four times, won an Isle of Man TT race and countless minor road races always on a NortonWatsonian outfit. In later years success would have been easier on a foreign multi cylinder machine but fiercely patriotic Oliver stuck to the British single cylinder saying he had flown British during the war and would always race British. After an illustrious career Oliver retired in 1955 but was unable to resist a one-off return to the Sidecar TT in 1958 riding this standard 500cc Norton Dominator 88 with a Watsonian Monaco sidecar crewed by Mrs. Pat Wise. The duo had a comfortable ride to 10th place, averaging nearly 70mph and securing a bronze replica along the way.

NEW MEMBERS We welcome the following new members and supporters of our cause:

I restored this Ariel 500 VG myself, having bought it in derelict condition. By “restored” I mean I coordinated everybody else‟s work and put the bike together myself. All numbers match except the registration number, someone must have sold the original at some point. The bike has won awards for Best Single at the Ariel Owners‟ Club Rally in 2006 and 2008. - Michael Stuart, Member no. A448 Did you receive your Winter 2010 newsletter? The awful December weather affected postal deliveries in some areas of the country, and we understand that some newsletters and renewal forms were lost in the post. If yours didn‟t arrive then please contact Andy Bufton by phone or e-mail, or text him on 07754 880116 with your membership number and we‟ll mail another copy out to you.

Who are we…? The British Motorcycle Charitable Trust was originally founded in 1979 as a means of raising funds to establish what was to become the National Motorcycle Museum at Bickenhill, near Birmingham. By 1995 the museum was well established as a successful commercial venture, and it and the charity became separate organisations. A new board of trustees was appointed to manage the assets of the BMCT as it pursues its objective to preserve and promote British motorcycle engineering heritage and awareness of the 700+ different makes originating from the United Kingdom. Registered Office and Administration Matchless Management Services Holly Cottage Main Street Bishampton Pershore WR10 2NH Tel: 01386 462524 Mob: 07754 880116 E-mail: info@bmct.org

Our funding comes from bequests, donations, membership fees and interest on our reserves. We have an expanding network of affiliated museums that we assist with projects to improve their motorcycle exhibitions and we also own a growing collection of rare and unusual British machines which can be seen on display at various locations throughout the country. Our members enjoy free entry to all our affiliated museums for the very reasonable sum of £20 a year. To enquire about membership or to find out about how you can help the trust through a donation or bequest, please contact Andy Bufton at the address on the left.

THE BMCT COLLECTION Number 2. 1937 Brough Superior SS80 In 1919 George Brough left the family motorcycle firm to set up on his own making V twin machines in competition with his father‟s flat twins. Calling his bikes Brough Superior left one in no doubt as to which was the better machine, in George‟s opinion at least! The Brough works in Nottingham produced bikes with mainly JAP and Matchless engines until 1940 and earned the title “Rolls Royce of Motorcycles”. When motorcycle production ceased the company carried on as precision engineers. This example of the SS80 model (so called because of its claimed top speed) features Brough‟s own petrol tube sidecar with its ability to carry 1.5 gallons of spare fuel. It was purchased by the BMCT at the dispersal sale of the world renowned Geeson Collection in March 2003 and is now on long term loan in the BMCT Motorcycle Hall at the Haynes International Motor Museum at Sparkford in Somerset.