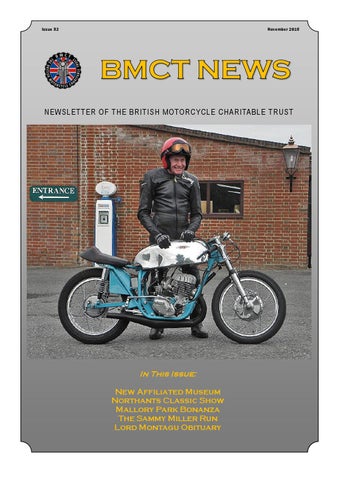 We’re delighted to be able to announce that the Dover Transport Museum is the fourteenth museum to affiliate with the BMCT. Our members will now be able to visit free of charge this fascinating collection, housed in a former Army leisure centre on the outskirts of Dover, which celebrates the area’s connections with transport on land, sea and air. Norman motorcycles were made in Ashford, just up the road from the museum, between 1939 and 1961, so it’s no surprise that the make features strongly in the museum’s collection. Indeed, it’s their intention to eventually have a Norman themed exhibition showing as many different models of the marque as possible. The museum is staffed entirely by enthusiastic volunteers, and has its own workshops where newly acquired exhibits are restored or conserved as appropriate before they go on show. Currently on the bench in the motorcycle section is a very early Ivy which is now being re-assembled (below) ready to take its place in the line-up of bikes.

Many of the museum’s exhibits are housed behind replica shop fronts bearing the names of actual businesses that traded in Dover and surrounding areas in the past. There’s a wonderful model railway layout, a hall devoted to models of cross-channel ferries, and the main hall houses the oldest known surviving PierceArrow lorry, supplied to the British Army in World War 1. A splendid museum, well worth a visit. They are open on Wednesday, Saturday, Sunday and Bank Holidays between March and October, and Sundays only during autumn and winter.

The 2nd Annual Northants Vintage and Classic Bike Show in aid of charity took place at the Star and Garter in Chelveston on 22nd August, and once more the British Motorcycle Charitable Trust was honoured to be selected as the main beneficiary. Stuart MacDowell and his team put on an excellent show, which was blessed with fine weather right up until we were packing up to leave, when we felt the first drops of rain on our heads. There were prizes for all categories of machines, and a great time was had by all. Weâ&#x20AC;&#x2122;re looking forward to the 2016 edition, date to be announced.

The demise of the VMCCâ&#x20AC;&#x2122;s Festival of 1,000 Bikes looked as if it would leave a big hole in the classic motorcycling calendar, but luckily Mallory Park have stepped into the breach to organise their own version of the event. Slightly lower key than the VMCC version (and correspondingly less crowded) the Saturday of the two-day event gave owners plenty of track time to enjoy their classics, like the Ariel Arrow owner who got quicker every lap until the ironmongery touched down! Sunday was reserved for the more exotic racing machines, piloted for the most part by celebrity riders. It was nice to see the Brooklands Museum guys there enthusiastically exercising some of the machines from their collection (numbers 17 and B3).

Edward, 3rd Baron Montagu of Beaulieu, was the devoted custodian of his family’s 7,000-acre Beaulieu Estate in Hampshire. He was also a champion of the historic vehicle movement and founder of the National Motor Museum. He played a major role in the preservation of England’s historic houses and the development of the UK tourism industry.

born. In the same year, he also launched Veteran and Vintage magazine, which he published until its sale to IPC in 1979 (it later became Collectors’ Cars and eventually Classic Cars).

3 The 2015 Sammy Miller Run took place on 30th August and once more was blessed with fine weather. Riders aboard a wide variety of machines enjoyed a jaunt through the New Forest receiving

You may recall in BMCT News no. 27 we reported on BMCT member Colin Seeley seeing his father Percy’s old Series A HRD Vincent Rapide for the first time in many years after it emerged from a long and painstaking restoration. Well, at the recent Salon Privé concours event at Blenheim Palace, Colin got the chance to ride the restored bike again, some 60 years after he last threw a leg over it. Our photos (courtesy of Ian Daisley at Probike Art) show Colin aboard the Vincent, acknowledging the spectators, and discussing the experience with BMCT trustee John Kidson.

M u s e u m There’s a lot happening at the Heritage Motor Centre at Gaydon this winter. With building of the new £4m Collections Centre already in progress, the museum itself will be closed for redevelopment from 30th November 2015. The new look museum and Collections Centre will open to the public on Saturday 13th February 2016. Remembering BMCTpractice, member Bob whoMiller passed away recently, As is their usual the Dowty, Sammy Museum opening aged will be restricted to weekends only during the winter times months. If you’re planning a visit there, it’s best to check beforehand to make sure they’re open. The number to ring is 01425 620777.

The Black Country Living Museum will also be operating restricted hours for the winter. From November to March they will be open Wednesday to Sunday, and the museum will be closed completely from 30th December until 12th January. Check their website for Christmas opening times. The Haynes International Motor Museum closes at 4.30pm every day from November to March, so aim to get there early, there’s a lot to see! The Museum in the Park at Stroud closes for the month of December every year for conservation and deep cleaning.

D o w t y Isle of Man BMCT member Bob Dowty passed away in July, aged 84. Bob was a keen motorcyclist and road racer, competing in the Southern 100 and Manx Grand Prix, and right up until 2011 was chairman of the Isle of Man arm of the aerospace engineering company founded in Gloucestershire by his uncle, Sir George Dowty. BMCT Trustee John Kidson knew him well and has this to say about Bob’s amateur racing career : “Bob rode in 15 MGP races between 1951 and 1958. In '51 and '52 he rode Douglases in the Junior, in '53 he rode a 7R in the Junior but all his other Junior and Senior races were on Manx Nortons. His best placings were 3rd in the '56 Junior and also in the '57 Senior. He was also 4th once and 5th twice and 6th twice. Out of 15 races he finished 11 times and retired 4 times, which is a very good record. He rode for Reg Dearden in the last few years so had good bikes. He was 84 so he had a good innings, and still had a Manx in the stairwell of his house!”.

Jill Honeybun writes: “Between 1973 and 1976 my late husband and I lived in the outback of Western Australia. Ken was a leading hand fitter for an iron ore mining company during the day, and a keen motorcycle restorer and steam enthusiast when off duty. We returned to the UK having bought an Atkinson steam wagon, a Fowler traction engine, a BSA G14, and an EMC! Sadly Ken died suddenly in 2006, and recently I came across some old paperwork for the EMC, which we sold to someone in Bradford on Avon some years previously. Your EMC is the only one I can find on the internet, and I’m wondering if by any chance it is “ours”, in which case I will happily give you the information.”

S i n g l e s Amazingly, it transpires that the BMCT’s 1947 EMC, which now resides in the London Motorcycle Museum, is Ken and Jill Honeybun’s actual bike! The sheaf of paperwork Jill sent us contains lots of correspondence between previous owners of the machine, and even a photo of it in café racer guise before being found by Ken, who restored it to its original specification. Coincidentally, member Roy Lambert recently got in touch to say he had acquired an EMC too. Roy’s is a 1949 example which he acquired at an H&H Classics auction in Droitwich.

The same bike in Australia in its café racer days.

The October 2015 issue of The Classic MotorCycle carried a two page interview with your editor...

At first glance you think “Lovely Matchless G45”, but look a little closer… Spotted in the paddock at Kop Hillclimb. Thanks to Roy Osborn for the photo.

The Trust was originally formed to facilitate the building of the National Motorcycle Museum at Bickenhill, near Solihull in the West Midlands, but since 1995 the BMCT has been an entirely separate organisation, a grant - making Charity dedicated to the promotion of British motorcycle engineering heritage through a network of affiliated transport museums throughout the country. Membership is open to all, and allows free entry to all the museums in the scheme. Our funding comes from membership fees, bequests, donations and income from investments. Please direct any enquiries to the secretary, Andy Bufton, at the address on the left.

Come and See us on the bmct stand in hall 5