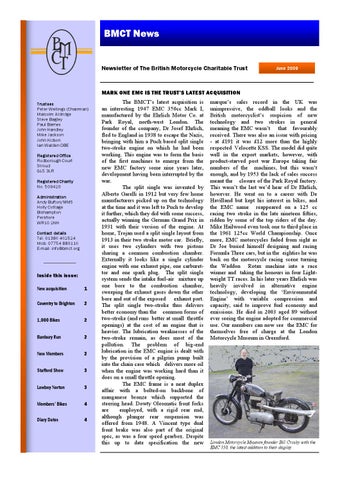 Inside this issue: New acquisition

The BMCT‟s latest acquisition is an interesting 1947 EMC 350cc Mark I, manufactured by the Ehrlich Motor Co. at Park Royal, north-west London. The founder of the company, Dr Josef Ehrlich, fled to England in 1938 to escape the Nazis, bringing with him a Puch based split single two-stroke engine on which he had been working. This engine was to form the basis of the first machines to emerge from the new EMC factory some nine years later, development having been interrupted by the war. The split single was invented by Alberto Garelli in 1912 but very few home manufacturers picked up on the technology at the time and it was left to Puch to develop it further, which they did with some success, actually winning the German Grand Prix in 1931 with their version of the engine. At home, Trojan used a split single layout from 1913 in their two stroke motor car. Briefly, it uses two cylinders with two pistons sharing a common combustion chamber. Externally it looks like a single cylinder engine with one exhaust pipe, one carburettor and one spark plug. The split single system sends the intake fuel-air mixture up one bore to the combustion chamber, sweeping the exhaust gases down the other bore and out of the exposed exhaust port. The split single two-stroke thus delivers better economy than the common forms of two-stroke (and runs better at small throttle openings) at the cost of an engine that is heavier. The lubrication weaknesses of the two-stroke remain, as does most of the pollution. The problem of big-end lubrication in the EMC engine is dealt with by the provision of a pilgrim pump built into the chain case which delivers more oil when the engine was working hard than it does on a small throttle opening. The EMC frame is a neat duplex affair with a bolted-on backbone of manganese bronze which supported the steering head. Dowty Oleomatic front forks are employed, with a rigid rear end, although plunger rear suspension was offered from 1948. A Vincent type dual front brake was also part of the original spec, as was a four speed gearbox. Despite this up to date specification the new

marque‟s sales record in the UK was unimpressive, the oddball looks and the British motorcyclist‟s suspicion of new technology and two strokes in general meaning the EMC wasn‟t that favourably received. There was also an issue with pricing - at £191 it was £12 more than the highly respected Velocette KSS. The model did quite well in the export markets, however, with product-starved post war Europe taking fair numbers of the machines, but this wasn‟t enough, and by 1953 the lack of sales success meant the closure of the Park Royal factory. This wasn‟t the last we‟d hear of Dr Ehrlich, however. He went on to a career with De Havilland but kept his interest in bikes, and the EMC name reappeared on a 125 cc racing two stroke in the late nineteen fifties, ridden by some of the top riders of the day. Mike Hailwood even took one to third place in the 1961 125cc World Championship. Once more, EMC motorcycles faded from sight as Dr Joe busied himself designing and racing Formula Three cars, but in the eighties he was back on the motorcycle racing scene turning the Waddon Rotax machine into a race winner and taking the honours in four Lightweight TT races. In his later years Ehrlich was heavily involved in alternative engine technology, developing the „Environmental Engine‟ with variable compression and capacity, said to improve fuel economy and emissions. He died in 2003 aged 89 without ever seeing the engine adopted for commercial use. Our members can now see the EMC for themselves free of charge at the London Motorcycle Museum in Greenford.

London Motorcycle Museum founder Bill Crosby with the EMC 350, the latest addition to their display.

A Coventry to Brighton gallery

Bright and early on a gloomy Saturday in April Coventry‟s Millennium Place echoed to the sound of veteran, vintage and classic motorcycles and three wheelers, as the VMCC‟s annual Coventry to Brighton Run got under way from Coventry Transport Museum. Organised once again by the team of Ian and Kathy Alexander of the Warwickshire Section, the event this year enjoyed assistance from the BMCT as we sponsored the tea, coffee and bacon baps for the competing riders. Thus replete, some 74 entrants set off for Brighton via an interesting route, arriving in Brighton some hours later.

“The largest gathering of Veteran and Vintage machines in the world” is how the VMCC are billing this year‟s 61st Banbury Run, starting from the Heritage Motor Centre at Gaydon on Sunday 21st June 2009. Apart from the 600(!) entrants for the run there will be club stands and the Banbury Autojumble to interest the many spectators who flock to this event to see rare and sometimes unique bikes take part in the run which takes in some challenging roads in the north Cotswolds. There is a gentler route for older machines, and part of the fun is watching the intrepid riders take on the challenge of Sunrising Hill, a steep climb with a tricky right hander part of the way up. There is free parking near the start, with a shuttle bus into the site, and camping is available on Saturday night. For more details visit the website www.banbury-run.co.uk or contact the VMCC office on 01283 540557.

FESTIVAL OF 1,000 BIKES Following the success of last year when we demonstrated our Triumph Bandit, we will return to Mallory Park on July 11th - 12th to show off our stunning AJS S3 as restored by Sammy Miller. We hope to get to exercise the machine in the track sessions on Saturday, and John Kidson will be in the saddle for the Sunday morning session. Our tent will once again be in the Avenue of Clubs up by the hairpin, and we look forward to welcoming BMCT members old and new. For this year the VMCC‟s guest of honour will be Carl Fogarty, who will be entertaining spectators in

On Sunday the remaining participants reassembled in Brighton to receive their awards, before making their way home. Our photos show the first rider being flagged away by the Mayor of Coventry watched by BMCT Chairman Peter Wellings and Ian Alexander, and some of the interesting variety of machines taking part in this year‟s event.

STAFFORD SHOW There was mixed weather at the end of April for those who attended the Classic Motor Cycle Show at Stafford, but safe and dry inside the halls, the entrants in the classic concours event had no concerns. As usual there were some absolutely stunning machines to be seen, with the Best in Show award going to a 1911 Bradbury that looked as if it had rolled out of the showroom only yesterday. Other noteworthy bikes in the competition were a lovely water cooled SOS (below)

the Malmesbury Classic Motorcycle Club. Another BMCT member, Sammy Miller, had his customary clutch of machines on the Mortons Media stand, including the fantastic REG

£26,000 - £30,000) paid for a three-owner Vincent Black Shadow that had lain unused in a basement for nearly thirty years. Of the many Triumphs in the sale, possibly the nicest was a

that BMCT membership cards do not guarantee free entry to our affiliated museums when a special event is being held, for

250 (above) that has emerged from his workshops after restoration. The attention to detail on this machine has to be seen to be believed. Over in the Bonhams auction hall a marathon sale took place on Sunday afternoon, and against the current trend 88% of the lots found new that won an award for its lady homes – a quite remarkable owner, and a delightful 1914 result. Top price for a British Victoria, a 269 cc Villiers bike was the £47,700 (est. engined lightweight (right) that was one of the few makes to originate from Scotland, Glasgow to be precise. Second place in the vintage category went to BMCT member Richard Duffin‟s 1927 Scott Flying Squirrel, and the award for the best club stand went to

Gaydon. If in any doubt, please contact the museum concerned bef or ehand numbers

SAMMY’S LOWBOY NORTON FINISHED AT LAST Some while ago Sammy Miller was fortunate enough to acquire the 1959 Norton „Lowboy‟ from the late Bob Collier, who had obtained it when the Norton works at Bracebridge Street, Birmingham closed its doors in 1962. The machine was a product of the ingenuity of Doug Hele, and the objective was to lower drag and frontal area by lowering the bike as far as possible. Unfortunately the resulting riding position was very uncomfortable, the riders hated it, and the Lowboy was only raced a couple of times before being shelved. When the bike came to

Sammy it was in a poor state and missing its fairing, but it was rebuilt and joined the fantastic display in Sammy‟s „Norton Hall‟. Then, just recently Sam received a call from an enthusiast who had seen a photo of the lowboy and recognised the fairing as one that he had just bought in the Autojumble at Stafford Show! Needless to say, Sam jumped at the chance to buy the fairing and complete the unique machine which is now fully finished and on display at Sammy‟s museum in the New Forest.

Preserving the past...for the future

Who are we…? The British Motorcycle Charitable Trust was originally founded in 1979 as a means of raising funds to establish what was to become the National Motorcycle Museum at Bickenhill, near Birmingham. By 1995 the museum was well established as a successful commercial venture, and it and the charity became separate organisations. A new board of trustees was appointed to manage the assets of the BMCT as it pursues its objective to preserve and promote British motorcycle engineering heritage. Our funding comes from bequests, donations, membership fees and interest on our reserves. We have an expanding network of affiliated museums that we assist with projects, and we also own a growing collection of rare and unusual machines which can be seen on display at various locations throughout the country. Our members enjoy free entry to all our affiliated museums for the very reasonable sum of £20 a year. To enquire about membership or to find out about how you can help the trust through a donation or bequest, please contact Andy Bufton at the address on the left.

www.bmct.org SO WHAT BRITISH BIKES DO YOU OWN?

We‟d like to start a regular spot in the newsletter featuring the bikes owned by our members, so please send in your shots, by e-mail or post, and share your pride and joy with the rest of us. It doesn‟t have to be particularly rare or in concours condition, but if there‟s a story to tell about it then so much the better. Please send your photographs to Andy Bufton at the address above. Here‟s one to get us started….a proud owner and his 1953 Ariel KHA Twin. DATES FOR YOUR DIARY 21 June - VMCC Banbury Run Heritage Motor Centre, Gaydon 5 July - Anniversary Celebrations London Motorcycle Museum, Greenford 11-12 July - Festival of 1,000 Bikes Mallory Park, Leicestershire 18-19 July - Pageant of Power Cholmondeley Castle, Malpas, Cheshire 19 July - Speedway Day Sammy Miller Museum, New Milton 9 August - The Graham Walker Run National Motor Museum, Beaulieu 22-23 August - 50 Years of the Bonneville Heritage Motor Centre, Gaydon An early navigation system fitted to one of the competing machines on the Coventry to Brighton!