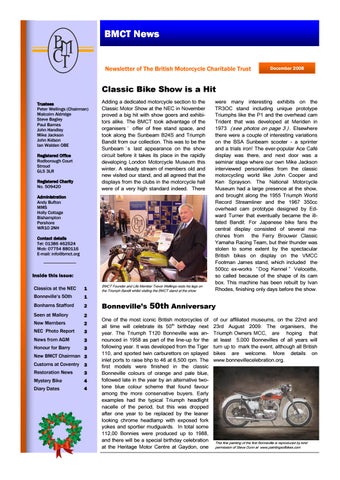 Adding a dedicated motorcycle section to the Classic Motor Show at the NEC in November proved a big hit with show goers and exhibitors alike. The BMCT took advantage of the organisers ’ offer of free stand space, and took along the Sunbeam B24S and Triumph Bandit from our collection. This was to be the Sunbeam ’ s last appearance on the show circuit before it takes its place in the rapidly developing London Motorcycle Museum this winter. A steady stream of members old and new visited our stand, and all agreed that the displays from the clubs in the motorcycle hall were of a very high standard indeed. There

Inside this issue: Classics at the NEC

were many interesting exhibits on the TR3OC stand including unique prototype Triumphs like the P1 and the overhead cam Trident that was developed at Meriden in 1973 ( see photos on page 3 ) . Elsewhere there were a couple of interesting variations on the BSA Sunbeam scooter - a sprinter and a trials iron! The ever-popular Ace Café display was there, and next door was a seminar stage where our own Mike Jackson interviewed personalities from the classic motorcycling world like John Cooper and Ken Sprayson. The National Motorcycle Museum had a large presence at the show, and brought along the 1955 Triumph World Record Streamliner and the 1967 350cc overhead cam prototype designed by Edward Turner that eventually became the illfated Bandit. For Japanese bike fans the central display consisted of several machines from the Ferry Brouwer Classic Yamaha Racing Team, but their thunder was stolen to some extent by the spectacular British bikes on display on the VMCC Footman James stand, which included the 500cc ex-works “ Dog Kennel ” Velocette, so called because of the shape of its cam box. This machine has been rebuilt by Ivan Rhodes, finishing only days before the show.

Bonneville’s 50th Anniversary One of the most iconic British motorcycles of all time will celebrate its 50th birthday next year. The Triumph T120 Bonneville was announced in 1958 as part of the line-up for the following year. It was developed from the Tiger 110, and sported twin carburettors on splayed inlet ports to raise bhp to 46 at 6,500 rpm. The first models were finished in the classic Bonneville colours of orange and pale blue, followed late in the year by an alternative twotone blue colour scheme that found favour among the more conservative buyers. Early examples had the typical Triumph headlight nacelle of the period, but this was dropped after one year to be replaced by the leaner looking chrome headlamp with exposed fork yokes and sportier mudguards. In total some 112,00 Bonnies were produced up to 1988, and there will be a special birthday celebration at the Heritage Motor Centre at Gaydon, one

of our affiliated museums, on the 22nd and 23rd August 2009. The organisers, the Triumph Owners MCC, are hoping that at least 5,000 Bonnevilles of all years will turn up to mark the event, although all British bikes are welcome. More details on www.bonnevillecelebration.org.

This fine painting of the first Bonneville is reproduced by kind permission of Steve Dunn at www.paintingsofbikes.com

“ t he bike is so original

Records were broken once more at Bonhams auction at the Stafford Classic Motorcycle Mechanics Show in October. Only a few weeks after a new world record price for a British bike at auction had been set by the ‘A’ Series Vincent-HRD at Bonhams Brian Verrall sale, another Vincent took top spot. The ex Reg Dearden supercharged Black Lightning (below) made an eye-watering £221,500 inclusive of buyer’s premium, raising the record by £6,700. The story of the bike is that Dearden, inspired by a prize of £500 being offered in 1949 by The Motor Cycle for the first successful all-British attempt on the World Speed Record, purchased the machine new

from the factory expressly for the purpose. The machine was subsequently returned to Stevenage for the fitting of a supercharger in 1950, a job personally overseen by Phil Irving, and one which demanded lengthening the frame by some six inches. By this time Dearden was busy running a number of Manx Norton road racers, and the project was put to one side. It was briefly resumed in 1953 when a record attempt was announced, with the nominated rider being Les Graham. Sadly Graham was killed in the 1953 Senior TT, and the project was abandoned. The bike lay unused at the back of Dearden’s premises until 1970, when it was sold to a publican friend of Reg. Eventually it found its way to America, where it was run a couple of times in the hands of two further owners, and the bike is so original it even wears the OE tyres that were fitted at Stevenage in 1949.

Another noteworthy result at the same auction was the sale of a 1902 Raleigh 2hp (below) which went for a whopping £29,900, three

times the sale estimate! This lovely bike had acquired a very nice patina since its restoration in 1947, and has been used on many Pioneer runs. Other results showed a softening in demand for the less unusual machines, and a number of Brough Superior and Vincent v-twins went unsold.

New Members We welcome the following new members and supporters of our Charity:

Spotted parked up in the Avenue of Clubs at the VMCC Festival of 1,000 Bikes was another bike with Reg Dearden connections, this very attractive ohc Reg Dearden Norton Special. Whether this was a one-off or part of a small run Deardens made of these bikes we aren’t sure, and the owner wasn’t around to ask. If any member has any information on this machine then please let us know and we’ll publish it in a future issue of BMCT News.

British ingenuity is alive and well! A V6 Triumph, no less

The Triumph P1, prototype of the Trident, from the London Motorcycle Museum

New member Robert Morgan signs up on the BMCT stand

Customs at Coventry The Coventry Transport Museum are staging a spectacular Custom Bike exhibition in the Ariel Gallery from 12th December to 22nd January. Modified machines of all types will be on display, so why not go along and take the chance to visit the BMCT display in the new Motorcycle Gallery at the same time?

News from the AGM

The Annual General Meeting of the BMCT was held in the Bettmann Suite of the Coventry Transport Museum on October 15th 2008. The meeting opened at 12.06 pm, the 2007 Annual Report and Accounts were discussed and approved, and the directors were authorised to settle the auditors’ remuneration. Messrs. Randall & Payne of Stroud were appointed as auditors for a further year, and Paul Barnes and Ian Walden, directors retiring by rotation, were re-elected. The members also voted in favour of Mike Jackson’s appointment to the board of trustees. John Kidson brought the members up to date with a summary of the charity’s activities since the end of the year, and opened the floor to discuss members’ observations. There was a discussion about the effect of the recession on the work of the charity, and Trevor Wellings suggested that all non-essential projects should be postponed until the situation improves, a view echoed by the majority present. John Kidson was thanked by all for his work as chairman, and there being no other business the meeting closed for lunch at 1.10 pm.

The board of trustees of the BMCT are pleased to announce that Peter Wellings has been elected chairman of the charity following John Kidson’s retirement from the role in October. Peter recently retired as proprietor of a print & design company and lives in Solihull. He has been a trustee of the BMCT since 1998, and has a wealth of experience in the world of business which will be of great help to us, given the current difficult financial climate. In taking over as chairman Peter paid tribute to the sterling work John Kidson has done for the Trust in his two spells in the chair over the last six years, and we are pleased to report that John has agreed to remain on the board as a trustee where his expertise and contacts will continue be of great value to us. As for himself, Peter is looking forward to the challenges ahead, and has agreed to remain in the chair for at least three years. New Chairman Peter Wellings

Work on the AJS S3 continues apace in Sammy Miller’s workshops at New Milton. A new final drive chaincase has been fabricated - a very skilled job and not for the faint hearted, according to Sammy - and the engine and gearbox have been stripped. New parts have been cast, including rear brake lever and centre stand, and a new kick start lever has had to be made since the original is unserviceable. Our photos below show the work in progress.

Barry Littlewood, a member and former trustee of the BMCT, has been awarded the MBE for services to Heritage. Until his retirement in 2007 Barry was Chief Executive of Coventry Transport Museum and with his team was responsible for transforming the museum into one of the West Midlands’ premier tourist attractions. Barry was presented with his honour by Her Majesty The Queen at an investiture ceremony held at Buckingham Palace earlier this year.

Barry Littlewood with his MBE

Preserving the past...for the future

Who are we…? The British Motorcycle Charitable Trust was originally founded in 1979 as a means of raising funds to build what subsequently became the National Motorcycle Museum at Bickenhill, near Birmingham. In 1995, once the museum had become established, it and the charity became separate organisations and a new board of trustees was appointed to manage the assets of the BMCT as it pursues its objective to preserve and promote British motorcycle engineering heritage. Our funding comes from bequests, membership fees, donations and interest on our reserves. We have an expanding network of affiliated museums who we assist with projects, and also own a growing collection of rare and unusual machines which can be seen on display at various locations throughout the country. Our members enjoy free entry to our affiliated museums for the very reasonable sum of £20 a year. To enquire about how you can help the trust through a donation, bequest or voluntary help, please contact Andy Bufton at the address on the left.

www.bmct.org Beaulieu Motorcycle World Cancelled Motorcycle World, one of the main events on the Beaulieu calendar, has been dropped from their 2009 schedule. The organisers cite the uncertain economic situation and the unwillingness of the motorcycle manufacturers to commit themselves to outdoor shows. The rising cost of complying with the dreaded Health & Safety regulations has been a major factor, as has the unpredictable weather which has had a drastic effect on attendances in the last two years. Beaulieu still remain committed to motorcycle preservation, and the major event for motorcyclists next year will be the annual Graham Walker Memorial Run on August 9th, for which they will be extending an invitation to classic bike owners to display their bikes in the grounds of the Museum.

Phil Wood is appealing for information about the bike pictured on the left. The magnificently moustachioed gentleman astride the machine is his grandfather, James Wood, who lived all his life in Walsall. Clues are that the bike was registered in Wolverhampton between 1925 and 1931, and that Phil ’ s grandfather died in 1928. Any ideas? Ivan Rhodes tells us that the Sunbeam in the last issue (below) is a 350 or 500 cc Sporting Model of a type introduced in 1924 for the 1925 model year. Ivan notes that this type had detachable front downtubes and there was no provision for a kickstart, so you had to be fairly fit - or live at the top of a steep hill!