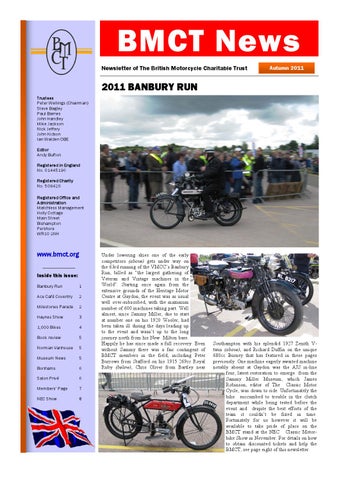 www.bmct.org Inside this issue: Banbury Run

Under lowering skies one of the early competitors (above) gets under way on the 63rd running of the VMCC‟s Banbury Run, billed as “the largest gathering of Veteran and Vintage machines in the World”. Starting once again from the extensive grounds of the Heritage Motor Centre at Gaydon, the event was as usual well over-subscribed, with the maximum number of 600 machines taking part. Well almost, since Sammy Miller, due to start at number one on his 1920 Wooler, had been taken ill during the days leading up to the event and wasn‟t up to the long journey north from his New Milton base. Happily he has since made a full recovery. Even without Sammy there was a fair contingent of BMCT members in the field, including Peter Burrows from Stafford on his 1915 269cc Royal Ruby (below), Chris Oliver from Bartley near

Southampton with his splendid 1927 Zenith Vtwin (above), and Richard Duffin on the unique 680cc Burney that has featured in these pages previously. One machine eagerly awaited machine notably absent at Gaydon was the AJS in-line four, latest restoration to emerge from the Sammy Miller Museum, which James Robinson, editor of The Classic Motor Cycle, was down to ride. Unfortunately the bike succumbed to trouble in the clutch department while being tested before the event and despite the best efforts of the team it couldn‟t be fixed in time. Fortunately for us however it will be available to take pride of place on the BMCT stand at the NEC Classic Motorbike Show in November. For details on how to obtain discounted tickets and help the BMCT, see page eight of this newsletter.

This summer, the Rockers returned as Coventry Transport Museum and Ace Café London presented a new exhibition telling the story of how a London transport cafe became an international icon, and how the café's customers redefined what it meant to be a teenager in the 1950s and 60s. Planned as a transport café for lorry drivers during the 1930s, the

Ace Café on London's North Circular Road quickly became a place where motorbike riders gathered. In the 1950s the Ace became the destination for a new breed of motorcycle riders; teenagers who met there to listen to rock 'n' roll, and to burn up the road doing “the ton”. They were daring and dangerous, and their lifestyle has influenced fashion, music

and motorbikes ever since. For “Coming of Age at the Ace Café”, the Ace as it was in the day is lovingly recreated inside the Museum, filled with bikes, clothes and stories from the 1950's and 60's. If you haven‟t seen it yet, don‟t worry, there‟s still time to catch this iconic exhibition inside Coventry Transport Museum before it closes on October 2nd.

MILESTONES OF THE MOUNTAIN TRIBUTE In June the Isle of Man celebrated 100 years of the Mountain Course with the “Milestones of the Mountain” parade lap. Among a host of star names BMCT members John Kidson and Ivan Rhodes were invited to take part by the organisers who were paying tribute to the riders and machines who had left their mark on TT history over the last century. John (right, at Bray Hill), mounted on Ivan Rhodes‟ ex works 495cc „Cammy‟ AJS R10, was representing Jimmy Simpson who set the first 50, 60 and 70 mph lap records around the circuit, and Ivan himself (left, at Creg-ny-Baa) was playing the part of Stanley Woods, winner of 10 TT races between 1923 and 1939. Ivan was mounted on the same 1937 works 500 Velocette that Woods himself rode in the TT parade laps from 1979 to 1983.

Other attractions at Sparkford included a ‘Drift Car’ demonstration (below) The Haynes Motor Museum at Sparkford held their first annual Motorcycle Show at the museum in August. Timed to coincide with the second annual Jeff Clew Run which starts from the museum car park, the show offered enthusiasts the chance to partake of Ducati test rides, a wheelie machine, drift car and Dream Car rides and watch a stunning display of stunt riding. If that wasn‟t enough excitement there were also the thrills and spills of the Wall of Death to take in as well. Local groups such as Bikesafe, RoSPA and the Freewheelers also had stands, and the BMCT were represented with an exhibition featuring our 1937 Brough Superior SS80 (above)

which normally resides inside the museum. The Jeff Clew Run, organised by the Dorset Section of the VMCC in memory of the well-known rider, writer and motorcycle historian, attracted an entry of 82 machines, whose riders tackled either a thirty or seventy mile route, starting in the car park at 11 am and ending up back at the museum for well-earned rest and refreshments in the afternoon. Our photo above shows riders assembling and preparing for the start of the Run, which thankfully took place under (mostly) clear and sunny skies. On the BMCT stand we were pleased to meet many of our members and enrol some new ones too.

FESTIVAL OF 1,000 BIKES IN PICTURES The 2011 VMCC Festival of 1,000 Bikes at Mallory Park was another great success for the club with huge crowds attending over the weekend. These photos show just a sample of what was on offer. Getting down to it on a Coventry Eagle

Ariel 3 out-dragging Triumph from the hairpin…?

Amongst the moderns was this new Norton Commando

Our stand in the Avenue of Clubs was busy as usual

A nice New Hudson V-twin on a club stand

“British Motorcycles of the 1960s and 70s” by Mick Walker

Shire Library have recently published a companion volume to Mick Walker‟s “British Motorcycles of the 1940s and „50s” which came out last year. The new volume picks up where the last one left off, and covers the boom years of the early sixties through the decline and fall of the British motorcycle industry in the nineteen seventies. Both volumes are in 64 page softback A5 format, and are clearly not intended as major reference works, but are instead very readable accounts of what was happening in the industry during those periods. The later volume covers the Café Racer culture, the rise of the Japanese factories, the dawn of the superbike and the importance to British manufacturers of the American market. There are suggestions for further reading for those who want to delve into the subject in greater depth. Both volumes available now at £6.99 each from Shire Publications, West Way, Botley, Oxford OX2 0PH

Born in 1916, Norman spent 35 years in motor cycle competitions and experimental departments before joining BSA in 1952 as a sales representative. Throughout his life, Norman was a significant competitor in motorcycle sporting events winning over 150 awards, notably for hill climbs and trials. But perhaps his greatest claim to fame was being part of the 1952 International Six Days Trial team that won both the Team Award and captured the coveted Maudes Trophy. Riding 4500 miles from Birmingham to Vienna, then through Germany, Denmark, Sweden and Norway, the 500cc BSA A7 team -which included Brian Martin and Fred Rist - put on a faultless performance and returned safely to Birmingham, thereby securing the Val Page, Herbert Perkins and David Munro-designed parallel twins' reputation as a competent, reliable, all-weather tourer. Norman, who had seen active service with the British Army riding (notably) BSA M20s, later published a book entitled “BSA Competition History”, a down-to-earth, amusing and highly insightful book that's still available today. - from “Sump” August 2011

MUSEUM NEWS HAYNES INTERNATIONAL MOTOR MUSEUM have announced a major new £3.4 million museum redevelopment project (see below) which will start in September 2011. The entire museum frontage will be replaced with new entrance, gift shop and restaurant as well as more exhibition space and improved visitor facilities. The museum

will be open throughout the build and everything possible will be done to keep the disruption to a minimum however some minor disruption is envisaged. Haynes advise visitors to contact them on 01963 440804 if they have any major concerns about which facilities and displays will be available during their visit.

Stafford this autumn. Estimate is £3,000 - £4,000. Also on offer will be the bike that was once purported to be “the fastest privately owned

motorcycle in the World suitable for road use”, the 1929 Brough Superior SS100 „Moby Dick‟. Tested by a magazine in 1931 it achieved a top speed of 106 mph, remarkable in an age when few vehicles of any kind could reach three figure speeds. Further tuning to the 1142cc JAP motor increased the maximum to 115 mph, with 109 available in second gear of the three-speed „box. Bonhams presale estimate is £240,000 to £250,000. Also on offer is Phil Pike‟s 1926 Maudes Trophy-winning 588cc ohv Norton (est. £28,000£30,000) which helped the Birmingham factory to win the prestigious award for the fourth consecutive year. The sale is on 16th October.

More from the Salon Privé Concours at Syon Park in July

the Duke and Duchess of Northumberland. Spectators stopped in their tracks when Sam fired up the mighty supercharged V4 to ride onto the red carpet where the panel of judges waited give their opinion on the

magnificent array of cars and bikes. Behind Sammy in the photo above is another example of AJS ingenuity, the E95 Porcupine, being shown before its shipment to California where it later failed to sell at auction.

NEW MEMBERS We welcome the following new members and supporters of our cause:

The 1956 BSA C12 above is owned by member no. A439, J M Atkinson from West Canford Heath, near Poole. Remarkably the bike has had only one other owner since new and until recently

had been off the road for some 25 years. A retired carpenter, Mr. Atkinson now has his sights set on obtaining a 1947 Matchless of the type he rode in the nineteen fifties and which never let him down.

IS THIS A FACTORY EXPERIMENTAL BSA ?

John Walters (A193) sends this photo of his 1960 BSA A10 Super Rocket which has a very interesting early history. The bike was first registered to BSA at Armoury Road, and was owned by them for just over a year before being sold on. The original buff log book is in John‟s possession and shows that this particular A10 was built using an A7 frame, and other cycle parts that were to be used in a later model to emerge from the factory the Rocket Gold Star. The gearbox is an RRT2,

the front and rear brakes are Gold Star items, and when John stripped the engine he found that the internals had been highly polished, all of which points to this bike being an early RGS prototype, built following the suggestion by Eddie Dow to the BSA factory in 1959 that such a model would be a good seller. John is keen to find out more about this bike - reg. number 797 BOF. Anyone with information can contact him through Andy Bufton at the BMCT office address.

NEC CLASSIC SHOW TICKETS - SPECIAL OFFER FOR MEMBERS Tickets are now on sale for this year‟s Classic Motorbike Show at Birmingham‟s National Exhibition Centre. Run once again in conjunction with the Classic Motor Show, the event dates are 11, 12 and 13 November. See page 8 for details of how ordering your tickets in advance can help you and benefit the BMCT.