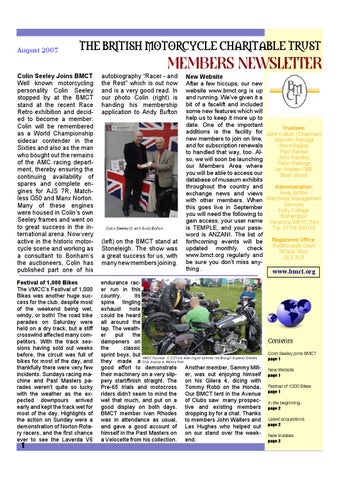 Colin Seeley Joins BMCT Well known motorcycling personality Colin Seeley stopped by at the BMCT stand at the recent Race Retro exhibition and decided to become a member. Colin will be remembered as a World Championship sidecar contender in the Sixties and also as the man who bought out the remains of the AMC racing department, thereby ensuring the continuing availability of spares and complete engines for AJS 7R, Matchless G50 and Manx Norton. Many of these engines were housed in Colin’s own Seeley frames and went on to great success in the international arena. Now very active in the historic motorcycle scene and working as a consultant to Bonham’s the auctioneers, Colin has published part one of his

autobiography “Racer - and the Rest” which is out now and is a very good read. In our photo Colin (right) is handing his membership application to Andy Bufton

Festival of 1,000 Bikes The VMCC’s Festival of 1,000 Bikes was another huge success for the club, despite most of the weekend being wet, windy, or both! The road bike parades on Saturday were held on a dry track, but a stiff crosswind affected many competitors. With the track sessions having sold out weeks before, the circuit was full of bikes for most of the day, and thankfully there were very few incidents. Sundays racing machine and Past Masters parades weren’t quite so lucky with the weather as the expected downpours arrived early and kept the track wet for most of the day. Highlights of the action on Sunday were a demonstration of Norton Rotary racers, and the first chance ever to see the Laverda V6

endurance racer run in this country. Its spine tingling exhaust note could be heard all around the lap. The weather put the dampeners on the classic sprint boys, but VMCC Founder C E (Titch) Allen (right) admires the Brough Superior Owners they made a Club display at Mallory Park good effort to demonstrate Another member, Sammy Milltheir machinery on a very slip- er, was out enjoying himself pery start/finish straight. The on his Gilera 4, dicing with Pre-65 trials and motocross Tommy Robb on the Honda. riders didn’t seem to mind the Our BMCT tent in the Avenue wet that much, and put on a of Clubs saw many prospecgood display on both days. tive and existing members BMCT member Ivan Rhodes dropping by for a chat. Thanks was in attendance as usual, to members John Walters and and gave a good account of Les Hughes who helped out himself in the Past Masters on on our stand over the weeka Velocette from his collection. end.

(left) on the BMCT stand at Stoneleigh. The show was a great success for us, with many new members joining.

New Website After a few hiccups, our new website www.bmct.org is up and running. We’ve given it a bit of a facelift and included some new features which will help us to keep it more up to date. One of the important Trustees: additions is the facility for John Kidson (Chairman) new members to join on line, Malcolm Aldridge and for subscription renewals Steve Bagley Paul Barnes to handled that way, too. AlJohn Handley so, we will soon be launching Peter Wellings our Members Area where Ian Walden OBE you will be able to access our Brian Wood database of museum exhibits throughout the country and Administration: Andy Bufton exchange news and views with other members. When Matchless Management Services this goes live in September Holly Cottage you will need the following to Bishampton gain access; your user name Pershore WR10 2NH is TEMPLE, and your passTel: 07754 880116 word is ANZANI. The list of Registered Office: forthcoming events will be Rodborough Court updated monthly, check Stroud, Glos. www.bmct.org regularly and GL5 3LR be sure you don’t miss anything . www.bmct.org

In the beginning... We are frequently asked how the BMCT came into being, and how it is funded. Founder and Life Member Trevor Wellings gives this thumbnail answer for this newsletter and may one day elaborate in his memoirs. Fifty five years ago Trevor, an accountant, and his client Roy Richards, a builder, came together to start a venture in the plant hire and construction industry. The company became very successful, and enabled Mr Richards to indulge his hobby of acquiring and restoring British motorcycles. In the early eighties he and Trevor were even asked to consider taking over Triumph Motorcycles, but the decision they came to was that the company was already beyond help.

bankers, tourist boards, local authorities, business connections, donations and grants. Raffles were held, and “buy a brick” schemes all helped to swell the fund to over £1m. Mr Richards himself contributed millions to the project, plus his own private collection of bikes. Early on it was clear that a museum could not support itself, so two thirds of the site was given over to conference and banqueting facilities, the resulting profits helping to sustain the museum. In 1984 the culmination of everyone’s efforts came with the opening by Geoff Duke of the National Motor Cycle Museum in 1984.

Having established a Charity Company, an attempt was made to establish a museum on land at Meriden, but this did not transpire. Eventually a site was identified - a derelict former transport café at Bickenhill, near Solihull - and work commenced on the building of the National Motor Cycle Museum. Money was raised from appeals to

Profits from the commercial trading company allowed another 300 bikes to be added to the display between 1984 and 1995. At this point Mr Richards and the Charity Commission began to disagree over the direction the museum was taking, and after prolonged legal activity our Charity had to sell back the museum property and most of the collection into his private ownership. All was not lost however and with guidance from the Commission and retention of around £1.2m of public money Trevor led a new board of trustees to develop our present affilia-

Latest acquisitions In recent months we been active in securing the future of some interesting machines. A 1934 Scott Flying Squirrel has joined our collection, and is remarkable in having been owned by the same family since 1934! Currently undergoing recommissioning, this bike will be seen out and about at the events the BMCT are attending this year. Also on its way is a Beardmore Precision (right), an interesting Kings

Norton made machine with a 500 cc side valve JAP engine, unit construction and leaf-sprung front forks. This bike will be part of the display at the ever-improving London Motorcycle Museum at Greenford, Middlesex. Also under restoration and due to make its appearance at Coventry Transport Museum soon is a rare variant of the pre-war Triumph Tiger 80. Check the progress of these bikes at www.bmct.org

New Trustees Following the retirement of Barry Littlewood, the Charity has strengthened the board of trustees with the election of two new members – John Handley and Steve Bagley (right). John is from Knowle and has spent his working life in the world of commerce and brings with him great experience and many contacts who will be of great value to the Trust in the coming years. Steve, a resident of Coventry, may already be known to some of our members as the Principal Curator of Coventry Transport Museum. He has a great depth of knowledge on historic transport related issues and will be able to advise the board from the museum curator’s perspective. These additions bring the number of board members back up to eight. At their last meeting the board expressed their gratitude for the work done by Barry Littlewood in his time as a trustee, and wished him a happy retirement. These latest additions to the board will be ratified at the next AGM in October.

tion with other transport museums (now 10) displaying and preservation policies outlined in our annual report , ever mindful of our need to emphasise the British heritage for the benefit and education of the public. The trust is administered by a board of eight trustees under the chairmanship of John Kidson who meet on a quarterly basis to consider issues such as buying machines for display, grants for museums, investment strategy and so on. Our investments provide the income to support our activities. The trust is administered on a day to day basis by Andy Bufton, assisted at events by willing volunteers from our membership. In the meantime, as is well known, the NMCM suffered a catastrophic fire which destroyed a large part of the collection. Many men would have cried enough at this point, but Roy Richards and his staff made a superhuman effort which resulted in the reopening of the museum only one year later, better than ever. Once again our members can enjoy free access to what is the finest collection of British motorcycles in the world.

John Kidson (r) hands over the Beardmore to Bill Crosby, Founder of the London Motorcycle Museum