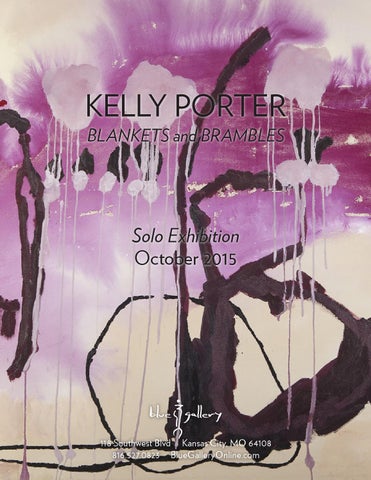 Kelly Porter in her studio

Blue Gallery is pleased to announce a solo exhibition of recent works by contemporary visual artist Kelly Porter. We will hold an artist talk and opening reception Thursday evening, October 1 from 6 to 9pm, with 30 percent of the proceeds being donated during the entire month to the Rose Brooks Center, Kansas City’s domestic violence shelter. In this exhibition, Kelly Porter introduces large-scale paintings and works on paper that focus on the process of abstraction and conceptualization of depth beyond formal composition. The impetus is the budding beauty of cellular and botanical life, which then enters the autonomous world of the paintings themselves. Pathological forms resembling flora drive the artist into exploration and wonder of how life organizes itself from its earliest inception: from circle to structure, pattern, grid. This organic behavior reveals a subconscious vernacular which speaks to history, comfort, conflict and the human condition. The work is emotional, primal and intuitive. Porter cherishes the raw, unobstructed and uninhibited gesture in the act of painting. Beckoning primitive nuances, her patterning and mark-making call forth ideas about documenting one’s existence. A sort of ceremonial repetition is evident in the simple marks that are expressed throughout the images. The very act of this mark-making is rhythmic and represents the passing of time. Executed in lyrical fashion, Porter’s process is physical and vivacious, adding and subtracting the paintings into their final stages. The result is a body of passionate work that is alive and full of energy, inviting the viewer into a world of playfulness, experimentation and game. About Kelly Porter Kelly Porter is from Dallas, TX. She received her BFA from Kansas City Art Institute, Kansas City, MO in 1997, where she studied printmaking and philosophy. Upon receiving a full scholarship, she continued her education at the State University of New York in Buffalo, NY, where she received an MFA in 1999. Porter returned to Kansas City for a teaching position at the Kansas City Art Institute and began showing her work in galleries across the country. Kelly Porter’s work has been described by critics as “unique, composed and calming, with layered and labor intensive surfaces.” As a full time professional artist, Porter has simultaneously produced work for multiple solo exhibitions, as well as creating and running the successful textile and wall covering company, Porter Teleo. Her honors include being named as one of the “21 Under 30 Top Artists to Watch” in 2004 by Southwest-Art Magazine, “Top Visual Artist” in 2006 by Kansas City Magazine, a “Merit Award for Best Product Design” from Interior Design Magazine, 2008, and a number of editorials in Architectural Digest, Elle Décor, Vogue, Town and Country, Women’s Wear Daily, Veranda, Metropolitan Home, House Beautiful and Spaces Kansas City for her surface design work for Porter Teleo. Kelly Porter’s personal contemporary artwork can be seen in private and corporate collections nationwide, including: Poetry and Rare Books Collection of New York, NY, Utilicorp, KC, MO, Sprint Corporate Collection, Overland Park, KS, Brandmeyer Enterprises, LLC, Leawood, KS, Shook Hardy and Bacon, KC, MO, Houlihan’s Restaurant Corp, Chicago, IL, American Century, KC, MO, and other public spaces including New York Fashion Week VIP Lounge, the Greenville Symphony Auditorium and the New York Palace Hotel Lobby. She has received numerous accolades in the art and design community and was recently honored as a guest speaker at the Creative Leadership Symposium through Hallmark, KC, MO. Porter lives and works in Kansas City. She has been represented by Blue Gallery in the Kansas City Crossroads Arts Districts since 2000. About Blue Gallery In business for 15 years, Blue Gallery is a popular and respected fixture of Kansas City’s lively art scene. Its underlying philosophy reminds visitors of the owners Kelly and David Kuhn’s genuine commitment to the arts: they treat art and beauty as fundamental elements of life, and instill this mood into their gallery. But what has set Blue Gallery apart, is the way Kelly and David conduct their business behind the art. “We work with our artists with the same tenants as our collectors: integrity, passion, and obsession with quality in every decision we make,” says Kelly. “A philosophy that is the result of over 23 years working with professional artists and collectors. Over all, David and I are committed to providing an inspired and profound experience that is inclusive and transformative.” Established in 2000 at the center of Kansas City’s Crossroads Arts District, Blue Gallery represents 40+ emerging to established local, regional and nationally known artists, with works placed in private and public collections worldwide. Blue Gallery holds several exhibitions a year, as well as participates in First Fridays, held exclusively in the Crossroads Arts District monthly. Blue Gallery is considered one of the premier galleries in Kansas City having won numerous awards including KC Magazine’s Best Private Art Gallery in 2002, 2004, 2005, 2006, and 2007, and Ingram’s Magazine Bronze for Best Museum or Art Gallery in 2004, 2005, and 2007. And 435 Magazine’s Best Local Art Gallery in 2015. 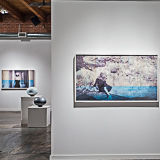