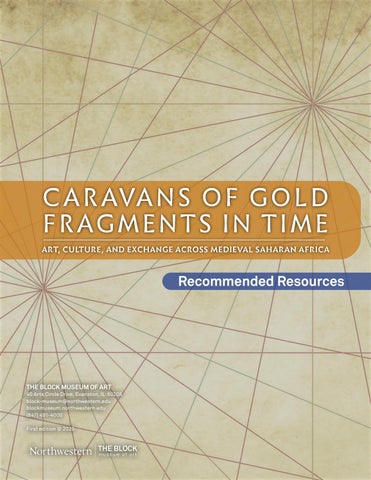 RESOURCES SPECIFICALLY DEVELOPED FOR CARAVANS OF GOLD Scholarly publication www.blockmuseum.northwestern.edu/publications/caravans-of-gold,-fragments-in-time.html The exhibition was accompanied by a scholarly publication co-published by The Block Museum of Art and Princeton University Press. The publication draws on emerging research from disciplines including archaeology, art history, comparative literature, history, and material science to construct a compelling look at medieval trans-Saharan exchange and its legacy. Contributors present case studies that form a rich portrayal of a distant time.

Progressive website https://caravans.library.northwestern.edu/ The Caravans of Gold progressive website presents a condensed digital version of the exhibition and highlights some of the important objects featured in it. Users can explore themes or key artworks from the exhibition. The app was conceived in collaboration with undergraduates at Northwestern University in a course taught by the exhibition’s curator, Kathleen Bickford Berzock, and developed through a partnership between The Block Museum of Art and Northwestern Libraries.

WEB RESOURCES AfricaMap, Harvard University http://worldmap.harvard.edu/africamap/ Harvard created this dynamic map of the continent that allows you to select different layers of information, including delineations of empires and polities in different periods in world history, demographics including religion and language, and more.

Exploring Africa, African Studies Center, Michigan State University http://exploringafrica.matrix.msu.edu/ This educational project from the African Studies Center at Michigan State University includes a map, short texts about each empire, and graphic organizers to prompt students to apply what they’ve learned about them. The module History of Africa During the Time of the Great West African Kingdoms has a number of lessons that link to the themes in Caravans of Gold.

Heilbrunn Timeline of Art History, Metropolitan Museum of Art www.metmuseum.org/toah/ Through essays, works of art, and chronologies, this resource provides historical overviews and art objects that align with Caravans of Gold. Search these resources related to the museum’s global collection by time period and region. Particularly relevant essays include “Trans-Saharan Gold Trade (7th–14th Century)” and “Trade and the Spread of Islam in Africa.”

2 THE BLOCK MUSEUM OF ART

A History of the World in 100 Objects, BBC and The British Museum www.bbc.co.uk/ahistoryoftheworld/about/british-museum-objects/ This audiovisual series in one hundred parts was also a book by Neil MacGregor, former director of the British Museum. It provides detailed pages of 100 objects through which you can explore world history from two million years ago to the present. The companion website allows you to explore objects by broad themes or by geographic regions. The following objects align with Caravans of Gold in different ways: • This Ife head, like the seated figure found at Tada, Nigeria, and featured in Caravans of Gold, is an artwork created in the West African kingdom of Ife. • Kilwa pot sherds, while from a different region on the continent, tell a similar story of trade, exchange, and movement in medieval Africa. • This gold coin of Abd al-Malik was one of the first coins to contain words from the Qur’an rather than the image of a ruler.

Teaching History with 100 Objects, The British Museum www.teachinghistory100.org/ This website for teachers and students features classroom-ready teaching ideas. Two fascinating object lessons on this website complement the stories of Caravans of Gold: • This salt cellar from Benin, like many objects in Caravans of Gold, allows us to learn about exchanges between West Africa and Europe in the medieval era. • Caravans of Gold explores a moment in history before trans-Atlantic slave trade. This Akan drum speaks specifically to this later slave trade, charting a story of a journey from West Africa to America and then to England.

Resources for Teaching a Global Middle Ages, International Center of Medieval Art www.medievalart.org/teaching-a-global-middle-ages This website includes resources on teaching a more inclusive history of medieval art. Its bibliography is divided into geographic headings as well as larger themes such as “Exchange, Trade Routes, Materials, and Currency.”

“I Didn’t Know There Were Cities in Africa!” Teaching Tolerance www.tolerance.org/magazine/fall-2008/i-didnt-know-there-were-cities-in-africa This resource offers an entry point for teaching with Africa by exploring students’ possible misperceptions of the continent.

“What’s the Real Size of Africa?” CNN www.cnn.com/2016/08/18/africa/real-size-of-africa/index.html In this CNN article, your students can see firsthand some of the distortions of Africa that common map projections perpetuate.

4 THE BLOCK MUSEUM OF ART

VIDEOS Africa’s Great Civilizations, PBS www.pbs.org/weta/africas-great-civilizations/home/ In his series, Africa’s Great Civilizations, Henry Louis Gates, Jr. explores the history of Africa through two hundred thousand years of history. Part 3, “Empires of Gold,” describes the trans-Saharan trade, including the exchange of salt for gold, the rise of the Empire of Mali and Timbuktu as an important center of learning, and kingdoms of Ile Ife. Additional web resources include videos from the series, image galleries, maps, and classroom lessons.

Lost Kingdoms of Africa, BBC Four www.bbc.co.uk/programmes/b01bgnb1 Hosted by Dr. Gus Casely-Hayford, this series explores the pre-colonial history of some of Africa’s most important kingdoms.

Mansa Musa and Islam in Africa, Crash Course World History, WTTW https://illinois.pbslearningmedia.org/resource/67ed6205-c647-48eb-b53d-b10cff939bb9/mansamusa-and-islam-in-africa-crash-course-world-history-16/ Episode sixteen of John Green’s popular and accessible Crash Course series provides an overview of the kingdom of Mali, Saharan trade, Mansa Musa’s pilgrimage (hajj) to Mecca, and Ibn Battuta’s travels. He addresses West Africa’s connections to North Africa, Europe, and Asia; gold as a driving force of trade; and the crucial role of Islam in facilitating trade and the spread of Islam. Many good viewer’s guides are available for this video on the web, and PBS Learning Media offers connections to National Standards for History.

“The Danger of a Single Story,” Chimamanda Ngozi Adichie, TEDGlobal 2009 www.ted.com/talks/chimamanda_adichie_the_danger_of_a_single_story Adichie’s talk is a wonderful, thought-provoking explication of the dangers of stereotyping and the powerful ways that narratives shape our perception and understanding of people and the world. An essential resource for any unit that concerns stereotypes and challenging perceptions but particularly apropos for teaching African history. Caravans of Gold does important work disrupting a single story of Africa by illuminating Africa’s vibrant but little-known medieval past.

“The Powerful Stories that Shaped Africa,” Gus Casely-Hayford, TEDGlobal 2017 www.ted.com/talks/gus_casely_hayford_the_powerful_stories_that_shaped_africa Casely-Hayford discusses the importance Africans have placed on preserving the stories of their past, with ordinary Africans “making a stand for their story, for their history.” As he says, “History matters. History really matters. And for peoples of African descent who have seen their narratives systematically assaulted over centuries, this is critically important.” About the eight-minute mark, Casely-Hayford discusses Mansa Sunjata Keita, the founder of the medieval empire of Mali, and the importance of oral history to that kingdom and its legacy today as well as Mansa Musa, his hajj, and the building of the great mosque and libraries in Timbuktu.

6 THE BLOCK MUSEUM OF ART 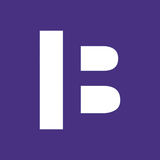 The Block Museum of Art has developed a Teacher’s Guide and compiled a list of Recommended Resources to help educators teach with key works...

The Block Museum of Art has developed a Teacher’s Guide and compiled a list of Recommended Resources to help educators teach with key works...