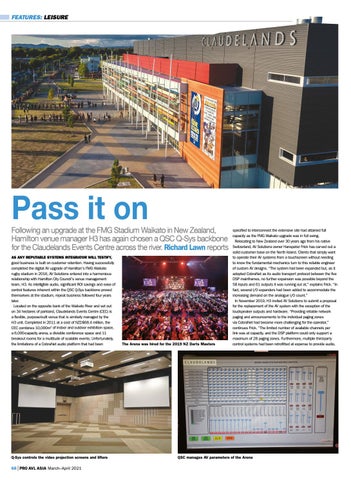 Following an upgrade at the FMG Stadium Waikato in New Zealand, Hamilton venue manager H3 has again chosen a QSC Q-Sys backbone for the Claudelands Events Centre across the river. Richard Lawn reports AS ANY REPUTABLE SYSTEMS INTEGRATOR WILL TESTIFY, good business is built on customer retention. Having successfully completed the digital AV upgrade of Hamilton’s FMG Waikato rugby stadium in 2016, AV Solutions entered into a harmonious relationship with Hamilton City Council’s venue management team, H3. As intelligible audio, significant ROI savings and ease of control features inherent within the QSC Q-Sys backbone proved themselves at the stadium, repeat business followed four years later. Located on the opposite bank of the Waikato River and set out on 34 hectares of parkland, Claudelands Events Centre (CEC) is a flexible, purpose-built venue that is similarly managed by the H3 unit. Completed in 2011 at a cost of NZD$68.4 million, the CEC combines 10,000m2 of indoor and outdoor exhibition space, a 6,000-capacity arena, a divisible conference space and 11 breakout rooms for a multitude of scalable events. Unfortunately, the limitations of a CobraNet audio platform that had been

The Arena was hired for the 2019 NZ Darts Masters

specified to interconnect the extensive site had attained full capacity as the FMG Waikato upgrade was in full swing. Relocating to New Zealand over 30 years ago from his native Switzerland, AV Solutions owner Hanspeter Frick has carved out a solid customer base on the North Island. Clients that simply want to operate their AV systems from a touchscreen without needing to know the fundamental mechanics turn to this reliable engineer of custom AV designs. “The system had been expanded but, as it adopted CobraNet as its audio transport protocol between the five DSP mainframes, no further expansion was possible beyond the 58 inputs and 61 outputs it was running out at,” explains Frick. “In fact, several I/O expanders had been added to accommodate the increasing demand on the analogue I/O count.” In November 2019, H3 invited AV Solutions to submit a proposal for the replacement of the AV system with the exception of the loudspeaker outputs and hardware. “Providing reliable network paging and announcements to the individual paging zones via CobraNet had become more challenging for the operator,” continues Frick. “The limited number of available channels per link was at capacity, and the DSP platform could only support a maximum of 28 paging zones. Furthermore, multiple third-party control systems had been retrofitted at expense to provide audio, 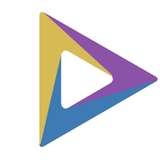