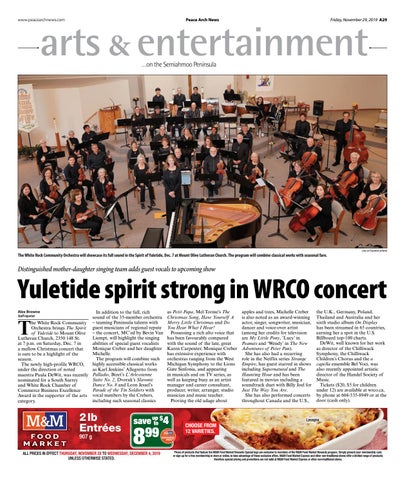 …on the Semiahmoo Peninsula

The White Rock Community Orchestra will showcase its full sound in the Spirit of Yuletide, Dec. 7 at Mount Olive Lutheran Church. The program will combine classical works with seasonal fare.

In addition to the full, rich sound of the 35-member orchestra he White Rock Community – teaming Peninsula talents with Orchestra brings The Spirit guest musicians of regional repute of Yuletide to Mount Olive – the concert, MC’ed by Bevin Van Liempt, will highlight the singing Lutheran Church, 2350 148 St. abilities of special guest vocalists at 7 p.m. on Saturday, Dec. 7 in Monique Creber and her daughter a mellow Christmas concert that Michelle. is sure to be a highlight of the The program will combine such season. highly accessible classical works The newly high-profile WRCO, as Karl Jenkins’ Allegretto from under the direction of noted maestra Paula DeWit, was recently Palladio, Bizet’s L’Arlessienne Suite No. 2, Dvorak’s Slavonic nominated for a South Surrey Dance No. 8 and Leon Jessel’s and White Rock Chamber of Parade of the Tin Soldiers with Commerce Business Excellence Award in the supporter of the arts vocal numbers by the Crebers, including such seasonal classics category.

as Petit Papa, Mel Torme’s The Christmas Song, Have Yourself A Merry Little Christmas and Do You Hear What I Hear? Possessing a rich alto voice that has been favourably compared with the sound of the late, great Karen Carpenter, Monique Creber has extensive experience with orchestras ranging from the West Michigan Symphony to the Lions Gate Sinfonia, and appearing in musicals and on TV series, as well as keeping busy as an artist manager and career consultant, producer, writer, arranger, studio musician and music teacher. Proving the old adage about

ALL PRICES IN EFFECT THURSDAY, NOVEMBER 28 TO WEDNESDAY, DECEMBER 4, 2019 UNLESS OTHERWISE STATED.

apples and trees, Michelle Creber is also noted as an award-winning actor, singer, songwriter, musician, dancer and voice-over artist (among her credits for television are My Little Pony, ‘Lucy’ in Peanuts and ‘Wendy’ in The New Adventures of Peter Pan). She has also had a recurring role in the Netflix series Strange Empire, has guest starred in shows including Supernatural and The Haunting Hour and has been featured in movies including a soundtrack duet with Billy Joel for Just The Way You Are. She has also performed concerts throughout Canada and the U.S.,

the U.K., Germany, Poland, Thailand and Australia and her sixth studio album On Display has been streamed in 65 countries, earning her a spot in the U.S. Billboard top-100 charts. DeWit, well known for her work as director of the Chilliwack Symphony, the Chilliwack Children’s Chorus and the a capella ensemble Bel Voci, was also recently appointed artistic director of the Handel Society of Music. Tickets ($20, $5 for children under 12) are available at wrco.ca, by phone at 604-535-8949 or at the door (cash only).