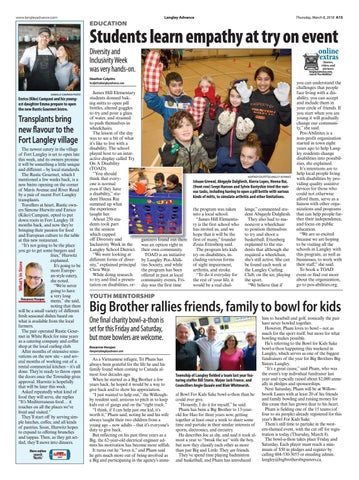 The newest eatery in the village of Fort Langley is set to open late this week, and its owners promise it will be something a little unique and different – by local standards. The Rustic Gourmet, which I mentioned a few weeks back, is a new bistro opening on the corner of Mavis Avenue and River Road by a pair of recent Fort Langley transplants. Travellers at heart, Rustic owners Simone Hurwitz and Enrico (Kiko) Campani, opted to put down roots in Fort Langley 18 months back, and now they’re bringing their passion for food and European culture to the table at this new restaurant. “It’s not going to be the place you go to get some burgers and fries,” Hurwitz explained. It’s going to be more European-style eatery, she noted. “We’re never going to have a very long Roxanne Hooper menu,” she said, noting that there will be a small variety of different fresh seasonal dishes based on what is available from the local farmers. The pair operated Rustic Gourmet in White Rock for nine years as a catering company and coffee shop at the local curling club. After months of extensive renovations on the new site – and several months of working out of a rental commercial kitchen – it’s all done. They’re ready to throw open the doors once the Township gives approval. Hurwitz is hopefully that will be later this week. Asked repeatedly what kind of food they will serve, she replies “It’s Mediterranean food… it touches on all the places we’ve lived and visited.” They’ll start off by serving simple lunches, coffee, and all kinds of pastries. Soon, Hurwitz hopes to expand to offering brunches and tappas. Then, as they get settled, they’ll move into dinners. More online search ‘Rustic’

James Hill Elementary students donned baking mitts to open pill bottles, altered goggles to try and pour a glass of water, and strained to push themselves in wheelchairs. The lesson of the day was to see a bit of what it’s like to live with a disability. The school played host to an interactive display called Try On A Disability (TOAD). “You should think that everyone is normal even if they have a disability,” student Heena Rai summed up what the experience taught her. About 250 students took part in the session which capped off Diversity and Inclusivity Week in the Langley School District. “We were looking at different forms of diversity,” explained principal Chris Wejr. While doing research to try and find a presentation on disabilities, or-

ganizers found out there was an option right in their own community. TOAD is an initiative by Langley Pos-Abilities Society, and while the program has been offered in past at local community events, Friday was the first time

the program was taken into a local school. “James Hill Elementary is the first school who has invited us, and we hope that it will be the first of many,” founder Zosia Ettenberg said. The program lets kids try on disabilities, including various forms of sight impairment, arthritis, and stroke. “To do it everyday for the rest of your life, it would be a real chal-

lenge,” commented student Abigayle Dalgliesh. They also had to manoeuvre a wheelchair to position themselves to try and shoot a basketball. Ettenberg explained to the students that although she required a wheelchair, she’s still active. She can be found each week at the Langley Curling Club, on the ice, playing the sport. “We believe that if

you can understand the challenges that people face living with a disability, you can accept and include them in your circle of friends. If you start when you are young it will gradually change our community,” she said. Pos-Abilitites is a non-profit organization started in town eight years ago to help Langley residents change disabilities into possibilities, she explained. It’s intentions are to help local people living with disabilities by providing quality assistive devices for those who could not otherwise afford them, serve as a liaison with other organizations and programs that can help people further their independence, and focus on public education. “We are so excited because we are hoping to be visiting all the schools in Langley with this program, as well as businesses, to work with their staff,” she said. To book a TOAD event or find out more about the organization, go to pos-abilities.org.

Big Brother rallies friends, family to bowl for kids One final charity bowl-a-thon is set for this Friday and Saturday, but more bowlers are welcome. Roxanne Hooper rhooper@langleyadvance.com

As a Vietnamese refugee, Tri Pham has always been grateful for the life he and his family found when coming to Canada almost four decades ago. When he started as a Big Brother a few years back, he hoped it would be a way to give back and to show his appreciation. “I just wanted to help out,” the Willoughby resident said, anxious to pitch in to keep kids out of gangs and on the “right track.” “I think, if I can help just one kid, it’s worth it,” Pham said, noting he and his wife always taught their two children from a young age – now adults – that it’s everyone’s duty to give back. But reflecting on his past three years as a Big, the 62-year-old electrical engineer admits his motivation has become more selfish. It turns out he “loves it,” and Pham said he gets much more out of being involved as a Big and participating in the agency’s annu-

Township of Langley fielded a team last year featuring staffer Bill Storie, Mayor Jack Froese, and Councillors Angie Quaale and Blair Whitmarsh. al Bowl For Kids Sake bowl-a-thon than he could ever give. “Honestly, I do it for myself,” he said. Pham has been a Big Brother to 13-yearold Joe Hao for three years now, getting together at least once a week to share some time and partake in their similar interests of sports, electronics, and circuitry. He describes Joe as shy, and said it took almost a year to “break the ice” with the boy, but now they classify each other as more than just Big and Little. They are friends. They’ve spend time playing badminton and basketball, and Pham has introduced

him to baseball and golf, ironically the pair have never bowled together. However, Pham loves to bowl – not as much for the sport itself, but more for what bowling makes possible. He’s referring to the Bowl for Kids Sake bowl-a-thon happening this weekend in Langley, which serves as one of the biggest fundraisers of the year for Big Brothers Big Sisters Langley. “It’s a great cause,” said Pham, who was the event’s top individual fundraiser last year and typically raised about $2,000 annually in pledges and sponsorships. Next Saturday, Pham will be at Willowbrook Lanes with at least 20 of his friends and family bowling and raising money for this cause that has grown dear to his heart. Pham is fielding one of the 15 teams (of four to six people) already registered for this year’s Bowl For Kids Sake. There’s still time to partake in the western-themed event, with the cut off for registration is today (Thursday, March 8). The bowl-a-thon takes place Friday and Saturday. Each player must reach a minimum of $50 in pledges and register by calling 604-530-5055 or emailing admin. langley@bigbrothersbigsisters.ca.