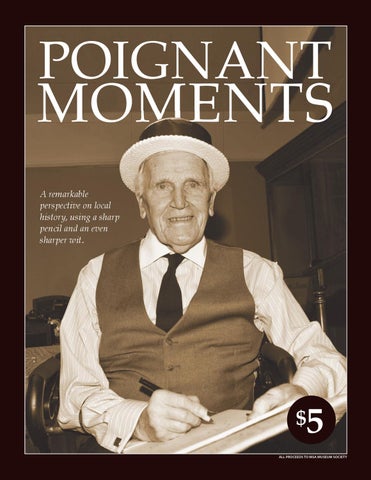 POIGNANT POIGNANT MOMENTS MOMENTS A remarkable perspective on local history, using a sharp pencil and an even sharper wit.

Draw what look likes a big elephant and a baby elephant . . .

. . . and the mother turning around looking at the baby — but it’s not the baby, it’s the keeper!

In over thirty years of doing my chalk talks, little Billy really got to me as no one else ever has. Just three days before Christms that year, I was visiting Canuck Place and doing my chalk talks for the children there. Little Billy, just ﬁve years old, was a very sick boy and just wouldn’t smile at all. But as I sketched the different animals on sheets on paper on the easel, all of a sudden Billy commented that the little elephant hadn’t a tail. I was amazed because in over twenty years I’d been doing this partiular chalk talk, no one had ever noticed that. In fact, I had to redraw that particular chalk talk two more times so Billy could tell others who came into the room about that little elephant without a tail. Incidentally, in my chalk talks, the illustration is designed to be deceiving — you try to fool people as to what it will eventually turn out to be. Now Billy was so thrilled about detecting that obvious error in my drawing, he actually smiled! A few weeks later when I phoned Canuck Place and asked about little Billy, I was told he had died in January. I am sure he’s still smiling up there in heaven.

PRODUCED BY THE ABBOTSFORD NEWS PRINTED BY VAN PRESS PRINTING Special thanks to MSA Museum Society for providing and coordinating the material necessary to produce Poignant Moments. ALL PROCEEDS FROM THIS BOOK WILL GO TO MSA MUSEM SOCIETY COVER PHOTO PROVIDED BY PHOTOGRAPHY BY DAVINA

Copyright and/or property rights subsist in all cartoons and in all other material appearing in Poignant Moments. Permission to reproduce wholly or in part and in any form whatsoever, particularly by a photographic or offset process in a publication, must be obtained in writing from the publisher. Any unauthorized reproduction will be subject to recourse in law.

THE WORLD OF ERNIE POIGNANT Welcome to the world of Ernie Poignant, a man of enduring passion who provides a remarkable perspective on local history, using a sharp pencil and an even sharper wit. The cartoons in this book are each unique and charming short stories from a gifted man who has always had a clear understanding of the past. Ernie was born in a Matsqui farmhouse less than three months after World War One ended. He was a boy in an era without plumbing and electricity, living with his parents, brother and sister in a home heated by wood and lit by candles. It was a simpler time in the nowdefunct community of Ridgedale, an area that used to be north Matsqui, near the Fraser River. It was settled by Swedes and Norwegians between the late 1890s and the early 1900s. While just a young boy, his grandmother showed Ernie how to draw. She drew a stick man and asked him to copy it. Young Ernie started with a stick man and soon was doing much more. He began sketching and was using his natural talents to draw cartoon characters. Ernie’s lifelong love with pencil and paper was born.

artist, entertaining everyone from kids to seniors at venues ranging from church basements to Alaskan cruise ships. Upon returning in 2003 to Abbotsford, Ernie has used his ﬁrsthand knowledge and artistic skills to become a valued local historian. From his work as a veteran with the Second World War Memory Project through to this venture on the 150th anniversary of the creation of the territory of British Columbia, Ernie Poignant is even more inspired because he is living in the same area where he grew up. He has also produced dozens of editorial cartoons for the Abbotsford Times and the Abbotsford Post. Some are a candid and unique look at life in Abbotsford today, while others blend the present with the past from a senior’s perspective.

Our history is a treasure that Ernie is truly passionate about. He has encyclopedic recall about dates and events that leaves My grandmother, Hulda Poignant gave me my first art lesson - how to draw a stick observers truly amazed. Although he man. does carry a cellphone, he only uses it for talking. He is adept with the TV remote control, but still shuns the computer. Ernie, whose knowledge Cartooning became a hobby growing up. The sketches gave him a welcome break. After all, Ernie was up by 4 a.m. most of current events is remarkable, always prefers a face-to-face days to get his chores done on the family chicken farm. conversations. Following breakfast, he would head off for the two-mile walk That infectious, boyish enthusiasm rubs off on everyone he to school. meets. Ernie says the reaction he gets from people is what he After the Great Depression, Ernie enlisted in the army during ﬁnds so satisfying. His delivery, accompanied by his sketches, the Second World War. While stationed at Ontario’s Camp create a magical mix that are simple and often poignant. Borden, Ernie’s hearing was permanently damaged when a live mortar exploded near him during training. He ended up The cartoons featured here follow that same pattern. serving his country at Camp Borden, the Abbotsford airport and at a base near Victoria, B.C. Several of his one-frame He is never without a pencil or pen. Even when Ernie is not cartoons appeared in military publications during the war. performing as a chalk-talk artist or drawing a cartoon, he is Ernie had a cartoon appear in Canadian Poultry in 1940 and also in the Swedish Press division based in Vancouver in 1947. He later moved on to a full-time printing job where he would moonlight as the editorial cartoonist at the Cariboo Observer in Quesnel ﬁrst and later the Maple Ridge Gazette. Ernie, who became a Christian along with his wife, Rose in the mid-1960s, utilized his faith while becoming a chalk-talk

constantly thinking of new ideas. He doodles whenever he gets a free moment, perhaps using a napkin at the McDonald’s restaurant or the paper menu at a Chinese eatery. He takes a common occurrence and, with his unique perspective, compares it to the past. The ﬁnal result becomes a very special window on our history. — Gary Poignant, 2012

Conversations that may have occurred at the Gifford Fair in early 1930s.

Eventually the Gifford Fair was moved and became the Abbotsford Agrifair.

When Ernie approached the Abbotsford Neighbourhood Bugle about drawing cartoons for us, we leapt at the chance because we already knew the quality of his work from the time he lived in Maple Ridge where the Bugle’s sister paper was located. Ernie draws from earthy observations about the world around him. They were certainly clever and often poignant, so when it came to giving the new feature a name – it was pretty much a no brainer to choose “Poignant Moments” as the title.

The delightful whimsy of Ernie Poignant’s cartoons speak of a quieter, gentler time. Ernie is one of a kind. — Graham Harrop, Vancouver Sun Cartoonist Poignant family in December 2011

“Ernie’s infectious, boyish enthusiasm rubs off on everyone he meets.”

At the Centennial Community Centre where Ernie received a Lifetime Achievement The first of hundreds of illustrations drawn over 75 years. This illustration was drawn in 1937.

Ernie admiring his wind-up train and the boat

Award from the Art Council in October, 2011. From left: Ernie’s son Gary, Ernie

with his wife Rose and their daughter, Valerie Wylie.

ROSE’S KITCHEN acted as a sounding board for my ideas, her biggest sacriﬁce was giving up the kitchen table so I could pursue my passion with pencil and paper. “Ernie, you need to move your paper off the table,” was the mantra from my loving wife before every meal. While her excellent cooking was certainly incentive enough to stop drawing, I would never hesitate to clear my cartooning ‘stuff’ and place it in a box nearby. Switching from a pencil to a fork gave me a chance to chew on my latest ideas and share them with Rose. The comfort of the kitchen combined with my wife’s feedback was the perfect combination for a large number of the cartoons in this book. She’s been my driver, my inspiration, my critic and my best friend. For most of the past 58 years I sketched these cartoons at her table between breakfast, lunch and dinner. Rose, my wife of almost six decades, sacriﬁced a lot to allow me to entertain with my drawings and chalk talks. And while she did drive me to countless functions and

Rose didn’t miss a beat raising our two children as I carried on my passion for cartooning. She always found time to take me - a man without a driver’s license - to drawing functions, often juggling child-rearing with household chores. My success would not have been possible without her. Thanks to Rose and her kitchen. — Ernie Poingnant, 2012

We’re heading back to Quesnel for the hundredth anniversary of the Cariboo Observer on Aug. 27th, ‘08