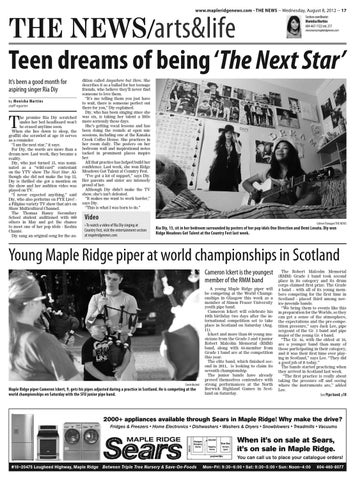 he promise Ria Diy scratched under her bed headboard won’t be erased anytime soon. When she lies down to sleep, the grafﬁti she scrawled at age 10 serves as a reminder. “I am the next star,” it says. For Diy, the words are more than a dream now. Last week, they became a reality. Diy, who just turned 15, was nominated as a “wild-card” contestant on the YTV show The Next Star. Although she did not make the top 12, Diy is thrilled she got a mention on the show and her audition video was played on TV. “I never expected anything,” said Diy, who also performs on FYE Live! a Filipino variety TV show that airs on Shaw Multicultural Channel. The Thomas Haney Secondary School student auditioned with 600 others in May and got the chance to meet one of her pop idols - Keshia Chanté. Diy sang an original song for the au-

dition called Anywhere but Here. She describes it as a ballad for her teenage friends, who believe they’ll never ﬁnd someone to love them. “It’s me telling them you just have to wait, there is someone perfect out there for you,” Diy explained. Diy, who has been singing since she was six, is taking her talent a little more seriously these days. She’s getting vocal lessons and has been doing the rounds at open mic sessions, including one at the Kanaka Creek Coffee House. She practices in her room daily. The posters on her bedroom wall and inspirational notes tacked in prominent places inspire her. All that practice has helped build her conﬁdence. Last week, she won Ridge Meadows Got Talent at Country Fest. “I’ve got a lot of support,” says Diy. Her parents and sister are intensely proud of her. Although Diy didn’t make the TV show, she’s isn’t defeated. “It makes me want to work harder,” says Diy. “This is what I was born to do.”

Video • To watch a video of Ria Diy singing at Country Fest, visit the entertainment section at mapleridgenews.com.

Ria Diy, 15, sit in her bedroom surrounded by posters of her pop idols One Direction and Demi Lovato. Diy won Ridge Meadows Got Talent at the Country Fest last week.

Maple Ridge piper Cameron Ickert, 9, gets his pipes adjusted during a practice in Scotland. He is competing at the world championships on Saturday with the SFU junior pipe band.

A young Maple Ridge piper will be competing at the World Championships in Glasgow this week as a member of Simon Fraser University youth pipe band. Cameron Ickert will celebrate his 10th birthday two days after the international competition set to take place in Scotland on Saturday (Aug. 11). Ickert and more than 60 young musicians from the Grade 3 and 4 junior Robert Malcolm Memorial (RMM) band, along with 44-member from Grade 1 band are at the competition this year. The elite band, which ﬁnished second in 2011, is looking to claim its seventh championship. The junior bands have already proved themselves contenders with strong performances at the North Berwick Highland Games in Scotland on Saturday.

The Robert Malcolm Memorial (RMM) Grade 3 band took second place in its category and its drum corps claimed ﬁrst prize. The Grade 4 band – with all of its young members competing for the ﬁrst time in Scotland - placed third among novice-juvenile bands. “We bring them to events like this in preparation for the Worlds, so they can get a sense of the atmosphere, the expectations and the pre-competition pressure,” says Jack Lee, pipe sergeant of the Gr. 1 band and pipe major of the young Gr. 4 band. “The Gr. 4s, with the oldest at 16, are a younger band than many of those participating in their category, and it was their ﬁrst time ever playing in Scotland,” says Lee. “They did a good job of it today.” The bands started practicing when they arrived in Scotland last week. “The ﬁrst practice is really about taking the pressure off and seeing where the instruments are,” added Lee. See Pipe band, p18